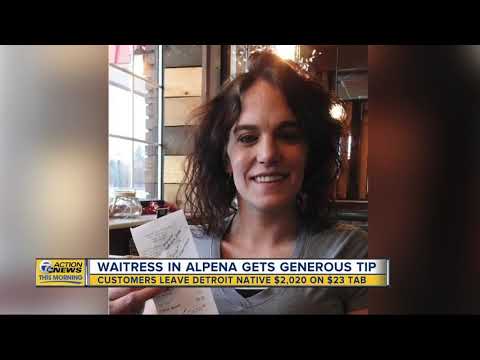 Formerly Homeless Waitress Gets $2,020 Tip On $23 Meal, And Not Because Her Customers Are Bad At Math

A single mom and waitress got the shock of her life when she received a $2020 tip on a $23 tab while working at Thunder Bay River Restaurant in Alpena, Michigan.

“I’m going to build a future because of this. My kids have a future and I have a home,” says Danielle Franzoni. “It’s a big deal. It’s a really big deal.”

Franzoni, who has three children and another on the way, is two years in recovery from an opioid addiction. She moved to Alpena from Detroit to start over and get sober, she said. When she moved, she stayed in a homeless shelter before finding work at the restaurant.

“I had actually woke up at 4 o’clock that morning to my neighbor’s house being engulfed in flames. So I was emotional,” Franzoni said.

“They wrote on the receipt Happy New Year Danielle 2020 tip challenge. I cried. I started crying and went right to my manager and asked if this was real. I’m still in complete shock. That doesn’t happen to people like me.”

Franzoni says the generous tip is helping her get chance to make the life she wants for herself and her children.

“It’s a blessing. I’m trying to bring my kids home. I’m trying to do right, and I’m a server. I don’t make great money you know […] I moved into my own house today. That was able to happen. I did that today,” Franzoni explained.

For the first time in ten years, Franzoni will be able to get her driver’s license, which will allow her to see her children and teach her daughter to drive.

She also didn’t waste any time paying it forward, too. She went out to dinner that same day to celebrate and joined the #2020TipChallenge by leaving a $20.20 tip for her server.

Franzoni says she never got to thank the regulars who left the life-changing tip, but she hopes that they know they helped her get her life on track.

“They gave my kids a life that they don’t even know that they didn’t have,” Franzoni said. “And I have a chance.”

The post Formerly Homeless Waitress Gets $2,020 Tip On $23 Meal, And Not Because Her Customers Are Bad At Math appeared first on Tank's Good News.

Formerly Homeless Waitress Gets $2,020 Tip On $23 Meal, And Not Because Her Customers Are Bad At Math