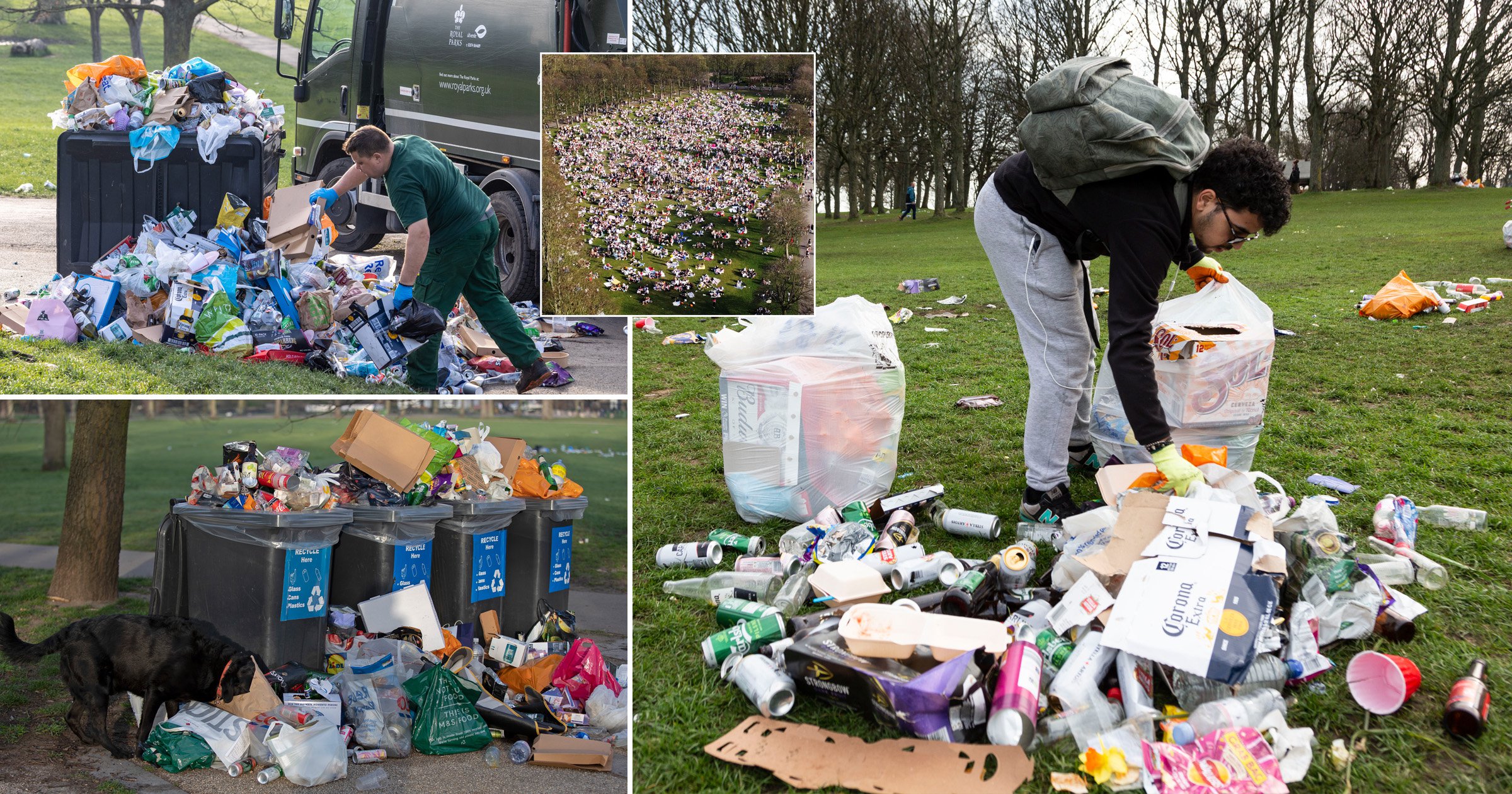 Piles of litter have been left behind on parks and beaches by people out for the first days of lockdown easing.

Bins overflowed, with bottles, bags and cans left on the ground next to them and strewn around on the grass.

In Nottingham’s Forest Recreation Ground, where large crowds gathered yesterday, the amount left behind was described as a ‘disgrace’.

We previously reported how local police had banned people from bringing alcohol to the city’s parks – but it appeared to have done little to stop the mounds of rubbish.

A resident living close by hit out at ‘selfish people’ who didn’t clean uop after themselves.

Andrew Curzon, 24, who was jogging through the park, said: ‘It’s an absolute disgrace. It’s not hard to take home what you brought.

‘It’s a real blight on the city and we’re being let down by selfish people.’

Meanwhile in Birmingham, people were also making the most of the sunny conditions after Monday’s easing of coronavirus rules, which means groups of up to six, or two households, are now able to socialise in parks and gardens and that outdoor sports facilities can reopen.

Adam Jones, from Moseley, said he saw a ‘couple of thousand’ people convened in Cannon Hill Park, to the south of the city, while out walking with his girlfriend on Tuesday evening.

‘It has been noticeably busier since restrictions eased but yesterday was really busy,’ the 27-year-old said.

‘While there were a fair few people in small groups respecting distancing, they were overshadowed by lots of big groups, sometimes up to 20 to 25 people, blaring music.

‘We did one lap of the park and by the time we were leaving it looked like a festival.

‘How it looked this morning was disgraceful – so much rubbish that a council worker estimated it would take the whole team most of the day to clear.’

In the Lake District, furious volunteers criticised lockdown visitors after they had to clear 13 bags of rubbish from a makeshift site a Thirlmere where they feared people had travelled to stay overnight, despite this being banned until April 12.

She added that it showed a ‘sheer disrespect’ for the area and those who live there.

Ms Bolton said: ‘Not all visitors behave this way thankfully, but I don’t think this will be the last of scenes like the one at Thirlmere.

‘People should follow the countryside code and always leave no trace.’

Temperatures soared to almost 20C on Longsands Beach in Tynemouth, North Tyneside, yesterday drawing visitors to the area in droves.

But there were dismal scenes on the sands the following day – with cans, coffee cups and plastic bags scattered across the shore.

One sickened onlooker said: ‘It’s heartbreaking to see. This is one of the most beautiful beaches in our region.

‘We’re very lucky to have access to such a stunning coastline. It is so upsetting to see so much rubbish.

‘People should have more respect for nature, and stay away, if they can’t clean up after themselves.’