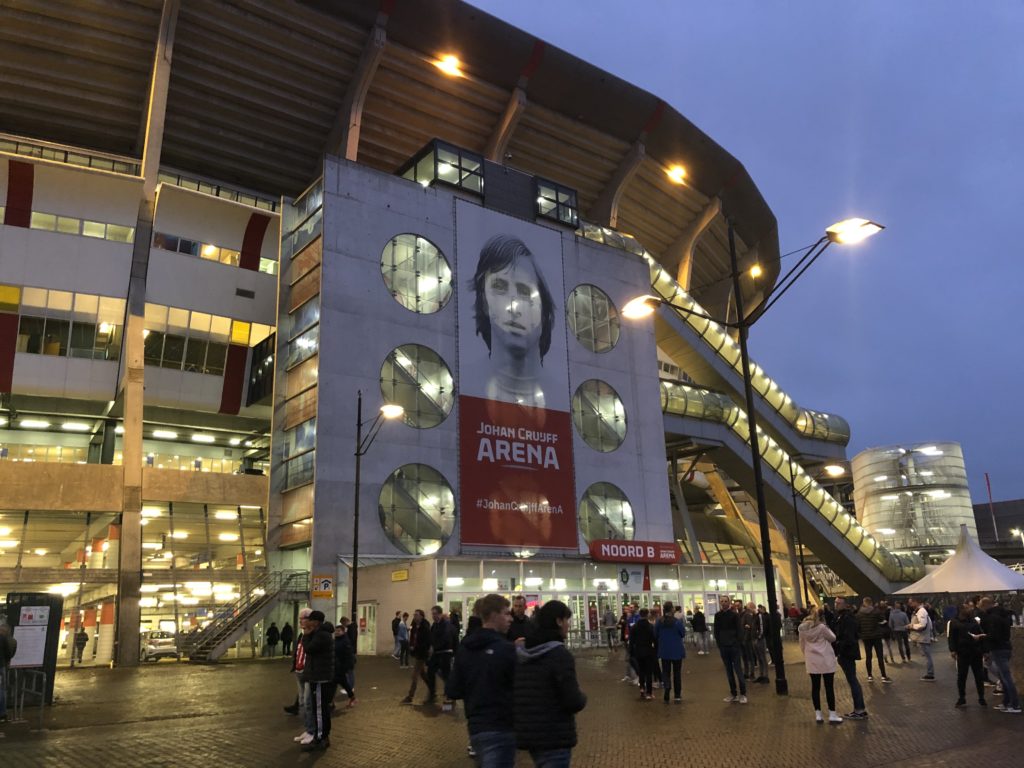 A Beggar For Good Soccer: The Low Countries

Jessica heads to The Netherlands before circling back to England

After two weeks of games in the United Kingdom, it was time for a quick trip to mainland Europe. I flew in to Eindhoven in the Netherlands on the day of the PSV Eindhoven vs AFC Ajax match. The city was full of red and white, the colors of both teams playing that day. During the short walk from the city center to Philips Stadion, I tried my best to stay out of the way of everyone riding their bikes to the game – the preferred mode of transport.

The atmosphere at De Topper, PSV’s biggest home match of the season, was a departure from what I had been experiencing in the UK. It reminded me of the Bundesliga matches I have attended in Germany – with giant flags, flares letting off smoke in the team’s colors, and Ajax players taking throw-ins and corner kicks being pelted with cups of beer from the fans. Quincy Promes gave Ajax the lead in the 63rd minute, but Donyell Malen equalized for PSV in the 77th. The match ended in a 1-1 draw.

From Eindhoven, I took a train north to Amsterdam for my first visit to Johan Cruijff ArenA. AFC Ajax were playing Fortuna Sittard, a team which escaped relegation by only one point last season. It was 0-0 at halftime, but Ajax exploded offensively in the second half. Quincy Promes scored a hat trick as Ajax won 5-0.

My final stop in the home of totaalvoetbal was Rotterdam. Heavy rains did not deter fans from attending the Thursday night Feyenoord vs AZ Alkmaar match. Manager Jaap Stam’s home side was unable to break through in the sloppy affair, losing to AZ 3-0.

After six days in the Netherlands, I returned to London for my final six matches in England. My first destination was Tottenham Hotspur Stadium for Spurs’ Premier League matchup with Southampton. Despite having Serge Aurier sent off in the 31st minute for two yellow cards offenses, and a Hugo Lloris blunder that allowed Danny Ings to put Southampton on the board, Tottenham won the game 2-1.

I spent my Sunday in Stratford at the first-ever Women’s Super League match at London Olympic Stadium. Tottenham Women beat the hosts, West Ham Women, 2-0 in front of 24,790, the second largest crowd ever for a WSL match.

A Beggar For Good Soccer: The Low Countries