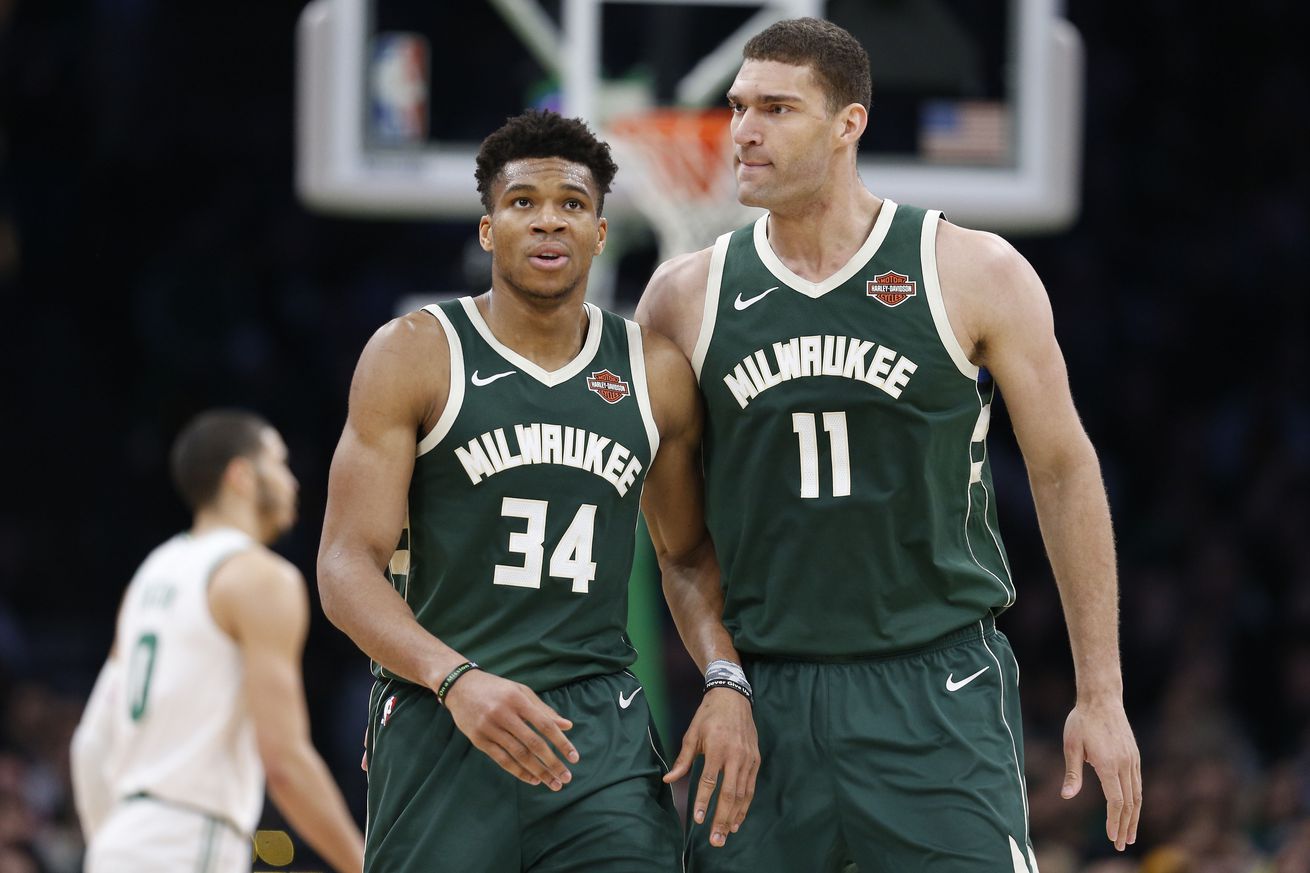 Playoffs from the outside: Bucks surge forward, Nuggets even series

The Bucks establish their dominance while the Warriors work to slow down the Beard.

As the NBA playoffs roll on, both conferences are enjoying tight competitions, with the current statuses leaving us with questions as well as answers.

1) What do we know, midway through the 2nd round of the playoffs?

Mark Bruty: That Billy Donovan isn’t going anywhere. That Presti will somehow manufacture a way to find us a shooter. That Nerlens Noel & Markieff Morris are highly unlikely to be back.

Nile McNair: What we know at this point is Kawhi will score 30+ on whoever the Sixers have guarding him. Also, we knowing this is now a three game series with two games potentially being in Toronto.

Phil Naessens: When LeBron James left Cleveland, many assumed the Boston Celtics would be the team to challenge the Warriors. The Celtics were supposed to be that team after repeat Conference Finals appearances. Pundits raved over Brad Stevens and anonymous GM’s even claimed Stevens was a better coach than Gregg Popovich. I wrote about Stevens getting to prove that I was wrong about him (I’ve always believed he is over-hyped). Heck, the Celtics narrowly missed defeating LeBron James and the Cleveland Cavaliers without Kyrie Irving and Gordan Hayward. Now we get to watch him coach his team against the Milwaukee Bucks and what we know is;

Dom Flaim: We know Golden State is the best collection of top tier talent in recent, if not all time NBA history.

Ryan Harris: I know that Denver can do this. That was an unknown a few weeks ago when the Nuggets were a talented young team with no playoff experience. They split in Portland and the other game could have gone either way in 4 OT. This has been the most evenly matched series of the conference semifinals so far and I expect seven games.

I know that Kawhi Leonard is a top five player left in these playoffs. That doesn’t mean that it will be enough to get Toronto to the finals though.

I know that the Bucks have figured out how to win in the postseason. They won their first series as a group in the first round against Detroit. That series was more of a foregone conclusion than a series though. Milwaukee didn’t play well in game one but have bounced back the last two games and look like the team everyone expected them to be in the playoffs. This team should make it to the NBA Finals if Giannis continues to be aggressive and draw fouls. The only way Boston can slow him down at all is by employing their “wall” tactic they used in game one. Even if they do that, the Bucks have plenty of shooters on the perimeter.

I know the Warriors are going to win this series. Once again, I would love to see seven games here. I would love to see seven games in all of the series, but the Warriors aren’t going to lose. They know this could potentially be their last season with Kevin Durant, plus they have this whole “do it for Oakland” thing going on since the team is moving to San Fransisco next year. Houston might be able to hold on and make it close, but they won’t win the series.

2) What do we not yet know in these playoffs?

Mark: Whether Steven Adams will develop into a three point shooter (I’ve seen him make a number of them in practice). PG’s shoulder and any off-season surgery. When (and in what form) will Roberson be back.

Nile: We don’t know what Joel Embiid will show up. The one who is unhealthy and puts forth a lackluster performance? Or the Joel that looks 100%, and performs the way he did in Game three. Additionally, we don’t know when and from who will do the other scoring from the Raptors, but if they want to win this series they will need consistent scoring from the likes of Siakam, Gasol, and Lowry.

Phil: What we don’t know about this series is how Boston will respond in game five at Fiserv. Can Milwaukee close this thing out or can Brad Stevens and his Celtics pull a rabbit from their hats?

How do the Celtics stop Giannis Antetokounmpo from going wild Wednesday night at Fiserv? Al Horford has been great on Giannis but Antetokounmpo is absolutely killing Aaron Baynes. Where is Semi Ojeleye and why isn’t he playing in this series? Last season Stevens used Ojeleye and his length to frustrate Antetokounmpo. It worked perfectly and Stevens was lauded as a genius.

Khris Middleton is shooting 48 percent from long-range during this series. Were the adjustments they made holding Middleton to just 31 percent at TD Garden enough to carry over in game five at Fiserv? Marcus Smart returning from injury was huge but was limited to just 15 minutes.

Boston was fourth in the NBA this season with 14.7 turnovers per game and currently averaging 14 per game during the playoffs. That number went down to just 11 in game four. Boston will need to be that incredibly precise with the basketball on Wednesday night at Fiserv as the Bucks is averaging 16.5 points per game from Celtics turnovers this series.

Dom: We don’t know if their focus might want just a touch too long or if any east team (Milwaukee?) can challenge. I get a real 2015 Warriors vibe from the Bucks and Golden State’s bench worries me against a team that good.

Ryan: I don’t know if Denver can close a game without leaning on Will Barton. He is a good safety valve to have late in games, but one of Jamal Murray, Gary Harris or Nikola Jokic needs to carry them down the stretch. Ideally a combination of all three. If this series goes seven games and the score is close in the last few minutes, my guess is Portland will be able to shut down Will Barton if it comes to that.

I don’t know anything about this Raptors-76ers series yet. We are four games in and it’s tied 2-2. Siakam has been hurt, Embiid has been sick, Kyle Lowry has been inconsistent, which isn’t a surprise but adds to the fact that all four games have been vastly different. Toronto has the best player in the series, but if Siakam continues to play like he did in game four, it might not be enough.

We don’t know if Malcom Brogdon will play or when he will play. We do know the Celtics will get Marcus Smart back for a must win game four down 2-1. I could see Smart being the difference maker in this series. He is one of the most aggressive players Boston has, and the Celtics have to be much more aggressive if they want to win the series.

I don’t know how many games this Warriors-Rockets series will go. I think Golden State could end it in five if they really wanted, but I think it’s more likely the home team takes every game in this series.

3) What do we think, but know we might be wrong?

Mark: Ferguson is going to be a monster next year. Diallo too. If 2Pat comes back, with a full pre-season and defined role, he could be the Toronto 2Pat we thought we were getting. Russ is going to shoot better, by shooting less.

Nile: I think we all still believe talent will prevail in this Philly-Toronto series and the Sixers will win. In addition, we still believe that these are the same Raptors of years past and they will eventually fold. However, I would be shocked if the Raptors lose game five and I still believe they will beat the 76ers in seven games.

Phil: I think the Milwaukee Bucks finish this series on Wednesday night and that will finish this rendition of the Celtics. The Boston fans booed their hometown heroes and I think if there was even a glimmer of hope in Irving returning to the Celtics, those boos ended that. Irving leaves the Celtics and joins his buddies Tyronn Lue and LeBron James in Los Angeles and they return the Lakers to greatness. Al Horford will opt out of his 30-million-dollar contract to take a lot less money to win a ship with the Warriors. Stevens will resign with the Celtics and emails will reveal that Ainge rigged the anonymous coach’s poll to make his guy look better than he was so he wouldn’t have to pay him top dollar.

As for the Bucks? Milwaukee will hammer whoever they play in the Eastern Conference Finals and go on to win the NBA Championship. Mike Budenholzer should be named NBA Coach of the Year and Giannis should go on to win the NBA MVP award AND the Finals MVP. The Bucks bring back Nikola Mirotic and extend the contracts of Pat Connaughton and Sterling Brown and create a dynasty in Milwaukee.

Dom: We think KD is gone either way. You never know with him, but looking at all the clues from both himself and teams around the league, I’m getting real 2016 deja vu.

Ryan: I think Denver can do this, but I’m not sure. They have the talent and the depth. They closed out San Antonio in game seven at home. I think they can do the same against Portland. I’m just not sure. Either way I think this series will go seven games and I won’t be upset at the result. I have loved watching this series so far.

I think Philadelphia will find a way to win their series. That feels risky because that means they have to close out Kawhi Leonard, but I can’t bet on Lowry in the playoffs and Siakam may not return to form with his injury. The key for Philly will be getting Embiid healthy again. He supposedly didn’t sleep the night before game four and needed an IV before the game. This one has seven game potential as well.

I think the longer this series goes the better chance Boston has, but as we saw tonight, their hopes are shrinking rapidly. The Bucks still haven’t played in a close playoff game late (the end of game three never felt close, in my opinion) and I am intrigued to see how they respond.

I think the Rockets series will cause Houston to look at what they need to change over the summer. James Harden has a handful of years left at his best, but he is in the middle of his prime right now. The Rockets have to look at what comes after Chris Paul, and even maybe convince CP3 to restructure his contract at some point. The most important thing they can do, and what is most likely, is keep tabs on Harden this summer. He came back last fall a little over weight and it caused the Rockets to get off to a slow start. That, in turn, resulted in the Rockets getting the four seed and having to face Golden State in the second round.

Playoffs from the outside: Bucks surge forward, Nuggets even series