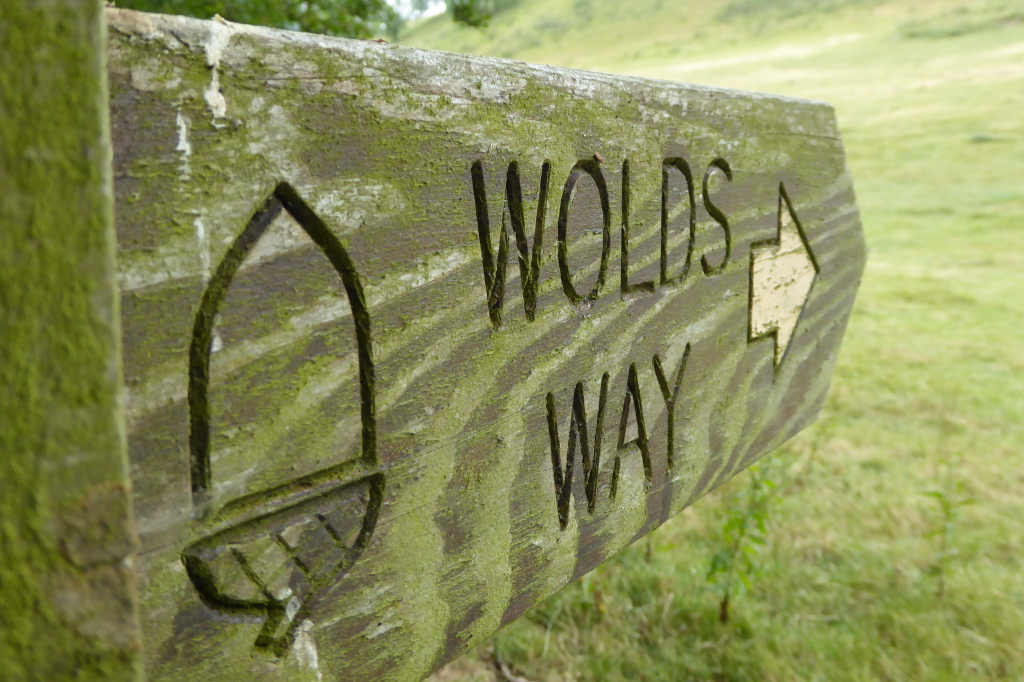 For 79 miles/127km, the Yorkshire Wolds Way runs from Hessle, near Hull, to Filey. One summer I walked it with a man called Tal, over five days. Days one to three saw brilliant weather. Day four, less so. But grey skies,and a drop of rain, proved difficult to spoil one of the best views on the whole of the Yorkshire Wolds Way.

The sky was grey. There was a chill to the air. There was even some drizzle. The kind that made us contemplate if it had been wise to have packed our jumpers and jackets in our suitcases. That it was possible they’d be more useful in our rucksacks than in the van transporting our luggage to our next B&B.

After three days of walking in baking heat, with hardly a cloud in the sky, this was all a bit of a surprise. Indeed, for several weeks the weather had been abnormally dry, and unusually hot. It felt like the good weather would never end. There was even talk of hosepipe bans. But today the sun didn’t have its hat on. Indeed, for most of the day, it had completely disappeared. There was even a little drizzle, although that only lasted a few minutes. It started during our taxi ride back to Wharram-le-Street, and finished not long after we got out of the car.

The cloud would only lift as we arrived at our B&B late afternoon. Round about the same time that we were sitting in their garden with a pot of tea and a slice of homemade cake. But all that was ahead of it.

Our first few miles focused on barley and wheat. We strode along field after field of crops, each one with wild flowers growing the field borders. There were little in the line of views. High hedges at the edge of each field prevented us from seeing much. Staring at crops it was.

For the first few days the fields of wheat and barley had been a delight to see. We’d spend time watching the wind blow over them; each stalk waving in the breeze. It was all rather delightful, almost enchanting. I took videos of it on my phone. Had ideas of uploading videos to YouTube called “Wheat of the Wolds Way”. But today, faced with endless fields of it, and not much else to see, it felt rather dull. Borderline tedious. Maybe there are only so many arable crops one can look at.

We walked past a deserted set of barns, all dry and dusty. They looked abandoned. Like someone had walked away one day and then forgotten they existed. No doubt at harvest time they sprang into life as combine harvesters roared into action. But right now they were silent and still.

Beyond lay an empty road and a small plantation, in the entrance of which sat an Ordnance Survey trig point. I’d once read that from any one trig point you can see three others if you know where to look. There was no chance of that happening here. This trig point was sat surrounded by trees. It was a struggle to see it even when you were right next to it. True, it didn’t matter.  These days the Ordnance Survey use more modern technology to create their maps. But hey, that’s not the point.

A wide track took us through trees. As we walked, Tal and myself chatted about which B&B had served the best breakfast on the trip. And then followed it up with thoughts and opinions on 1980s BBC weather presenters. Well there was little need to pay that much attention to our surroundings, so why not?

But then, oh boy! A view! And what a view! The path abruptly came out of a thick tunnel of trees and burst out of cover at the top of the hill. And as it did, it revealed a wonderful sight of the village of Wintringham, the Vale of Pickering, the North York Moors and a lot more beyond.

It’s hardly an original statement to say that England’s countryside is like a patchwork quilt. Hey, I’ve already used that term when writing about the Yorkshire Wolds Way. But it’s the perfect description of what we could see. A magnificent panorama of villages and fields; each field a different hue. A veritable feast for the eyes and no mistake.

And at the perfect spot from which to soak in this view, there was a bench. I’d be amazed if it’s not the most used bench on the whole trail. And, well, we had to use it, didn’t we?

A mile or so on a metalled lane and we were at Wintringham. It’s a small village, but spread out as most of the houses sit on the main road.

At the western end stood St Peter’s Church. Most of the church building dates back to the 14th century, although parts are even older. It was also one of the larger churches we walked past. Indeed it ended up being too large for the community it served. Which is why, in 2003, it hosted its last act of worship, and has been dormant ever since.

Now it’s looked after by the Churches Conservation Trust, and is open to the public. And, well, it would have been rude not to visit. I popped my head into admire the carved pews and elaborate stone carvings.

I may be a committed atheist, but I do like looking at old churches. They’re often some of the most interesting architecture in a local area, and a great social leveller. Great buildings that were open for all the people, be they rich or poor. With church attendances falling, many are closing up, and face a less than certain future. But at least this wonderful building survived for future generations to enjoy.

Next time: a mighty forest, a curious work of art, the Vale of York and an extremely large amount of scampi.