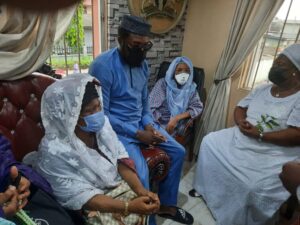 Seyi, while granting interview with newsmen at their Ilupeju resident, said his father died as a progressive politician, and also revalidated his membership with All Progressives Congress, APC in the ongoing registration and validation exercise, before he died.

He said the former governor died in his sleep on Thursday, around 11am at his residence.

According to him, his father lived a fulfilled life and had left a big vacuum in society due to his kindness, philanthropic lifestyle and service to humanity.

“He revalidated his APC membership on Wednesday, and this morning, he had his breakfast and slept, but around 11am, his aide observed that he was no longer breathing so, he called for medical personnel to examine him.

“However, medical personnel later confirmed that he was no more.”

One of the daughters, Ganiyat Bola Jakande, said his father’s death was a great loss and he will forever be missed for his impact and contributions to the society, most especially, Lagos State.

She stated: “My father was very caring, loving father and at the same time he was a disciplinarian, he was no nonsense person, and his love for less previleged people can not be compared to none.”

One of the sisters of the deceased, Mrs Omololu Osinuga, described his late brother as loving and caring person who was companionate in serving humanity.

Osinuga who came in from America last week Friday to see his late brother, also said that her last moment with him will linger forever.