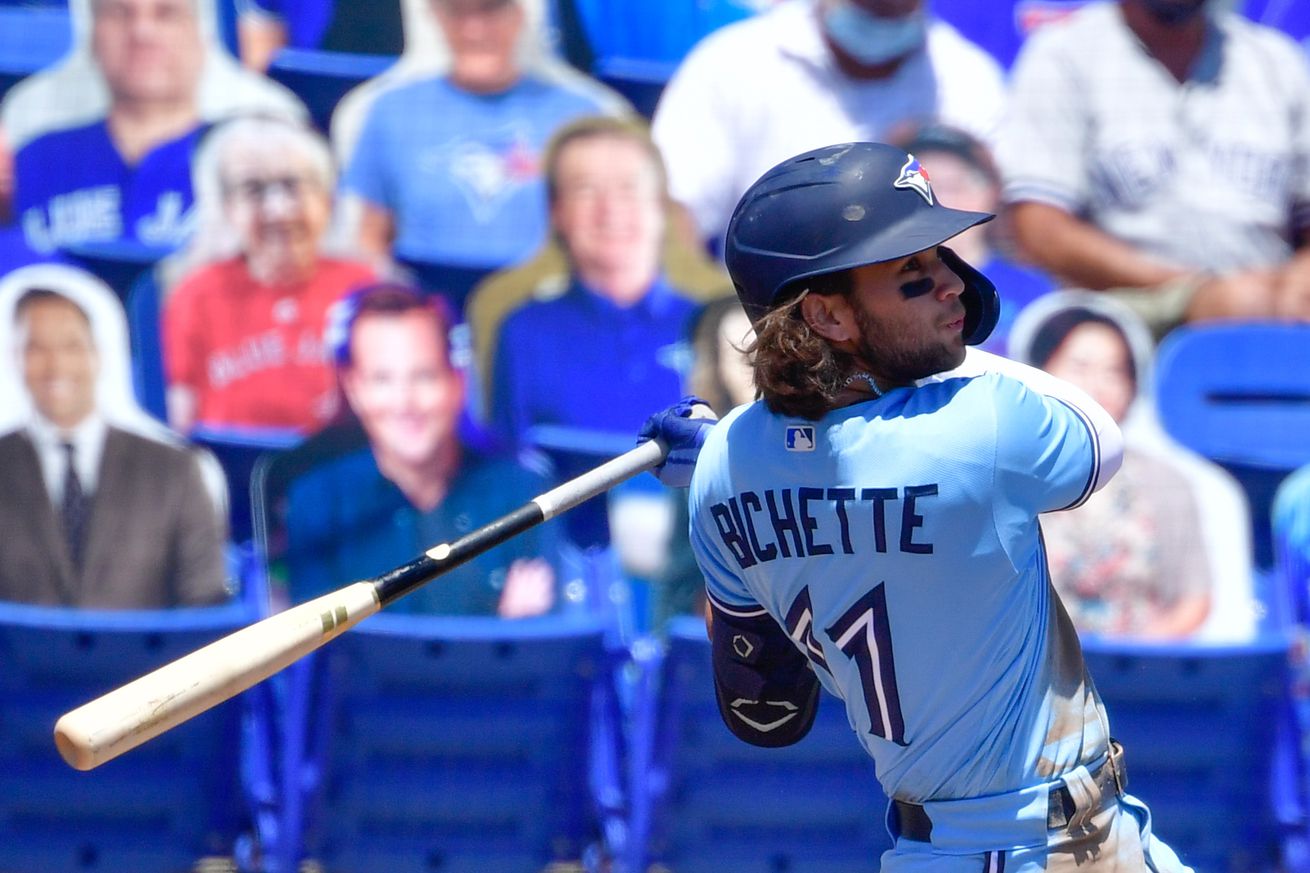 Toronto Blue Jays Series Preview: Don’t forget the Royals have won the ALCS twice against them

If your dad played in the big leagues, you probably play for the Blue Jays.

The Toronto Blue Jays come to town for a scheduled four-game set (though weather might change that) as one of the teams in the American League that many believe has a chance to be very good. While they aren’t entirely made up of sons of former big leaguers (and other professional leagues around the world), they do have a really nice young nucleus of talent that they’ve been supplementing with outside talent over the last couple seasons. Last season, it resulted in a playoff trip in the expanded postseason, but they have eyes on a bigger prize this year.

That’s partially because they think their young players are ready to be impactful deep into October, but also because they’ve gone out and picked up Marcus Semien to play second base and George Springer to play center. Springer has been injured and hasn’t yet suited up for the Blue Jays, but he figures to be a difference maker when he takes the field. Their offense doesn’t need him, though, to be great, as they already are. Bo Bichette is a burgeoning star and while Vladimir Guerrero, Jr. hasn’t been what many hoped he would be yet, he’s off to a very fast start this season. With other very good pieces around them, this is an incredibly difficult lineup to handle.

The pitching staff isn’t quite as home grown, somewhat due to injuries, but they still have gone out and worked to build a good rotation. They signed Hyun-Jin Ryu before last season and all he did was finish third in the Cy Young vote in 2020. They traded for Steven Matz before this year after a down year and they retained Robbie Ray who was up and down last year between the Blue Jays and the Diamondbacks. They did just lose one of their key relievers, Julian Merryweather to an injury just the other day, but they have some arms in the bullpen as well. This is a good team. They may not quite be the cream of the crop, but their talent isn’t going anywhere.

Note: This is probably the second to last series with 2020 stats, so buckle up for some current information soon!

This start could go to Ross Stripling who was scratched yesterday. Or they could call up Anthony Kay. But right now, Tanner Roark is the guy, so I’ll update if that changes. When Roark was with Washington, I was pretty convinced he’d one day be a part of the Royals, but so far, so good on that front. He was really quite solid for awhile, even finishing in the top 10 of the National League Cy Young vote in 2016, but then looked like he might settle in as a back end guy. After being perfectly adequate in 2019, the Blue Jays signed him to a two-year deal because they needed pitchers and his 2020 was a disaster. He’s made one start this year and it was another disaster. He went from a heavy sinker guy to throwing his four-seam more, which I’m not sure if that was by design or what, but it hasn’t worked. He does get a lot of spin on his curve and it’s a solid pitch for him, but if he’s not working with his sinker, he’s just very hittable. The Royals are probably hoping for him on the mound.

Jakob Junis gets his second start after he was so good against Cleveland last week. He only needed 58 pitches to get through five innings against the Indians, but they aren’t an especially good offensive team. The Blue Jays are a great test for him and his new cutter, even without some of their offensive firepower. Blue Jays hitters haven’t seen a lot of cutters this season, but what they have seen, they haven’t been good against them. That’s a good sign for Junis. It also helps that this game will be in Kansas City and not the bandbox that is the Blue Jays temporary home in Dunedin. Both weather and park size will help him quite a bit.

There was a time when Steven Matz was spoken of in the same breath as Jacob deGrom and Noah Syndergaard and not just because they shared a rotation in New York. He came up in 2015 and pitched well, including a solid start in the World Series and was very good in 2016. But then injuries hit in 2017 and in 2018 and 2019, he settled into more of a solid pitcher than a difference maker. Last season was just a mess for him. He struck out more hitters than ever, but gave up an insane 14 home runs in 30.2 innings. Through two starts this year with the Blue Jays, he looks like his old self. His two-seamer and changeup got knocked around last year. This year, he’s allowed four hits on those two pitches and struck out 12 in 42 plate appearances ending on them. He has a curve and a slider, but those two main pitches are what the Royals need to watch out for. It’s very basic, but it gets the job done when those pitches are working.

Mike Minor has had a couple interesting starts. In his first, the raw numbers don’t look great, but he did get through six and kept the Royals enough in the game that they could come back. In the second, he only gave up the one run but just labored so much that he could only make it through four, which caused the Royals to play bullpen roulette a few too many times in a game they ultimately won. Minor has generally fared well against the Blue Jays in his career. He last faced them in 2019 and went eight shutout inning with nine strikeouts in a win.

I remember when the Tigers brought up Robbie Ray in 2014 and he honestly looked like not much to me. The 8.16 ERA probably helped solidify that opinion, but still, it’s true. He was included in the deal that sent Didi Gregorius to the Yankees and Shane Greene to Detroit, so he had an opportunity in Arizona to shine and he really did. His velocity jumped in 2015 and the strikeouts followed in 2016. He doesn’t have very good control, but he can really get swings and misses. Last year was rough for him, and while he was better in Toronto after they acquired him, he still wasn’t exactly good. They kept him around for a relatively cheap price on a one-year deal in the hopes he could rebound. He’s only made one start so far, but his velocity did bounce back from last year in it, but his curve didn’t get as many whiffs as I think we’ve grown accustomed to. In spite of looking the part, Ray isn’t really a workhorse. He’s not someone you want the order to see a third time as he’s allowed a .904 OPS the third time through in his career. That even jumped to 1.338 last season. The Royals have seen him just once and he faced six hitters in the final game of the 2017 season. Only one is still with the team, Whit Merrifield.

Brady Singer was better in his last start against the Angels. I wrote on Inside the Crown that he filled up the strike zone a little too much, but all in all, the stuff was crisp. He just was pitching too much in the middle of the zone and because of it had just seven swings and misses all game. He needs to attack the top of the zone and get the Blue Jays hitters out of their comfort zones. The Blue Jays, like most teams, struggle with the hard stuff at the top of the zone. They aren’t too lefty heavy, so this might not be a big changeup game for Singer, but against the lefties they do have, he might do well to bust it out.

Hyun-Jin Ryu has very quietly been one of the best pitchers in baseball when he’s on the mound since the start of the 2018 season. He’s made 59 starts in that time and has gone 351 innings with a 2.28 ERA and 343 strikeouts to just 58 walks. He’s only allowed 303 hits and 34 home runs in that time. Basically he does everything well. He’s frustrating because he doesn’t throw hard. His fastball tops out at about 92. But his pitches just move. He leads with either his cutter or changeup, throwing them about equally and both are just hard to pick up with whiff rates around 30 percent. He mixes in that four-seamer occasionally and a curve as well, but nothing is straight and nothing is easy to hit. If you want to pinpoint a weakness, it’s that for a true ace, he just doesn’t get deep into games, averaging fewer than six innings per start last season. He’s maybe a bit easier to hit against righties, but this is going to be a tough go for the Royals offense.

Danny Duffy has started the 2021 season about as well as anyone could hope, throwing 12 innings in his first two starts and giving up just one run and picking up two wins. He’s striking hitters out, limiting walks and looking generally really, really good. In his last start, he even threw a pitch at 97.3 miles per hour, so he’s definitely feeling it right now. He’s actually been pretty good against the Blue Jays over the last few years he’s faced them with five pretty good starts dating back to 2015.

I kind of liked the matchup with the Angels for the Royals, and that’s a big reason why I thought they might win the series (and they did). I’m a little more concerned about this one with the Royals pitching staff putting up solid numbers in general but looking shaky doing it. I think I’m going to predict a split in this series, but I’m very close to thinking the Blue Jays take three of four.

Toronto Blue Jays Series Preview: Don’t forget the Royals have won the ALCS twice against them