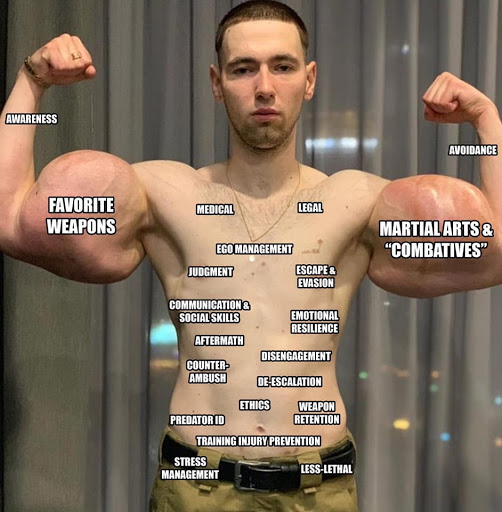 A couple things have crossed my path recently that got me thinking about the importance of emotional control to personal protection, and how little this topic is discussed, let alone trained.
The first being this brilliant meme 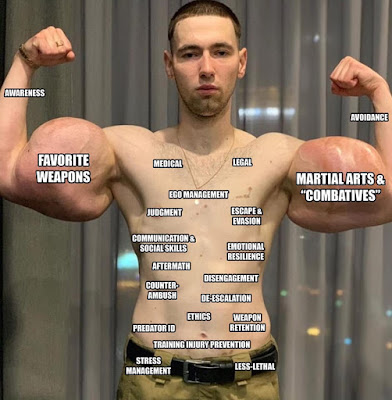 The meme is great because martial arts & combatives is written on the bicep (all the attention and effort is put there) and all the other operational disciplines that make self defense actually viable are listed on the rest of his puny body (given no attention). - Ego Management and Emotional Resilience being a couple of those things.
Another thing I saw recently that encouraged me to think about emotions was the news article I used for Topical Tuesday the other week 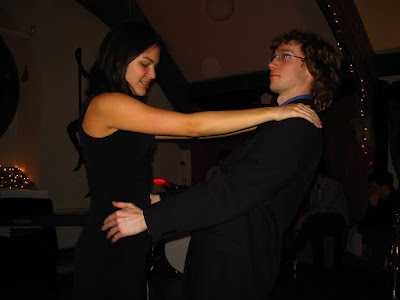 Click HERE to read the article
The article describes a school that has a rule where student’s can’t say no to anyone that asks them to dance.
I’ll repeat a school that says you can’t say no. But no means no, ha ha ha not at this school Missy - happy International Women’s Day. 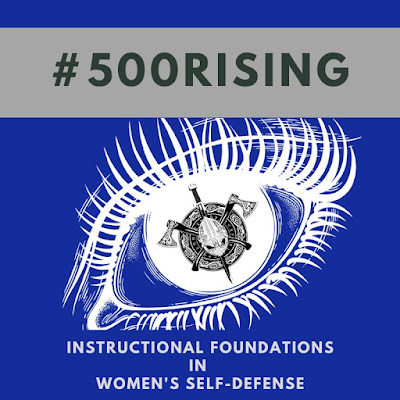 
And lastly I wanted to talk about emotional control because this video
There was some sort of beef between a TKD school and a gym.

Just like the meme emotional control is not given nearly the attention it needs in regard to personal protection training.

A point we hammer at Violence Dynamics is no de-escalation training you have is going to work until you de-escalate yourself first.  This is way easier said than done.  To make this happen you have to be able to recognize the signs / symptoms of adrenalization while you are experiencing them.  Acknowledge that you are being emotional, and actively choose to control your emotions. 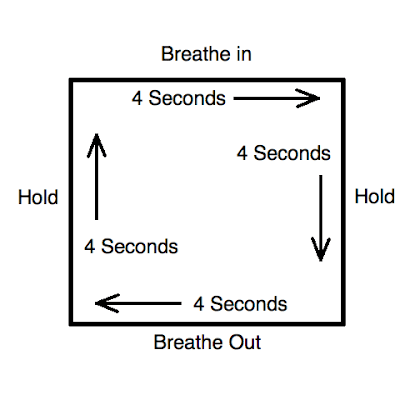 Breath - Do something that affects the world - Sorry I got upset there - how can we find a solution.  Human level win find the source - Status, Membership, Territory, Protocol

Again way easier said than done!  And there are other factors which make this more difficult.  Randy makes the brilliant point that any drug someone would take for recreation has to mimic brain chemicals otherwise it would just be poison.  Why do people do drugs?  Despite what your DARE instructor told you in 5th grade people do drugs because drugs are awesome!!!!
They make you feel great, for awhile at least.    Drugs feel good, so even if you recognize the symptoms of adrenalization you may ignore them or actively choose to lean into them because it feels good.  One of the basic principles of verbal Judo is that if it feels good to say it you probably shouldn’t say it.
Emotions are just synapses firings and chemicals being released into the blood stream.  We label them by how they make us feel.  The chemicals are the same, the cause of the chemical release and the resulting feeling may be different based on the circumstance.  Keeping with the drug analogy not unlike a bad trip.

Angry feels better than scared or sad but not as good as happy.
Angry can be useful.  However, be cautious.

Do you know anyone that can't be happy unless they are upset about something?

I do can't get coke to feel good, but my dealer is out so I settle for crack.  Crack is easy to get, and makes me feel other than sad...now I'm addicted to crack.

Angry feels better than scared or sad but not as good as happy.
I can't get happy so I settle for angry...now I'm angry all the time. 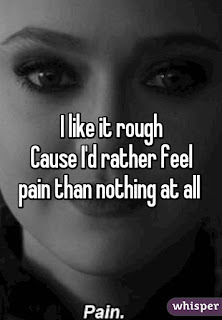 Just like drugs feel good for awhile but may have drastic consequences… Calling your boss a spineless cock sucker might feel great, until you can’t pay your mortgage because you lost your job.


Angry is more useful than afraid.  However, being able to recognize any emotion during conflict, and mitigate it so that you can use strategy is superior to simple rage.

This affects your physical skills too.  Just like the TKD video, or the chapter from Angry White Pajamas - even very highly trained martial artists, the peak of their respective arts when in emotionally charged interpersonal physical violence don’t use any of that skill, they resort to big looping hey-makers, and half assed tackles.

Some of you watching this may be calling bullshit.  That is fine I’d love to discuss it with you in the comments.

In my life experience I have seen this a lot and...I recently conducted an experiment.
An experiment? 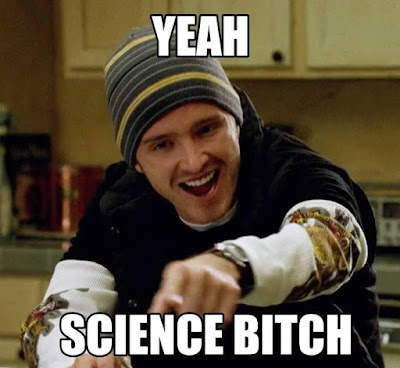 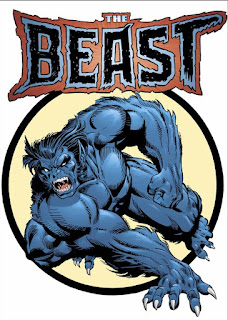 Step one of the scientific method - The Question.
Could I purposefully reduce someone’s physical skills by inducing an emotional response?

Step two - Hypothesis (make an educated guess to your question)
Yeah, I bet I could.

Step three - The Experiment (test your hypothesis)
I was running a range.  Part of the range was dry fire drills, one drill in particular requires the student to balance a bullet point down behind their front sight bring the weapon up from just having cleared the holster to acquire a sight picture, trigger press, and pin return the weapon to starting position.  If the bullet falls you have to air squat to pick it up (punishment).
After a while, when the shooters were doing this exercise well consistently (no squats for awhile) I would announce to all - Hey nice job, everyone is looking good!  I need 3 more perfect reps from (insert subject’s name here) lets say John, then we can go on to the next exercise.

John had just done 50 reps perfectly with machine like precision.

100% of the time eliciting an emotional response resulted in the bullet being dropped on the next rep.

What can we learn from this?
Prepare for the worst, hope for the best.  If emotional control is difficult, and lack of emotional control in a physical confrontation can reduce your responses to very simple gross motor actions, then it is in your best interest to be the best fucking caveman in the room 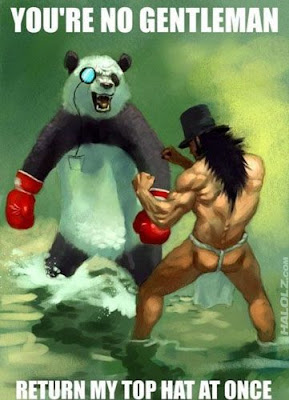 How do you do that? Examples include getting your heart rate up above 130 beats per minute and attempt the skills in your tool box.  Whatever you can do reasonably well in these circumstances should receive priority training so that you can do them very well in similar circumstances.

If you have a caveman foundation, any time you can control your emotions and use more of your skills your probability of success increases.

Ultimately, the highest level is being to control your emotions so well, that you can manipulate the threat's emotions. Help to calm them down so that physical conflict can be avoided. If that is not possible, ramping them up so that they lose much of their skill, while you remain "cold" with greater cognitive processing ability. 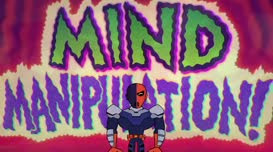 How to practice emotional control.
At Violence Dynamics often we are asked to provide role playing exercises for this.  No actor is nuanced enough to provide the right stimulus and then read your de-escalation strategies and react accordingly.  Mostly because the actor knows it is a game.

So practice - all the fucking time!  Every human interaction you have.  Look for the symptoms of emotion in yourself.  Do some form of active physical emotional control.  Find the source / path back to a human level win - Status - Membership - Territory - Protocol

If you aren’t comfortable experimenting on the people in your life, try visualization.
When I read the article about the middle school dance, I got mad at a pretend principle that made my theoretical daughter dance with some creepo Jr. High kid.  My imagination elicited an emotional response.  We can practice managing artificially induced emotions.  Inhale - Hold - Exhale - Hold how could I handle this situation without getting my daughter kicked out of school or me going to jail?  - Status - Membership - Territory - Protocol
The more you experience this, the easier it is to control your emotions.