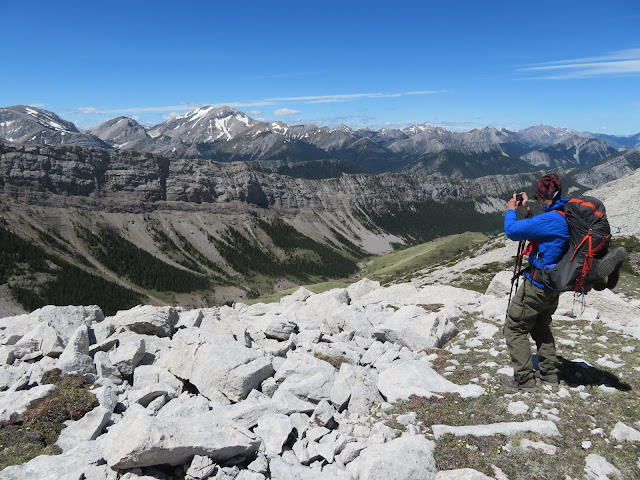 
With a looming fire season heavy on my mind, Gordon Whirry and I set out on an early-season backpack trip on the Front/Bob Marshall area west of Choteau.

We were also taking advantage of a dramatic temperature drop, with temperatures falling from the mid-90s to the 60s and 70s.

This was a 21-miles loop that gained and lost nearly 6,000 feet over two days.  We climbed the unnamed high-point of a ridge (8,237 feet) between Rierdon/Slim gulches and Ear Mountain, hiked along a 2-mile stretch of Deep Creek, climbed out and descended along the South Fork Teton-Blacktail National Scenic Recreation Trail to the South Fork Road.

I thought I had seen nearly every part of the Rocky Mountain Front, but somehow I had missed that 2-mile trail that snakes high above the Deep Creek Canyon, comparable to the vast canyons in Yellowstone Park, and full of waterfalls.

We began this trip by returning to familiar ground --- Rierdon Gulch off the South Fork Road.  At a low saddle just north of the Rierdon-Slim divide we gained the ridge, walking up and down small peaks along the way with dramatic alpine views in all directions ---- Ear Mountain to the east, Rocky and Old Baldy peaks to the west, the Scapegoat country to the south and the Lockhart-Wright-Patrick Gass country to the north.  It was so clear that we could see the Sweetgrass Hills, the Highwoods, Little and Big Belts, the buttes to the east on the Great Plains.

Given the unseasonably dry and hot conditions on the Plains I was surprised at how much snow there was, particularly on north-facing slopes, and in draws.  There seemed to be water coming from every direction, feeding spectacular displays of wildflowers.

We set up camp at the Green Gulch trailhead, but wished we had waited for Sheep Creek, only a half-mile beyond and even more scenic and closer to water.

We saw grizzly sign, but no grizzlies and were surprised at how little animal sign we saw most of the trip.

Our greatest challenges ---- aside from being 73-year-olds --- were climbing over many downed trees and snow.  We found the Deep Creek-South Fork Divide clogged with snow, running steeply down the drainage for more than 500 feet. We finally gave up trying to post-hole in the snow that covered the trail by dropping to the creek bottom where there was room to descend unimpeded, but eventually having to cross the snow when the trail moved to the east side of the creek.

We had this remarkable area all to ourselves and it was clear to us that we were the first to go down the South Fork portion of the trail.

I had hiked in the Deep Creek country about 33 years ago, and don"t know why I hadn't returned.  I thought I had hiked the South Fork Teton, but I didn't remember anything of it.

Not only is it empty but for hunting season and some summer dudes, but it may be some of the most scenic and wild part of the Front.

Luckily, much of this country was included in the 2013 Rocky Mountain Front Heritage Act that added it to the Bob Marshall Wilderness, but spots like Rierdon Gulch to the Slim Gulch divide and the South Fork Teton from the Deep Creek divide to the road, were not.

I hope I can get back there in this lifetime. 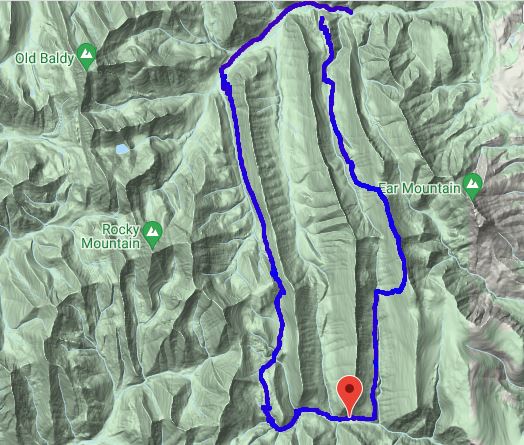