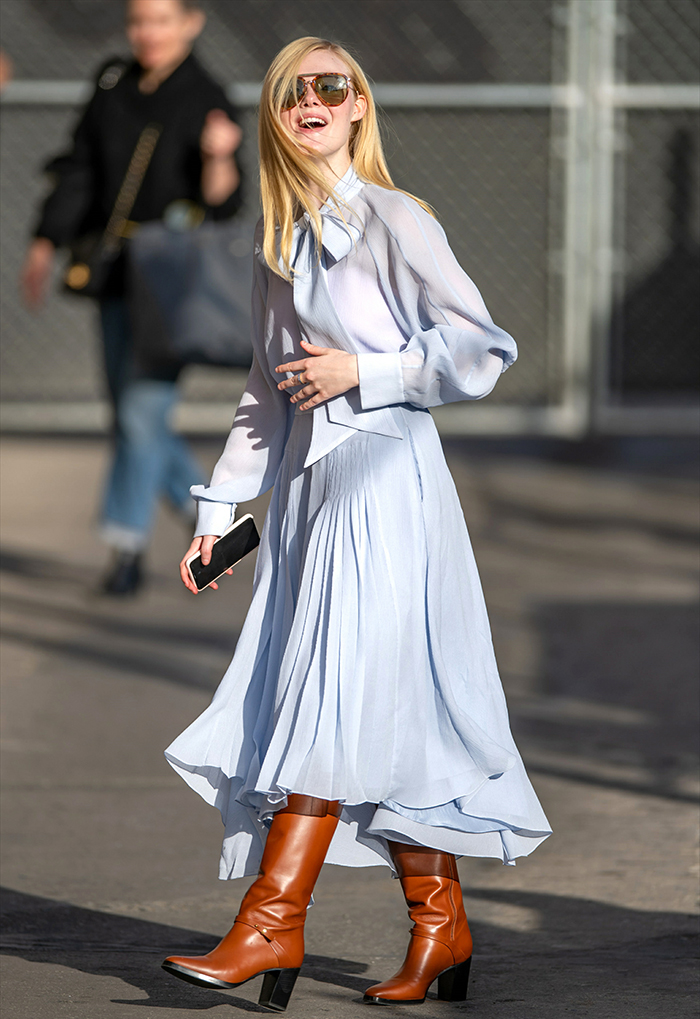 Elle Fanning has a lot on her plate right now, with three movies and a TV series due out in 2020.

Currently, she’s on a promo run for her romantic drama, All the Bright Places, which was released by Netflix on February 28. She stars alongside Justice Smith in the teen romantic drama film, which is based on the novel of the same name by Niven that you can buy on Amazon. 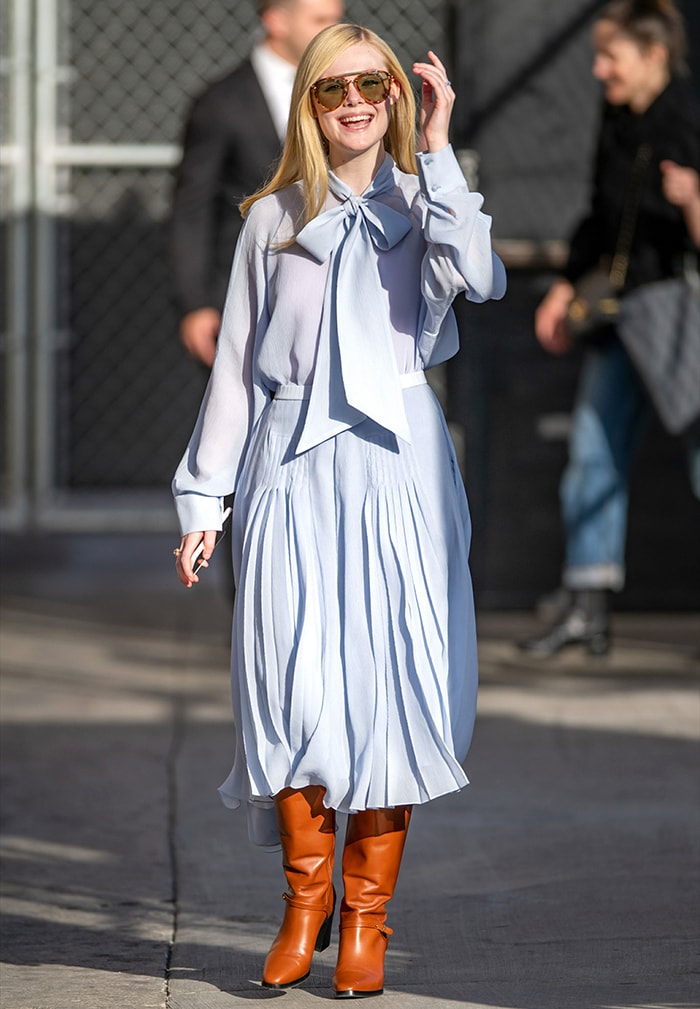 Elle Fanning arriving at the El Capitan Entertainment Center in Los Angeles for an appearance on Jimmy Kimmel Live! on March 4, 2020

On Wednesday, Elle was spotted arriving at the El Capitan Entertainment Center ahead of her appearance on Jimmy Kimmel Live.

Wearing a baby blue outfit, Elle was all smiles as she waved to the photographers outside the studio. She looked pretty in her ‘70s–inspired Rochas Pre-Fall 2020 blouse, which features a silk-chiffon pussy-bow detail and bishop sleeves.

The wealthy American actress tucked her trendy top into a pleated midi skirt, also from the same collection.

Dakota Fanning’s younger sister teamed her pastel blue number with a pair of chestnut-colored Gucci boots, which complemented her Gucci tortoise-framed sunglasses. Do you know how to spot the difference between fake and real Gucci Shoes? 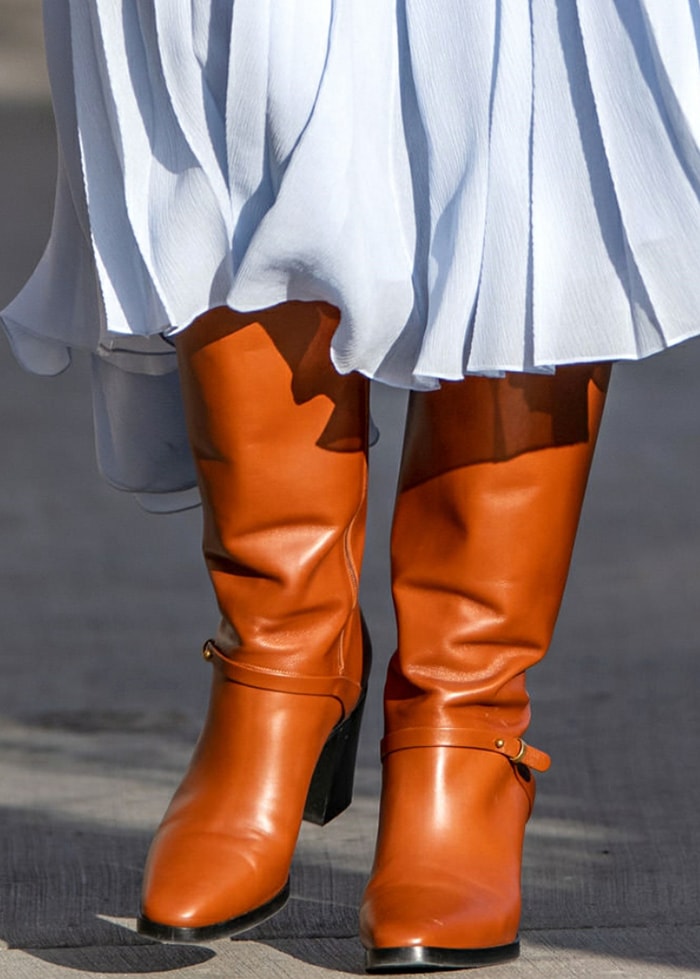 Her blonde locks were styled straight with a side parting, while her face was simply made-up with pink blush, lipstick, and dark eyeliner. 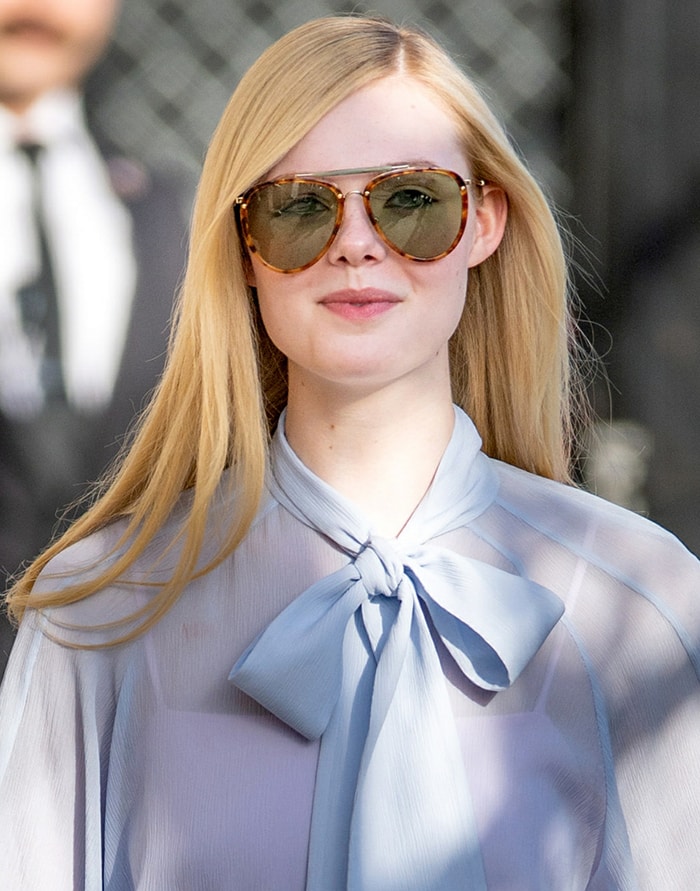 Elle Fanning wears her blonde hair straight with a side parting

Aside from her romantic drama, which she co-produced, the 21-year-old actress also talked about the karaoke party she had for her 21st birthday.

She admitted she threw up in an Uber on the way home after having one too many drinks. When Jimmy Kimmel asked her about her go-to drink, she said its vodka martini, extra dirty.

The Maleficent actress also divulged a movie project, The Nightingale, with her sister Dakota Fanning. It’s the first time the siblings are appearing in the same film since 2001’s I Am Sam.

She said: “We’re about to do a film together. Starting in a month.” “We’re playing sisters in the movie,” she added.

Elle also stars in the British-American drama, The Roads Not Taken, which premiered at the Berlin International Film Festival last month and will be released in theaters on Friday, March 13. It follows a day in the life of dementia-stricken Leo (played by Javier Bardem) and his loving daughter Molly (played by Elle).

She also has an upcoming drama web TV series, The Great, which is set to premiere on May 15 on Hulu. Elle, who plays the lead character, Catherine the Great, also executive produces the show.

The post Elle Fanning Pukes in Uber & Promotes Netflix Movie All The Bright Places appeared first on Your Next Shoes.