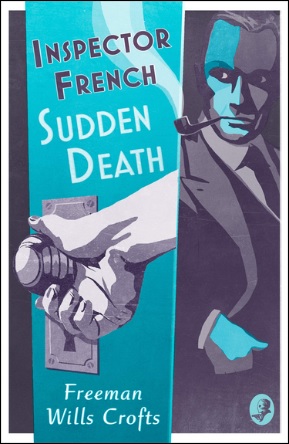 This year, the Collins Crime Club imprint, of HarperCollins, reissued six long out-of-print novels by Freeman Wills Crofts in two batches of three with the second batch comprising of Mystery on Southampton Water (1934), Crime at Guildford (1935) and the novel that has been on my wishlist for ages, Sudden Death (1932) – which is Crofts' take on my beloved locked room mystery. Inspector Joseph French has build a reputation on being "invariably sceptical of alibis" and breaking them down with painstaking work and dogged determination. Sudden Deathdemonstrated French is as adept at tearing down locked rooms as he is at disassembling faked alibis with no less than two impossible murders coming his way! 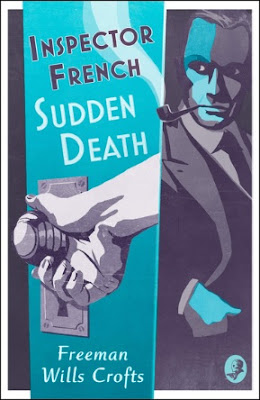 Sudden Death also showed Crofts could be more, if he wanted to be, than a plot-technician with the story's viewpoint alternating between French and a young woman, Anne Day.
Anne had spent most of her early life in an old Gloucester parsonage attending her reclusive, scholarly father, Reverend Latimer Day, but when he passed away, she was left homeless with "an income of barely thirty pounds a year" – only lucky enough to find a job as a companion to an elderly lady. But when she died, a then 28-year-old Anne was forced back to the registry offices of London with no special qualifications while "shoes and gloves, and latterly even food and lodging" becoming "more and more hideously insistent problems." One day, Anne is offered a position in the home of Severus Grinsmead to help his sick, semi-invalid wife, Sybil, run the household. A well paid position with a very generous advance. Naturally, not everything is as rosy as it seems.
Surprisingly, coming from Crofts, there's a hint of The Had-I-But-Known School in the opening chapter with the line "had she known all that awaited her at Ashbridge," she "might well have drawn back in dismay" from "the agonies of fear and horror and suspense which she was fated to endure with the Grinsmeads."
Sybil is a sickly, cold and deeply suspicious woman and it takes Anne some time to gain her confidence, but she didn't need it to understand that the relationship between husband-and-wife resembles that of an armed truce between two hostile nations. Sybil is aware her husband is having an affair with the local grass widow, Irene Holt-Lancing, which convinced her that they want her dead and biding their time for the right moment – ensuring Anne there will be an accident or "it may look like suicide." Puzzling, Anne becomes privy of evidence and information both confirming and contradicting Sybil's deadly fears. I think False Impressions would have been a better title than Sudden Death, because it fits so many aspects of the plot and story.
Nevertheless, not everything is laden with impending doom or suspicion. Anne comes to find out that the governess to the Grinsmead children, Edith Cheame, shares a similar life story to her own and that Severus Grinsmead's mother is not quite as stiff or censorious as Sybil made her out to be. She also strikes up a friendship with the children and gets on with the chauffeur/gardener like a house on fire. So she could almost forget her employers unhappy marriage, infidelity and suspicion, but that all changes one morning when Anne went to her bedroom to bring her tea. Anne's knocking remained unanswered by the invitational click of the electric, push-button operated bolt. She then noticed that there was "an odd smell of gas" in the corridor and quickly realized "gas was simply pouring out" of the keyhole of Sybil's room. A hammer and chisel were needed to demolish the lock and open the solid door, but help had arrived too late. Inspector Kendal, of the local police, goes over the room with a fine tooth comb, but finds "an enclosed affair" that "you couldn't very well temper with." So concludes it was a suicide and that's the verdict at the inquest.
There are, however, some minor details bothering Kendal and Scotland Yard assigned Inspector Joseph French to the case to go over all the details again and give them a second opinion. I suppose this is where people who dislike Crofts will very likely stop liking Sudden Death. 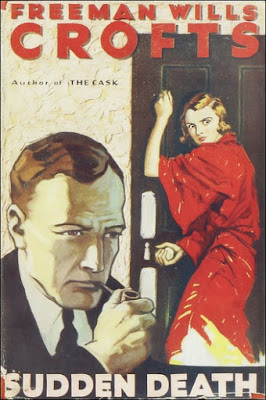 Crofts tried to write a novel of character (singular) with Anne Day as in the lead during the first third of the story, but French's thorough and painstaking investigation of the locked room problem proved his heart lay with the nuts and bolts of the plot – coming up with a number of ways to gas someone behind a locked door. My fellow impossible crime enthusiast and Crofts aficionado, "JJ” of The Invisible Event, suggests in his review that "dazzling array of options" can be counted as "a Locked Room Lecture that predates that of The Hollow Man (1935) by John Dickson Carr," but Crofts is "less showy" about it. For once, I've to agree with JJ. Crofts doesn't break the fourth wall to acknowledge the reader and it's not presented as a lecture, but it can be read as a proto-Locked Room Lecture. Something that will no doubt please anyone with a special affinity for impossible crime fiction.
Another thing that occurred to me while reading is Crofts might have created the most convincing and believable of all so-called fallible detectives. Anthony Berkeley usually made an ass out of Roger Sheringham (e.g. Jumping Jenny, 1934) and Ellery Queen too angsty (e.g. Ten Days' Wonder, 1948), but Crofts created a competent, intelligent and imaginative Scotland Yard inspector, which are admirable qualities, but they come without cast-iron guarantees of success attached to them. French is not an enigmatic detective who can deduce the truth from a bowl of daffodils or the curious incident of the dog in the nighttime, but he does use the Sherlockian inspired method of rejecting the impossible and "see what is left." A thorough, painstaking process of elimination and fine-tuning of possibilities that has many dead ends and constant second guessing whether, or not, he was building his theories on "an foundation of sand." And it was a nice touch by making French sink his teeth in the case with a future chief inspectorship in the back of his mind.
You can, however, argue French came up a little short on this occasion with only a second death preventing a terrible mistake when one of his main suspects committed suicide in a room with all the doors and windows locked, or fastened, on the inside – forcing him to go back to the drawing board and start over again. So how good is Sudden Death as a locked room mystery novel with its two murders-disguised-as-suicides in completely locked rooms? Well, not too badly!
The solution to Sybil's murder in her locked bedroom is, to my knowledge, original and don't believe it has been used since, but, as you can probably guess, the trick is a technical, semi-mechanical nature. Not everyone is going to like it. The solution to the second impossibility is an old dodge of the locked room story, but it was put to good use and provided the story with a last clue to the murderer's identity. So, on balance, Sudden Death is not a classic of its kind, but as a good and solid take on the impossible crime novel. And not one that should be solely judged on the content of its locked rooms.
Crofts was one of the often maligned, so-called humdrum writers who were more interested in the how than the who-and why, which means that their murderers tend to be easily spotted. I wrongly assumed that the case here, but the murderer and motive were cleverly hidden with "the closed room as a blind." Crofts knew what makes a sound plot tick and that makes it the more baffling he left a small aspect of the first locked room murder unexplained. I can accept that from a mystery writer who's more interested in character or storytelling or a second-stringer, but the Chief Engineer of Crime should have known better and it seriously detracted from, what would otherwise have been, the best Inspector French novel to date. Now I have to reluctantly place it slightly below The Sea Mystery (1928), Mystery in the Channel (1931) and The Hog's Back Mystery (1933).
Omission not withstanding, Sudden Death is a fine piece of old-fashioned, Golden Age craftsmanship and it was fun to see the master of the unbreakable alibi apply himself to the locked room mystery while dabbling a little in domestic suspense and HIBK. Sudden Death shows Crofts is as deserving of being revived as he was undeserving of his old reputation as the writer who cured insomnia. Now all I want is a reprint of Crofts' second locked room novel, The End of Andrew Harrison (1938), but until then, my next stop in the series is probably going to be Sir John Magill's Last Journey (1930). So stay tuned!
Source: moonlight detective