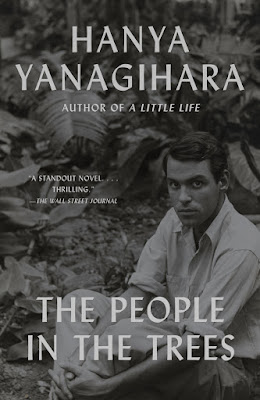 In September of last year i read A Little Life by Hanya Yanagihara.

Like almost all readers, i was struck by power of this work that many were proclaiming to be “ The Great American Gay Novel”.

Here is part of my initial reaction to A Little Life

The novel focuses on four men who met while attending a college in  Massachusetts.  They move to New York City to seek their future. In The group are Malcolm, an architectural student from a very wealthy biracial family.  JB is a painter of Hatian descent hoping to establish himself in the art world, and Willem, an aspiring actor.  The central figure in A Little Life is Jude, who grows to become one of highest regarded attorneys in the City.  Like Willem, he is an orphan. Jude and Willem share an apartment after graduation.   Jude’s early life history and ethnic background are at first veiled in shadows.  Jude  has serious health issues.  In the gradually evolving account of the life of Jude before he reached college a horribly painful long drawn out we learn of sixteen  years of sexual abuse at the hands of the Christian Brothers who run the orphanage.

At age thirty a Professor who was his mentor, Harold, in law school, along with his wife, adopts Jude.  As close as he is to his three friends, June cannot begin to tell his friends sbout his years of abuse.

The novel goes into great depth treating the evolving relationships of the four friends. Jude’s health gets worse, he has been cutting himself, mostly on his legs, for years.  We see how Jude struggles to cope with the impact of years of abuse on his life.

A Little Life is a work of great depth.  It may become an LGTBQ classic.  It is not an easy to read feel good book.  I highly endorse this work. It deserves all the praise it has gotten.

I am not going to summerize the intriguing plot.  (If you need this Wikepedia has a decent summery). It is structured as if it was the written in prison  memoirs of a ground breaking Nobel Prize winning  scientist presented in an edited version  with extensive footnoted fashion by a former colleague.

Much of fhe plot action takes place on a nearly unknown tropical island in the pacific inhabited by a unique tribe with very little contact with the modern world.  The lead character was fresh out of medical School and somehow was selected to Go along as a Research assistant.  We learn a lot about the culture and lives of the people on the island.  They have very open sexual practices including ritual sodomizing of young Boys as they hit puberity by the tribal Elders.  Slowly it seems some of them live hundreds of years.  The consequences of this discovery Will destroy their culture and totally degrade The island’s ecology.

Gradually we lesrn more about lead character.  His Life takes a very strange twist.  Disturbing to say The least.

Like A Little Life, there is an extensive treatment of child molestation.

People in The Trees was a great read.

Hanya K Yanagihara (born September 20, 1974) is an American novelist, editor, and travel writer. She grew up in Hawaii.