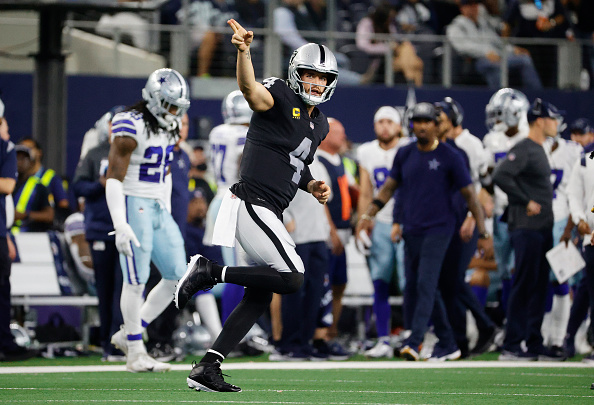 Las Vegas Raiders Get A Turkey Leg Up On The Dallas Cowboys, 36-33, In Overtime 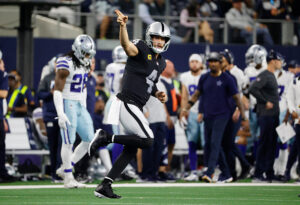 “This game is Katy Perry: equal parts hot and cold,” said a neighboring relative, watching the marquee game between the Raiders and Cowboys on Thanksgiving day.

The Las Vegas Raiders and Dallas Cowboys faced off on Thanksgiving to ruin appetites across the nation: both teams sloppily finishing the evening with a 36-33 result in overtime — favoring the Raiders for the win.

All season, the Raiders’ formula to winning has been letting quarterback Derek Carr sling it, winning all games where he throws for over 300 yards (5-0) and losing all games when throwing under the mark (0-5).

The Raiders won the game with Carr’s signature passing performance, throwing for 373 yards, along with Dallas’ string of follies to cost the home team at AT&T heavy yardage with penalties.

Dallas cornerback Anthony Brown had two costly defensive interference calls on a Raiders touchdown drive to go up 14-6 by the end of the first quarter, capped off by Josh Jacobs’ touchdown run.

As much as Dallas tried to respond, the porous offensive line and Cowboys penalties kept the league’s top offense in the Lone Star state at bay. In the second, Tony Pollard’s 32-yard run to set the team up for a tying score got called back on a hold by Tyler Biadasz — encompassing the mistake-ridden night for the Cowboys. One good play would result in one bad penalty, with Dallas committing more offenses.

Down 24-13 in the third quarter, Cowboys running back Tony Pollard answered on behalf of his team with a 100-yard kick return TD. Coach Mike McCarthy decided to go for the two-point conversion but failed. 24-19.

With three minutes left in the fourth quarter, down eight points, Dak Prescott hit Dalton Schultz for a 32-yard passing touchdown on a pass so tasty it rivaled grandma’s turkey. The cranberry sauce on top was a successful two-point conversion from Dak to Schultz, again, to tie things up, 30-30.

Las Vegas responded with a field goal, and Dallas tied the game with less than a minute left, 33-33, to send things into overtime: the sixth game all-time on the Thanksgiving slate to go to added time.

After exchanging possessions, the Raiders marched down the field, courtesy of some late penalties by the Cowboys, to set Las Vegas placekicker Daniel Carlson for a 29-yard game-winning field goal.

The Raiders improved to a 6-5 record, improving the team’s record under interim head coach Rich Bisaccia to 3-3. Dallas fell to 7-4 and extended their losing streak to two games.

The post Las Vegas Raiders Get A Turkey Leg Up On The Dallas Cowboys, 36-33, In Overtime appeared first on OutKick.

Las Vegas Raiders Get A Turkey Leg Up On The Dallas Cowboys, 36-33, In Overtime