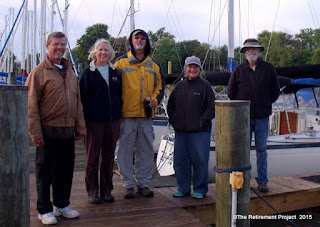 Throwback Thursday - The "Why we do this" Series

If asked what the best thing about our nearly six years of cruising was, I would immediately respond, "The Cruising Community." I admit that when we dreamed of doing this, that would not have even hit my radar, but in these years of cruising we have met more life-long friends than we did in the 57 years before. This post captures the very best of it all. And here are photos of the ones who made it possible:

Posted by TJ
Wednesday October 21, 2015
Halloween was a big deal in the neighborhood; a suburban enclave where our "baby boom" generation was born and lived its early years. Hundreds of kids would go door to door in costume, collecting enough candy to keep a sugar buzz going clean through to the New Year. Houses were in costume as well, some modestly with just a pumpkin on the doorstep and maybe a sheet thrown over small shrub as a welcoming "ghost". Others were more elaborate; family members in full scary makeup and costume, garages and lower levels turned into haunted houses, off-key dirges playing in the background, and lighting to fit the intended theater.

Our house fell somewhere in the middle, but still managed to be the talk of the neighborhood. Each year we would find the biggest pumpkin we could, hollow it out, carve a scary face, and set it in the window by the door. Hidden inside the pumpkin was a dim light to set the scary face aglow, and a speaker. Hidden in the darkened room with microphone in hand was my Dad, the voice of the Talking Pumpkin.

It was a pretty innovative use of technology for the early 1960s, which turned into a kind of neighborhood staple. As the years went by people would drive in to introduce their kids to the Talking Pumpkin, little ones giggling but also looking around, not exactly sure what to make of the mysterious voice.  It was all good fun.

On Sunday, October 18th, 2015, late in the afternoon, the Talking Pumpkin fell silent. The news came via the tiny speaker held in my hand, the voice of Brother Youngest telling me that our Father had passed away suddenly, fallen by a massive heart attack.

Kintala was anchored at the edge of the grid, waiting out some weather. It took more than an hour of broken communications and dropped calls to get the news to Daughters Three. The logistics of finding a safe place to dock the boat for several weeks, then finding our way to PA as quickly as possible, looked to be nightmarish.

Two years ago, on our first trip down the ICW, the Beast sprung a massive fuel leak forcing us to spend a month in Oriental, NC. We were there over Thanksgiving, our first away from family. Chris and Sherry were also away from family, working to get their own cruising plans together. We shared Thanksgiving dinner at a local eatery that caters to the cruising tribe, and they became some of the earliest of our cruising friends. As it turns out they bought a slip in Oriental but their boat is currently on the hard. Seeing us heading south they had gotten in touch with us once again, enticing us to stop in Oriental with the offer of a free slip and a chance to catch up.

Oriental was a day's sail away when we got the news, and they offered us the slip for as long as we needed. We arrived after a glorious day of sailing to be met by Friends Mizzy and Brian. After a couple of days of buddy boating they had beaten us to Oriental by a few hours and so were on hand to help ease Kintala safely onto the dock. Over dinner that night their gentle conversation and obvious care helped ease our hearts as well.

A week or so ago Friends Nancy and David cut their Seaward 32 loose from Oak Harbor and pointed the bow south, leaving their car behind as they normally do. A car free for us to use if they could work out a way to get it to us, or us to it. So they did. Currently in Hampton and having already made plans to rent a car for a day to do some chores, they left at O-So-Dark-Thirty the next morning and drove to Oriental. After a quick coffee with the Gang from Oak Harbor (Mizzy, Brian, Nancy, David, and us) they loaded us aboard the rental and headed north. At about that same time other members of the Gang from Oak Harbor, Wayne and Sue, themselves just two days away from dropping the lines and sailing off, got in their car and headed south.

The two vehicles met at a truck stop somewhere south of Richmond. Deb and I were handed off for the next leg of this Pony Express of Kindness. By late afternoon we were back at Oak Harbor loading up. Barely 36 hours after picking up Kintala's hook in the remote waters of the Pungo River and unsure of how we were going to get where we needed to be, we were pulling into the driveway of family with all transportation worries behind us.

There are no words big enough or deep enough to describe people who step up like that, utterly careless of their own plans and time; not expecting, indeed rejecting, any idea of getting something in return. They had friends in need and that was all that mattered.

If a person be very lucky in life they will accrue debts like these. Debts that can never be repaid.

Debts that can never be forgotten.

We will be away from the boat for a few weeks. Kintala will sit quietly, as will this blog. Fathers die. Sons and Daughters lay them to rest, struggling with a world that is somehow, fundamentally different than it was. Then we look to our own sons and daughters.

And the journey goes on.

Throwback Thursday - The "Why we do this" Series