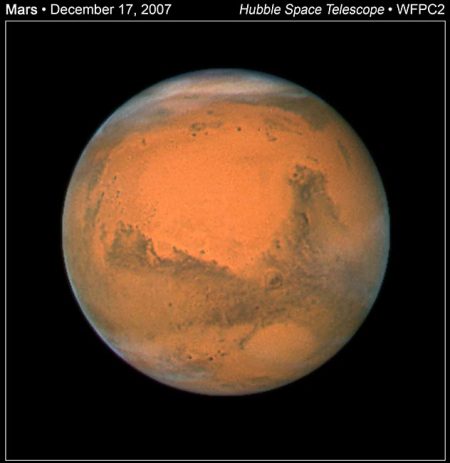 Is NASA’s Chief Administrator Right? Are We Very Close to Finding Life Elsewhere in the Solar System?

February 24, 2019 – Was it a spur of the moment comment earlier in the month, that Jim Bridenstine, not a scientist, but rather an ex-member of the U.S. Congress, stated among many things that the agency was very close to finding alien life on Mars?

In a CNBC interview on February 14th at the World Agricultural Expo, he covered many topics but near the end of the video he points to three things that the Agency has learned about Mars from in orbit and surface observations.  Bridenstine was referring to the following:

Didn’t the Viking Landers Discover Evidence for Life on Mars?

Since the two Viking spacecraft touched down on Mars back in 1976 and began taking samples of the soil, many scientists have been convinced that the experiments done on board pointed strongly to evidence of existing life. At the time NASA played down the results giving equal weight to exotic chemistry explanations for the observed spikes in gases associated with life.

When Spirit and Opportunity arrived on Mars in 2004, 28 years later, the NASA science team chose not to include experiments to repeat those done by Viking. Instead, the rovers were tasked with looking for past physical evidence of liquid water which they found in abundance. Eight years later when Curiosity landed on Mars and began to explore an entirely different area of the planet, once again NASA chose not to include the Viking experiment.

But now it appears that NASA is beginning to recognize that maybe Viking got it right. Bridenstine in the interview talked about the many NASA discoveries that have been made since Viking. Today we know that Mars in its past had a molten core, and may still have to a lesser extent; that the planet was protected by a magnetic field which shielded it from cosmic radiation just as ours does here on Earth; that Mars had a thick atmosphere earlier in its history; and that much of the Northern Hemisphere at one time was covered by an ocean. It would seem that with such evidence from the past that Mars was likely to be habitable. That doesn’t mean there was life on Mars. But when you start looking at the evidence from Mars in the present, it certainly indicates the likelihood of some form of microbial survivors are still there and probably hidden beneath the planet’s surface.

A deeper dive into Bridenstine’s three key points is worth doing.

In a June 2018 journal article appearing in Science, evidence from the Curiosity rover’s two instruments in the onboard sample analyzer (known as SAM) identified traces of 3-billion-year-old organics preserved in surface sediments. Curiosity found the organics in the sediments of what was once a lakebed at the bottom of Gale Crater. The presence of sulfur in the sediments suggests that the organics were protected from surface radiation and the presence of perchlorates.

The rover also provided measures of methane gas in the atmosphere over three Martian years. What the measuring showed is that levels of the gas varied seasonally hinting to a biological source. Some scientists have argued that an abiotic source native to Mars could explain what was being observed. The presence of methane on Mars, which on Earth breaks down in the atmosphere in a little over a decade, is intriguing. The constant replenishment of the gas in the Northern Hemisphere each mid-summer suggests that these gas eruptions cannot be coming from something ancient since the methane would be long gone by now. It has to be something in Mars’ present. In a February 2009 research paper on the subject, it states, “Living systems produce more than 90% of earth’s atmospheric methane, the balance is of geochemical origin. On Mars, methane could be a signature of either origin.” The amount of methane in observed plumes equals approximately 19,000 metric tons, comparable to the amount of methane released every year by hydrocarbon ocean seeps off the coast of Santa Barbara, California. In the latter case, the methane is coming from oil and natural gas pockets under the seabed. And those hydrocarbon deposits on Earth are very much evidence of the past life on our planet.

Radar evidence of a lake of standing water under the Martian south pole was a highlight story in 2018 and the subject of a journal article published in August in Science. Spotted first by the European Space Agency’s Mars Express, by one of the many orbiters circling the planet, the lake stretches some 20 kilometers (12 miles) across the pole and lies about 1.5 kilometers (just under a mile) beneath the ice cap. An explanation for the lake’s existence could be the way ice at the poles flows differently from what we observe here on Earth. It appears the ice is porous and less dense than Earth glaciers, which may contribute to liquid water finding its way to subsurface pockets where it pools. The search is on for other subglacial lakes which could resemble those found in Antarctica. These lakes could preserve life developed near the Martian surface earlier in the planet’s history, that has now found refuge below.

So Bridenstine, unleashed in the CNBC interview, has spilled the beans on a growing body of evidence garnered from studying Mars close up over the last several decades that has a consensus of NASA scientists convinced that Mars harbours life today. The implications of that discovery are enormous.

Is NASA’s Chief Administrator Right? Are We Very Close to Finding Life Elsewhere in the Solar System?