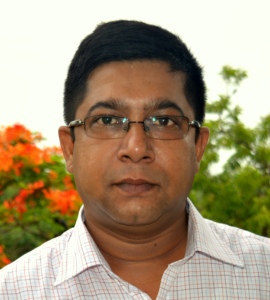 Suhrit Ghosh was born in 1976 in India. After the completion of his undergraduate education (Chemistry major) at the Presidency College (now University), Kolkata, he was admitted to the integrated PhD program (Chemical Science) at the Indian Institute of Science, Bangalore in 1997. He received his MS degree (Chemistry) in 2000 and continued for PhD until 2005 under the supervision of Professor S. Ramakrishnan. Then he moved to the group of Professor S. Thayumanavan at the University of Massachusetts, Amherst, USA, for postdoctoral studies (2005-2007). Subsequently he worked as an Alexander von Humboldt postdoctoral fellow (2007-2008) with Professor Frank Würthner at the University of Würzburg, Germany. In 2008 he joined the Indian Association for the Cultivation of Science (IACS), Kolkata, India, as an Assistant Professor where he currently holds the position of Professor and Chair of the School of Applied and Interdisciplinary Sciences.

Research interests of his group include supramolecular polymerization of donor-acceptor π-systems, H-bonding driven directional assembly of amphiphilic π-systems/macromolecules and biologically relevant stimuli responsive aggregation of amphiphilic polymers (polydisulfides, polyurethanes). He has about 100 publications in peer reviewed journals and ten PhD students have graduated from his group. He is the recipient of the B. M. Birla Science Prize in Chemistry (2014), JSPS Invitation Fellowship (long term) Japan (2014), SwarnaJayanti Fellowship (2015) from the Department of Science and Technology, Government of India, K. Kishore Memorial Award (2016) from the Society of Polymer Science, India and the Bronze medal (2017) from the Chemical Research Society of India. He has been serving as an Associate Editor for the journal RSC Advances since 2015.

What was your inspiration in becoming a polymer chemist?

I was introduced to Polymer Chemistry by two captivating teachers (Professor Manas Chanda and Professor S. Ramakrishnan) during my Master’s Degree course work in the Indian Institute of Science, Bangalore. Subsequently I had an opportunity to carry out a year-long MS project on Polymer Chemistry under the supervision of Professor S. Ramakrishnan when I started learning more about the subject. From group discussions and seminars in the department, I learnt about the emerging topics (of the time) in Polymer Chemistry such as foldamers, molecular imprinting, conjugated polymers, helical polymers, amphiphilic polymers, supramolecular polymers and so on. I was greatly inspired by such diversity in the field and its interdisciplinary nature connecting chemistry with biology and materials science.

What was the motivation behind your most recent Polymer Chemistry article?

Poly(disulfide)s (PDS), although known for long time, lacked structural diversity in the absence of any generally applicable synthetic methodology. Recently we had established a mild step-growth polymerization approach to make linear functional PDS by a facile thiol-disulfide exchange reaction between commercially available 2,2′-dipyridyldisulfide and a di-thiol.  By taking a stoichiometric excess of the first monomer, telechelic PDS could be prepared with the reactive pyridyl-disulfide groups at the chain terminal which could be further functionalized by a functional thiol without disturbing the backbone disulfide groups. This motivated us to extend this approach for the synthesis of hyperbranched PDS, particularly considering the possibility of decorating such hyperbranched polymers with multiple reactive pyridyl-disulfide groups at the periphery for post-polymerization functionalization to produce a range of functional hyperbranched polymers with a fully bio-reducible disulfide backbone. We have exactly demonstrated this in our recent Polymer Chemistry paper and envisage that it might allow the screening of structurally diverse amphiphilic hyperbranched PDS for biological applications such as drug delivery.

Which polymer scientist are you most inspired by?

I am most inspired by Professor E. W. Meijer (Eindhoven University of Technology, The Netherlands), especially because of his pioneering fundamental contribution in the field of supramolecular polymers by connecting supramolecular chemistry and polymer chemistry.

How do you spend your spare time?

I like to cook, spend time with my 10-year-old daughter and socialize with like-minded people.

What profession would you choose if you weren’t a scientist?

Read Suhrit’s full article now for FREE until 8th May!

Disulfide containing polymers have been extensively studied as responsive materials for biomedical applications such as drug delivery, gene delivery, bio-sensing and receptor-mediated cellular uptake due to the possibility of cleaving the disulfide linkage with glutathione (GSH), a tri-peptide overexpressed in cancer cells. While linear and branched polymers containing disulfide groups have been already studied and more recently polydisulfides (PDS) have come to the fore, hyperbranched polydisulfides (HBPDS) were not known. This manuscript for the first time reports a generally applicable methodology for the synthesis of HBPDS by an A2 + B3 condensation approach. The B3 monomer contains three pyridyl-disulfide (Py–Ds) groups while a di-thiol compound serves as the A2 monomer. A polycondensation reaction under very mild reaction conditions produces HBPDS (Mw = 14300 g mol−1, Đ = 1.9) with a very high degree of branching (DB) value of 0.8 and more than twenty highly reactive Py–Ds groups present at the terminal or linear unit of a polymer on an average. The reactive Py–Ds groups can be completely replaced by post-polymerization functionalization using a hydrophilic thiol resulting in bio-reducible amphiphilic HBPDS. It produces micellar aggregates in water with a hydrodynamic diameter of ∼80 nm, a low critical aggregation concentration (7.0 μM) and a high dye (Nile red) loading content. The exchange dynamics of these micellar aggregates, studied by fluorescence resonance energy transfer (FRET), reveals practically no inter-micellar exchange after 6 h indicating very high non-covalent encapsulation stability. On the other hand, in the presence of glutathione, the PDS backbone can be degraded resulting in an efficient triggered release of the encapsulated dye. Dye release kinetics strongly depends on the GSH concentration and interestingly with a fixed concentration of glutathione the release kinetics appears to be much faster for the hyperbranched PDS micelle compared to its linear analogue. MTT assay with two representative cell lines indicates that the amphiphilic HBPDS is biocompatible up to 500 μg mL−1 which is further supported by hemolysis assay showing merely 6.0% hemolysis up to a polymer concentration of 500 μg mL−1.

Simon Harrisson is a Chargé de Recherche at the Centre National de la Recherche Scientifique (CNRS), based at the Laboratoire de la Chimie des Polymères Organiques (LCPO) in Bordeaux, France. His research seeks to apply a fundamental understanding of polymerization kinetics and mechanisms to the development of new materials. He is an Advisory Board member for Polymer Chemistry. Follow him on Twitter @polyharrisson