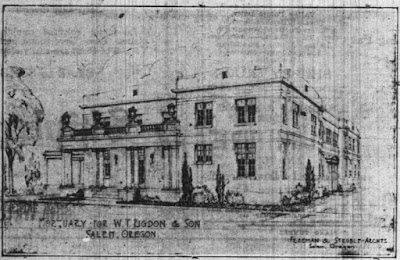 As the demolition on the YMCA got started this week, and as the IKE Box continues to raise funds to purchase their site and building from the Y, 100 years ago, W. T. Rigdon, who built the funeral home the IKE Box now occupies, published a nativist and anti-immigrant poem in the paper, "Purge thy fair and sacred soil."

A few years before that, he'd lost his daughter to a reckless driver, who killed her as she was crossing Church Street, and he may have turned to poetry in his grief. Truth in Pleasant Rhymes was published in 1927.*

This poem from 1919 seems to be a direct response to the riot and deaths in Centralia, and more generally part of the "red scare." Since the riot, two men had been arrested as IWW agents after Salemites overheard a "suspicious" conversation in a barber shop, and it took a couple of days for them to establish their innocence. Veterans groups had also called mass meetings at the Armory pledging to drive out the reds. Given his position in Salem society and dependence on their business, Rigdon would not risk a public statement like this, published in the morning Statesman, unless he was sure it would be popular.

PURGE THY FAIR AND SACRED SOIL.
America, thy troubled soul doth cry aloud;
Thy mighty heart doth burst and bleed while once 'twas proud.
A mighty task, with open arms, thou did's assail.
Was thy great love but spent in vain. Did not avail?
Thine offer was to the oppressed wherever found.
Thy hate of tyranny was thy key-note sound.
"The lacerated and bleeding heart shall ever find relief;
The loving soul of America will e'er assuage they grief.
Come, Oh come, from every shore, to my great heart."
This was they constant slogan call; thy trumpet blast.
But, Oh! thou wert too freely taken at thy word.
That slogan call aroused the world; all nations heard.
Too many flocked unto thy shores, to seek relief,
Not from oppression's master hand; 'twas make belief;
But from the hand of outraged justice had they escaped.
Thy virgin country which embraces them was foully raped;
And now the base ingrates we see with sword in hand
To strike their benefactress down in Freedom's land.
O thou asylum of the oppressed, spare not thy curses,
Thou hast been turned into a slaughter-pen for thy nurses!
No, no, 'tis not a living wage, alone, they seek.
Nor holy vengeance on the millionaire to wreak.
The besom of destruction they would spread, alike.
On guilt or helpless innocence; all should yield to might.
To stand for honor, justice, civic pride in any form
Is. in their eyes, an unbearable offence not to be borne.
O, America, thou hast loved too well without discretion.
Kindness, comforts, caresses needeth strong confessions.
Arouse, Americans, arouse! with thy mailed hand
Purge thy fair and sacred soil from all this hellish clan.
This poison upas tree must fall and with it take
Its every root and branch into that fiery lake.
America for Americans, native born or well assimilated.
No others shall be considered and none others e'er contemplated.
No more our flag must fly o'er hellish anarchy.
No more our listening ears shall hark to harping blasphemy.
I yet would live to see the day - O, can it be?
When freedom's flag, once more, has freed its folds from anarchy.
Salem, Oregon, Nov. 20, 1919. - W. T. Rigdon.

His daughter's death in November of 1916 was gruesome:

Miss Ethel Rigdon, teacher of English in the high school, and one of the best known instructors in the city, was struck by an automobile last night at 7:30 o'clock at the intersection of State and Church streets and as a result of injuries received, died today noon at the Willamette Sanitarium. The car was driven by Asa Tindall, of 938 Trade street.

In company with H. O. Clancy, former athletic instructor of the high school, Miss Rigdon was crossing Church street on her way from the post office to the Oregon Electric depot. They were almost across the street when a car driven west on State street by Asa Tindall dashed out of the night, turned into Church street and instead of keeping on the right side of the street, swerved to the left in making the turn, and struck the two.

Miss Rigdon was thrown to the pavement, suffering a fracture of the skull and other injuries. She was rushed to the Willamette hospital....

The crash immediately seemed negligent, the result of "a high and dangerous rate of speed" and "proceeding on the wrong side of the street," and the DA initiated charges.


But in what looks like an early expression of autoist bias, a grand jury declined to bring charges.

Regarding the case of Asa Tindall, who was charged with involuntary manslaughter in connection with the death of Ethel Rigdon, District Attorney Gehlhar said he was surprised at the action of the grand jury as he expected a true bill would be found. Although what happened behind the doors where the jury was holding its sessions usually remains a secret, it has been rumored...that the vote for the indictment was close...and it is reported only one vote was lacking.

A few years later, in 1919, just after publishing the poem, Rigdon announced what they claimed was the first motorized funeral car in Salem. It's possible that placing the poem was also a kind of PR preparatory to this announcement.

The ad for the new mortuary's opening in 1924 also discloses the name of architects that have not much been discussed in Salem, Freeman and Struble, who seem to have been active as a partnership from about 1922 to 1928. That might be an avenue for more investigation.

Rigdon died after a long life in 1942 and is buried in Mount Crest Abbey Mausoelum at City View. The IOOF cemetery's notes have a brief timeline on Rigdon's undertaking activities. He is certainly someone in Salem history about whom more should be written!

* Unfortunately it's not active any more, but WU Professor of English Mike Chasar had an interesting and witty blog "Poetry & Popular Culture," in which he wrote about occasional, popular poetry like this. He's got a full length book, Everyday Reading: Poetry and Popular Culture in Modern America, if you are interested in that, and one or two new books about poetry and pop culture in the pipeline apparently.
Source: breakfastonbikes