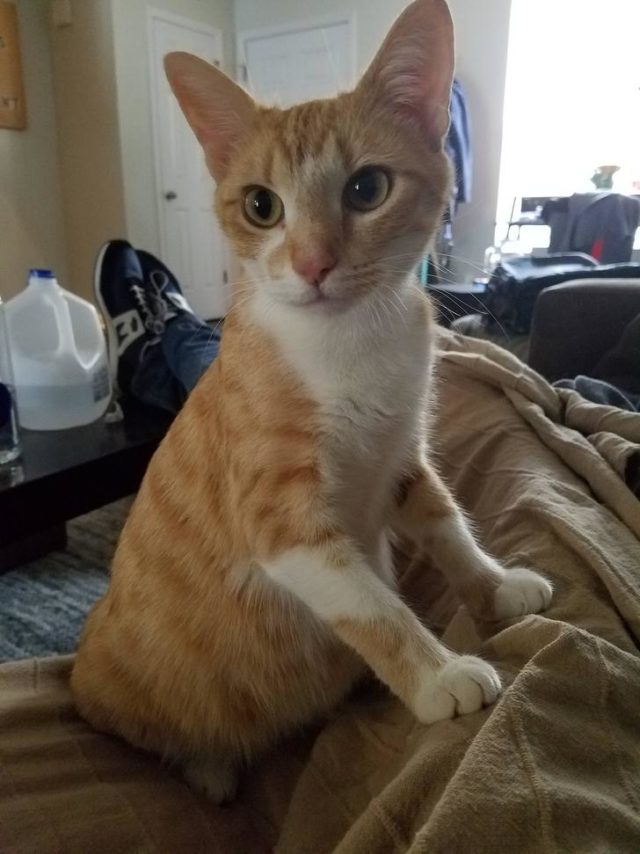 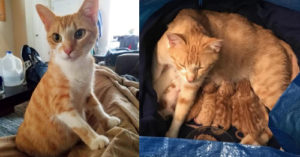 Sometimes cats choose us as their humans before we’re even sure what’s happening. One day we meet a cat, give the sweet kitty some snuggles, and the next we’re head over heels in love with jellybean toes and tickling whiskers. This exact situation happened with a woman and the cat who claimed her.

But, when Boots the cat claimed Rachel, little did she know, there was about to be a whole litter of love coming her way.

Meant to Be with a Mom to Be

The early days of November brought a ginger cat to the porch of Rachel’s home. When she opened to door to say hello, the friendly cat padded right into the house. A quick peek at the surroundings and the folks inside and Boots knew she’d found her home.

With Boots’ tummy stripes stretched across her round tummy, there was no missing she was heavy with kittens. But love blossomed in an instant and Rachel knew the ginger cat was family, including her tiny kittens that would soon come along. 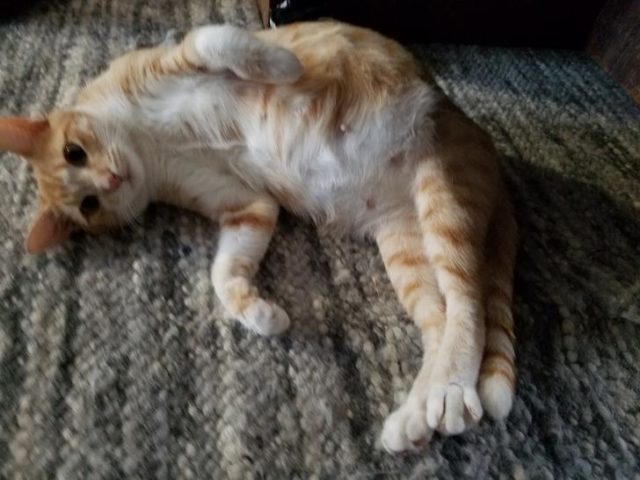 On Imgur, Rachel wrote, “This little lady showed up a few weeks ago on my doorstep, hungry and pregnant. Of course I fed her, and with that she adopted me.” 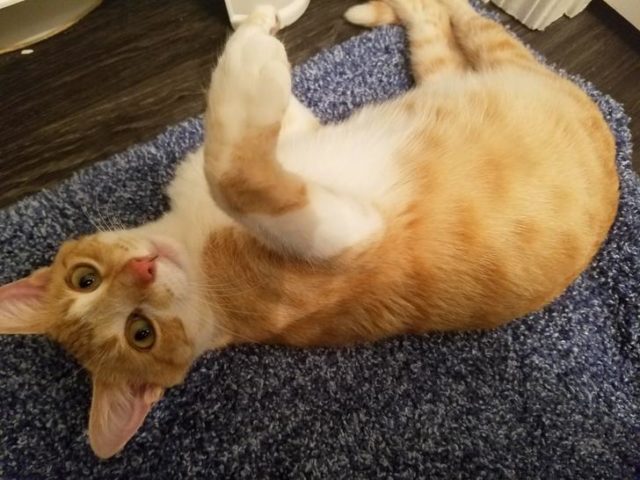 Seeing how fast the pregnant cat made herself at home, Rachel gave her a big bowl of kitty chow. “She was eating more food than I thought possible — it was quite impressive…. She now ran this house and completely overtook all of my usual sensibilities.”

Rachel was most certainly smitten with the orange and white tabby cat.

Boots and Rachel made a trip to the vet, which, as cat lovers know, can be a dicey endeavor. When it comes to taking a cat to the vet for the first time, one never knows what to expect, hissing fury or dignified acceptance. But Boots’ sweet demeanor never faltered and from weigh-in to exam, she was, put simply, a good cat.

“This little loving ball of fluff laid on the scale at the vet, purring. I’ve never met a sweeter, gentler cat,” said Rachel. 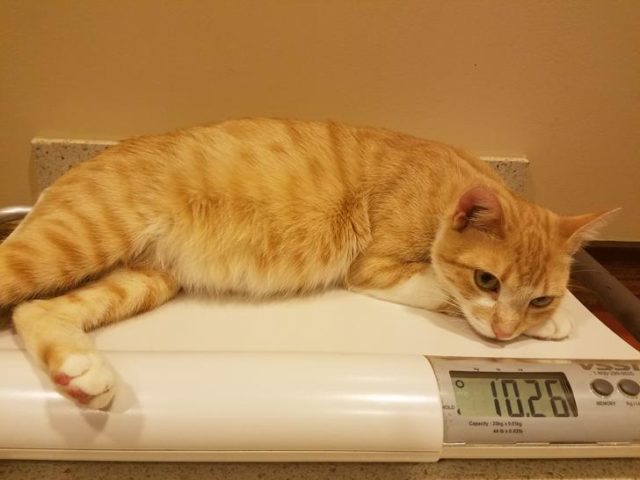 The vet said Rachel could anticipate 4 or 5 kittens, but Mother Nature loves to surprise her children.

Late in November, Rachel woke to the sound of newborn kittens and their tiny ‘mews’.

Rachel reported, “We woke up to SEVEN baby beans in a cute kitten pile! I was shocked.” 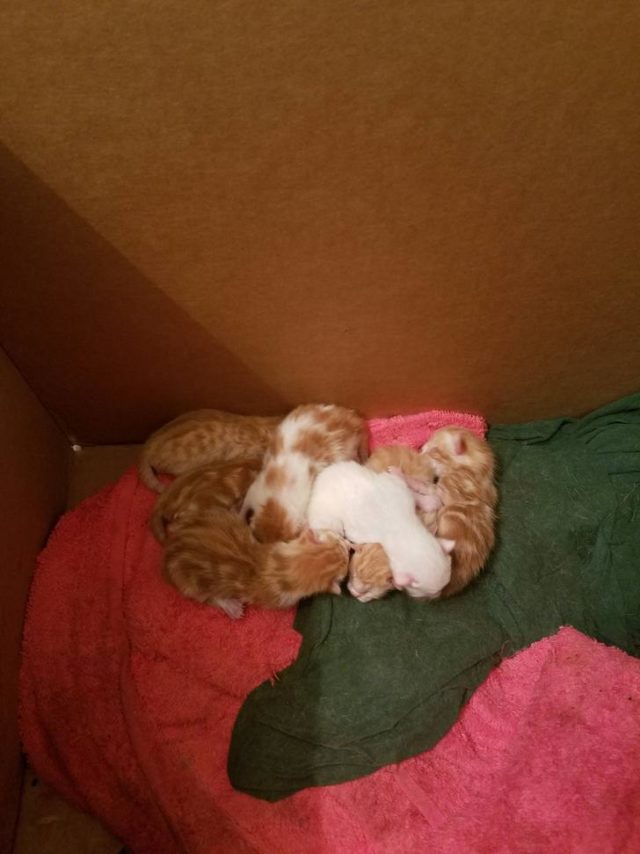 “We got 6 orange tabbies that look like mama and one solid white.” With 7 kittens, Rachel was put in mind of Snow White and the feline family became known as “Boots and her seven Dwarves”. Dopey, Sleepy, Bashful, Happy, Grumpy, and Sneezy were all orange and white kittens while the sole completely white kitten became known as Doc. Of the kitty family, Rachel gushed, “Boots is a good mommy to her little beans. The babies fight for nipples and the white one is super pushy and will knock the other babies off the one he wants.” 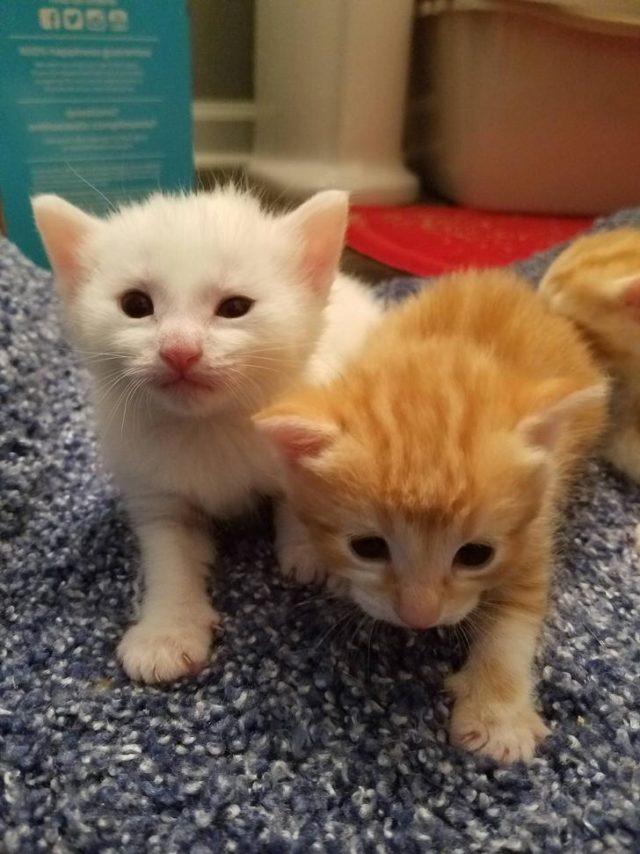 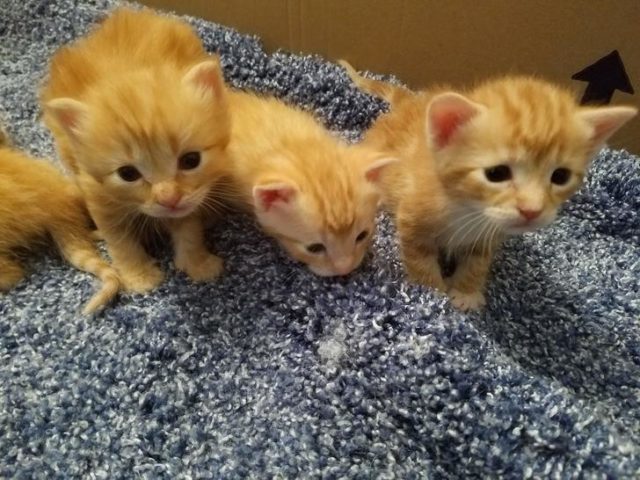 A Lot of Work, But So Much Love Makes the Labor Easy

Rachel knew taking in a pregnant cat would be tough, Boots and the kittens would mean rearranging life as she knew it. But Boots was family and caring for family can be difficult sometimes. Though when family comes in the shape of adorable kittens and their darling mother, care-taking is a joy. 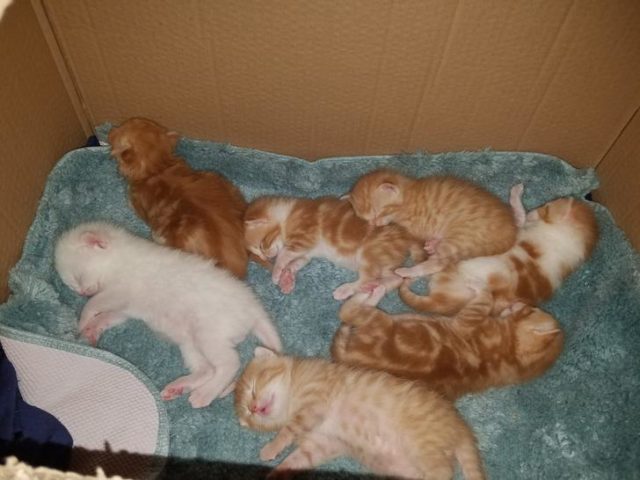 “Boots adopted me and I just went with it. Seven babies is a tad overwhelming but It’s an incredibly special experience.”

Boots knew Rachel was up for the challenge when she chose her because cats are brilliant! “It was a beautiful and special experience. It was unexpected, a lot of work, and I’m so grateful to have experienced it and saved these eight little lives.”