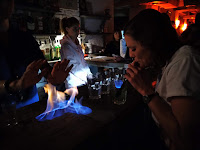 As they serve their Ukrainian food to the people (163Cong.Rec.S1586)

Hopefully, my last post convinced you that Ukrainians are humorous, melodious, and generous. I like to think I share a few of these traits with people from my former, temporary home. But if I'm being honest, the characteristic we have most in common is being gluttonous. Food and drink play a central part in daily life, but especially in celebrations.
I was invited to a birthday fete where I was told tMadagascar characters would make a special appearance. Was this a party for a child? No. Was this party at an establishment much like Chuck E. Cheese's? No. Did I still go? Yes. The adults-only event was held at one of the swankiest restaurants in town, Alaska (top left). I almost didn't pass face control when I showed up in shorts, not realizing it was a place where VIPs mingle with Furries (top right). But trust me, I am not judging. I can dig an over-the-top dining-out experience, especially when it involves using a tarot deck to choose a cocktail (bottom left). My sexy card foresaw a bourbon-based drink in my future at Lysa Gora, which is translated to and named after Bald Mountain, a site of witch gatherings (bottom right). 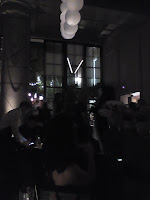 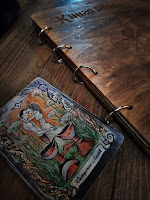 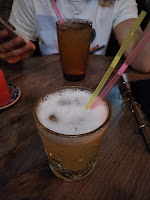 When it comes to beverages, witches don't have anything on lunatics. At Palata No. 6, named after a short story by Chekhov about an insane asylum, the staff serve up some crazy-complicated concoctions, many of which involve fire (top left). If you prefer not to risk singing, you can be strapped into a strait jacket and be forcefed a shot by a nurse-cum-server (top right). By far, most people opted for a display that made no sense at all; it entailed wearing a helmet, so you could be smacked on the head with a keg (bottom left) before being shielded from the flamethrowing spit of a bartender (bottom right). 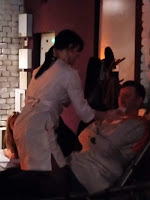 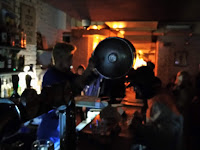 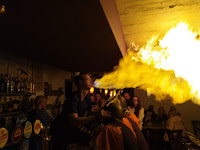 If you're looking for a tamer theme-restaurant experience, the place to be is definitely Last Barricade, an underground restaurant that requires a password to enter its hand-covered doors (top left). At first, the interior presents as a typical hip, chic dining room (top right), although with the addition of a moving bar. The restaurant, however, is also a museum, displaying artifacts from the country's recent history, including the Orange Revolution (middle). Surprisingly, considering its clear patriotism, the restaurant's menu doesn't really showcase Ukrainian dishes. Sure, my table shared traditional toasts with salo on rye bread, washed down with horseradish vodka (bottom left). But then, the meal turned more continental. Many people had steaks, the restaurant's signature dish. I had some burrata, which as far as I know has no roots in pre- or post-Soviet environs (bottom right). 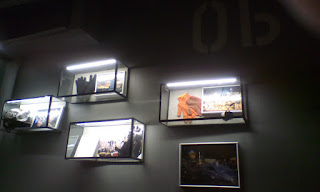 Probably my most authentic meal was my going-away dinner at Pervak. Much like at Last Barricade, my friends and I shared salo on rye bread accompanied by vodka, this time sans horseradish (top left). I followed that up with okroshka made with kvas (top right). We had ordered a flight of tinctures, which I finished with my entree of deruny. When I got back to Ohio for home leave, I re-created the dishes for my dad, although I made the okroshka with the more easily attainable yogurt instead of kvas (bottom). 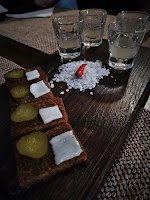 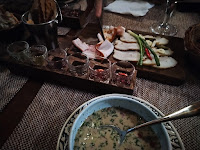 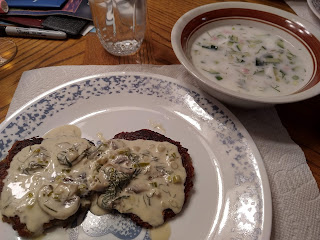 I hate to say it, but I'm not the biggest fan of Ukrainian food, especially its inexplicable emphasis on dill. So I was certainly happy that Kyiv offered many tasty ethnic options. There were the usual suspects -- Chinese, Indian, kebab -- but there were standouts as well, such as Smorrebrod (top left), named after the traditional Danish open-faced sandwiches it served (top right). During my time there, Ukrainians were definitely buying into the American burger craze. Unfortunately, one enticing food truck disappeared shortly after I arrived, and shortly after its namesake left office, so I never got to try an Obama burger (bottom). 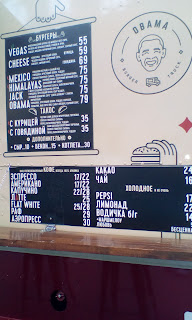 I did manage to sample a spookily-styled sandwich with blood-red cheese at Punkraft (top left). As part of its Halloween party, the gastropub also offered complimentary old-lady fingers (top right). The bar was a perennial favorite of mine, due to its fulsome, free bar tastings (bottom left). One presentation, by Mad Brew, featured 14 plentiful pours! Multiple places were making inroads in the burgeoning craft-beer scene, but one establishment dominated the wine set. Sadly, the degustations at Good Wine were far from free and provided much more limited liquid (bottom right).

Overall, the best bets to sample food and drink alike usually were culinary events, like a Mega Market-sponsored beer festival that offered a mix of imported and domestic brands (top). Outside on the patios, in the shadow of St. Andrew's Cathedral, the grocery chain set up stalls hawking its store-made products (bottom left). A selection of bread, cheese, and charcuterie complemented any of the many brew styles (bottom right). 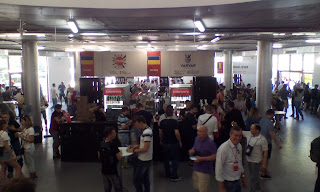 As they serve their Ukrainian food to the people (163Cong.Rec.S1586)