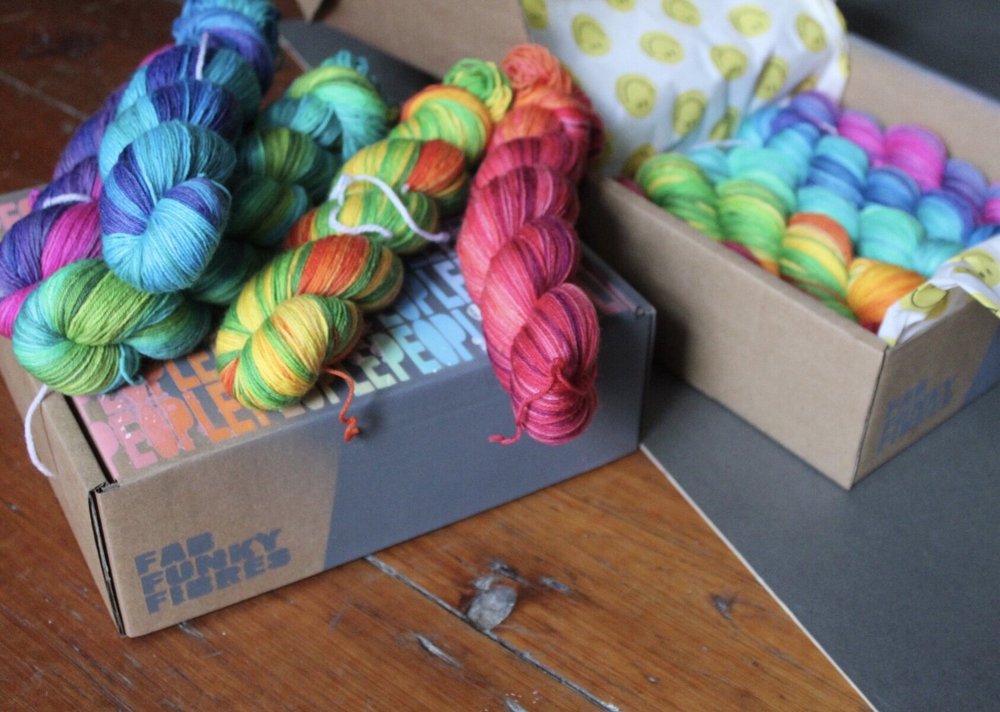 How many rainbow FOs (finished objects) is too many? I’m asking for a friend…

Just kidding, we all know the answer to that: you can never have too many rainbows! Well, I can’t anyway. Can’t stop, won’t stop knitting rainbows!

My love of rainbows, specifically the Fab Funky Fibres brand of rainbow awesome, is, ahem, very well-documented. My love of Martina Behm’s simultaneously relaxing and clever patterns is also longstanding and abiding. Earlier this year, those two loves collided and resulted in my much loved Circle and Square Hat. When Martina released her Quadra Cowl, I knew the perrrrrfect yarn to use.

I’d been after a pattern to showcase my treasured Fab Funky Fibres Come Together set, and here was the perfect opportunity!

Let me tell you why I keep coming back to Martina Behm’s patterns. If we imagine a Venn diagram with one circle being “Clever Knits” and the other “Comforting Knits”, the overlapping section is pretty small. Because clever and comforting is hard to do simultaneously. But Martina has the magic formula. Throw in an amazing yarn, and it’s pretty much knitting paradise.

So take the Quadra Cowl… You begin by knitting a square. The instructions are clear, and they’re easy. You are just knitting along, regularly increasing, until you use up half of your yarn. In my case, that was until I used up half of a small Come Together set … so about 80g.

Then you do a Thing. I’m going to come back to that Thing in a moment. And once the Thing is done, you then carry on knitting, decreasing at regular intervals.

And what happens in between? Well, it’s a bit of knitting origami. Looking at the pattern, you might start to panic. But Martina explains it all so clearly, and there’s a video, and it’s one of those things that if you just do as you’re told, it all works out.

And what do you end up with? A fabulous cowl, that can be folded and worn to show off different parts of whatever beautiful, amazing, treasured self-striping, gradient, mini skein set you’ve used. The other brilliant thing about this pattern is it’s really easy to adjust to your yarn, bearing in mind that the depth of the cowl is always going to be half of the circumference . The magic of Martina is that both a beginner, and someone who has been knitting their whole life, can knit it and still find it a marvel.

As I mentioned, I used the small Fab Funky Fibres Come Together set here. It clocks in at 165g (5 x 33g skeins) and it’s made a cowl that’s really a fabulous size.

At time of writing, we’ve only got two of these sets left, so if you’d like a Rainbow-Quadra-Cowl-Of-Joy of your own, shake a tail feather and scoop yours up, or alert your gift getters!

The Come Together sets, which contain between 165g and 365g divided among five skeins, are perfect for folks who want to luxuriate in the joyfulness of Fab Funky Fibres rainbows, but perhaps don’t fancy knitting socks. A medium set would be great for making one of Ambah O’Brien’s advent patterns. I love the idea of an Adventuresome Wrap or even her soon-to-be-released Party Cardy (depending on size, you could use a medium or large kit, with a coordinating skein if necessary). Or how about a Rocky Mountain Rainbow Shawl that’s rainbow from start to finish? Divine!

And of course, if you do fancy some socks, the Come Together Sets let you make socks for the family or friends! The medium set contains five 53g skeins… pair with a couple of skeins of Socks Yeah! 4ply for heels, toes and cuffs (we love Quartz, Melanite, Danburite or Iolite to go with these rainbows), and you’ve got five pairs of rainbow socks. Lovely for gifting, or wear a different colour every day to brighten your week!