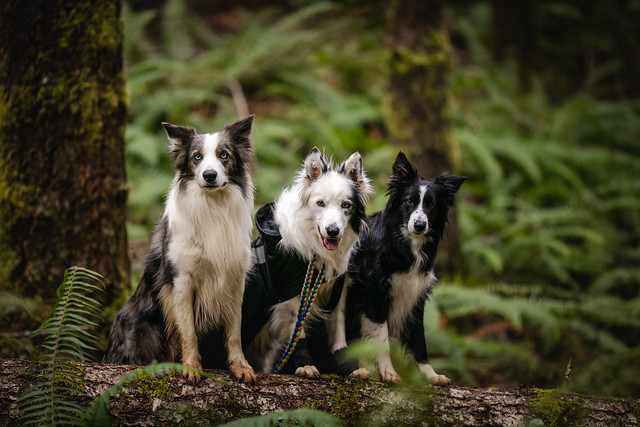 We had our first herding injury, not to Navarre or me, but to a sheep. I’m not sure when it happened, but a sheep broke its leg – I assume when Navarre was bringing them out of the trees. Navarre wasn’t doing anything inappropriate or dangerous, but it happened none-the-less, and it makes me very sad. I didn’t want to ask, but I assume sheep that break their legs don’t get little sheep casts.

I hate to think of anything I’m doing to be actually hurting another animal. And I realize it was probably just a freak thing, but it was hard to see that dangling leg. And I was trying to help bring the sheep all the way back down to the pens afterwards, but Navarre is NOT the dog I wanted anywhere near that sheep after that so I’m sure I was no help at all trying to stay 100 feet away at that point.

So that put a sad damper on my feelings about herding, as I really don’t want to hurt any sheep. I recognize that herding is about stock first and the dog second, but it’s been easy to focus on the dogs instead as my boys are so polite. They are perhaps too respectful – I definitely prefer that to any sort of gripping or chasing. Navarre will occasionally goose some sheep in a drive-by slice, but that’s about the worst thing either of them have ever done.  So I’ve just never worried about the safety of the sheep when herding, but shit happens, unfortunately. So a hard note to end on, though we did do a little more afterwards, but my heart wasn’t in it.

Now, before the broken sheep, things actually went fairly well. Sticking to the same plan, Ian works Navarre, then I do. Ian worked on introducing whistles again, where, apparently Navarre is not a Whistling Natural. I guess some dogs pick it up very quickly … Navarre is not one of those. Our whistle work at home didn’t appear to have done much either, though my whistles probably sound a lot different than Ian’s anyway. Still, no rush, I suppose, he’ll get them when he gets them. The thing about Navarre, we have all the time in the world.

Then Navarre and I did our clumsy herding thing, but I did actually feel much better in general – like we have a tiny start of working together. That often requires me to ask everything three times, but Navarre seemed to be giving me a bit of slack today and actually including me. A little. I tried to do my best, Navarre seems to kind of suck at holding a straight driving line these days, and that’s really hard to fix with him. Need to remember to lie him down before asking for a flank to fix his bad lines though, things can go badly … rather quickly. Not in a horrible ‘sheep everywhere’ kind of way, just in that he’ll just bring them back to me. So still too fast, too close – but nothing as ridiculous as last week. I will say a tiny bit of progress which made me feel a lot better. Someday we may be able to do this. Hopefully.

At one point Ian and I were talking and the sheep made a break for the trees, Navarre caught them once (incorrectly, instead of flanking out he just put on the power boosters to go faster to head them off). The second time they did it he probably would have caught them, but he really didn’t want to send on his come-bye side, so while we screwing around with that the sheep got into the trees. Then we finally got Navarre to go on the correct flank into the trees … and the guardian dogs chased him off – arrgh. Poor guy, we finally got him to believe we knew what we were talking about and he got told off by some big dogs for it. Anyway, so we finally get him into the trees, and it took a bit for him to figure out to gather them out of there – he just wasn’t sure how to handle all the obstacles, but finally got them … and the broken sheep. The trees are not my favorite place to be, that’s for sure. 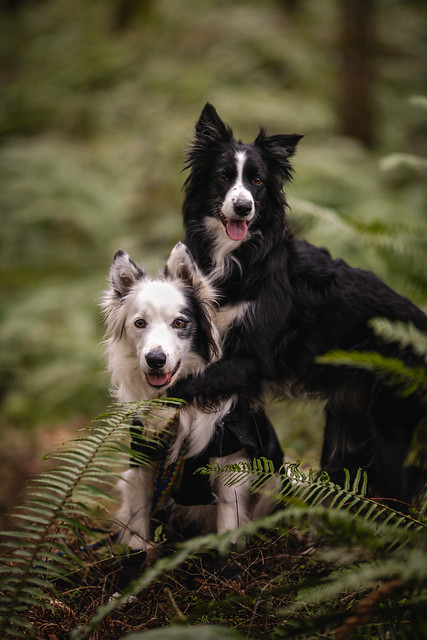 We also went out and saw Dave this week, where Dave found him ‘exceptionally pushy’. Which was kind of funny, as watching I felt like Navarre’s been much pushier than this. Working with Heather makes Navarre REALLY cocky, apparently. Which is why I still want Ian and Dave to work with him, he’s got a big enough head around sheep as it is.

Navarre does seem to have a different response at Dave’s place vs Ian’s place, which I initially assumed was the difference between the two trainers – but I think it may have more to do with the sheep. At Ian’s it’s always a ‘herd’ of sheep, like 6-20, who are very much non-fetchy. While at Dave’s it’s almost always three sheep, which are not super fetchy, but I think more so than Ian’s. We seem to work a lot around fences at Dave’s, while we are almost always in the middle of a huge field at Ian’s – not as many strong draws and pressure. Ian’s is flat, Dave’s is on a hill. Anyway, the point being, I’ve been a little surprised at the different dog that shows up at each.

At Dave’s this week, Navarre driving was way better – but his outruns were worse, especially his come-bye side (which is true at Ian’s as well). I always feel at a loss to fix bad outruns, and Navarre is no exception. So he just kept coming in and eyeing up before he got to balance, not super helpful. After watching Dave sprint all the way up the hill to fix it several times, I’ve decided to ignore that one for now. Navarre is better at Ian’s, so that gives me hope that it will magically fix itself – or someone else will fix it. I’m not much into hill sprints.

Then it was my turn with Navarre, and I really do feel so much calmer with Navarre … relatively speaking. And mostly when we’re driving, not fetching – which is what I’m going to focus on at the moment. It’s actually surprisingly easy to change Navarre’s speed on his drive, and get his down. It gives me great hope that we’ll be able to do this without butting heads the entire time. Eventually. So, yeah, weirdly enough, I already feel much better about Navarre’s driving than Haku’s, and the REALLY weird part – I also feel like I have much more ability to get Navarre to down on his fetch than Haku. Go figure.

Ended up feeling pretty good about Navarre and his unexpected change from backup dancer to main performer. Not what I had planned to do, but so far, so good – and it has been, mostly, fun. WAY more fun for Navarre though, he loves the sheep more than anything, he’s a different dog out there. Assuming Haku comes back next month, Navarre is going to be very put out.

We also plan to practice on Sunday. On the list is working on getting Navarre not to stop short when flanking and working on putting his walk up and stop whistles on sheep. It’s possible I could try his flank whistles as well, but I don’t think they sound very much like Ian’s. But they may never, so, hey. And driving, we can work on driving without getting in too much trouble. Hopefully. 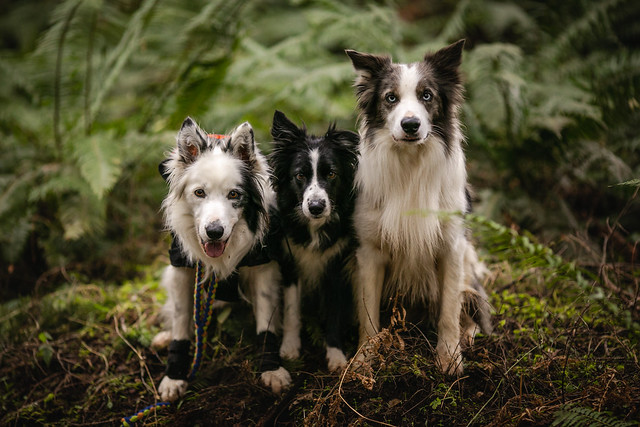 I am a little less optimistic about Haku’s recovery time. We have been doing our heat and cold, stretching and assisi loops and keeping it chill this week. I decided to take him on our hike today, as they said that on-leash hiking would be fine. Haku thought it was kind of stupid, but still enjoyed the day. We kept it short and didn’t stay out too long, but he was limping by the time we were turning around and he was really off that afternoon. So that’s not a good sign. He continues to look the same, really. It hasn’t been that long, but not miraculous recovery so far.

The vet was not happy to hear that he couldn’t go for what was basically less than a one hour on leash hike before he started limping. Naturally, at his rehab appointment the day after he was doing none of that – and jumping around like a total spaz. She even tried putting him through some cavelettis to try and see where he was offloading, but he refused to walk through them, but did some very impressive serpentining and jumping. So back to taking it REALLY easy, he did his water treadmill and laser and we’ll back on … Monday? Assuming it doesn’t snow. Hoping to see Maddy this weekend as well.

While Navarre has been progressing in herding, I swear he’s regressing in agility. Bright has been good to pick up where we left off, but I swear everything I ask of Navarre we have to relearn it all over again. And here I thought he was a trained dog! Piff. Good thing we’re not trialing any time soon, I guess. He has a good time, as always, and got to run with his good friend Robert this week, who does a much better job at running than I do. So it’s all good. Right now I don’t have any plans to enter any agility trials until maybe April, which means we’ll have had about 6 months off trialing at that point. Which I was thinking was the longest break we’ve had from trialing, but this is actually not my first long break, I go through phases. Agility will have its day again, hopefully once Haku is ‘fixed’ and he’s not taking all my money. 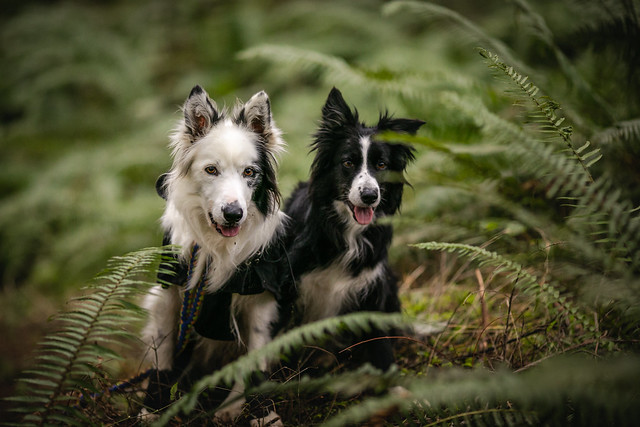