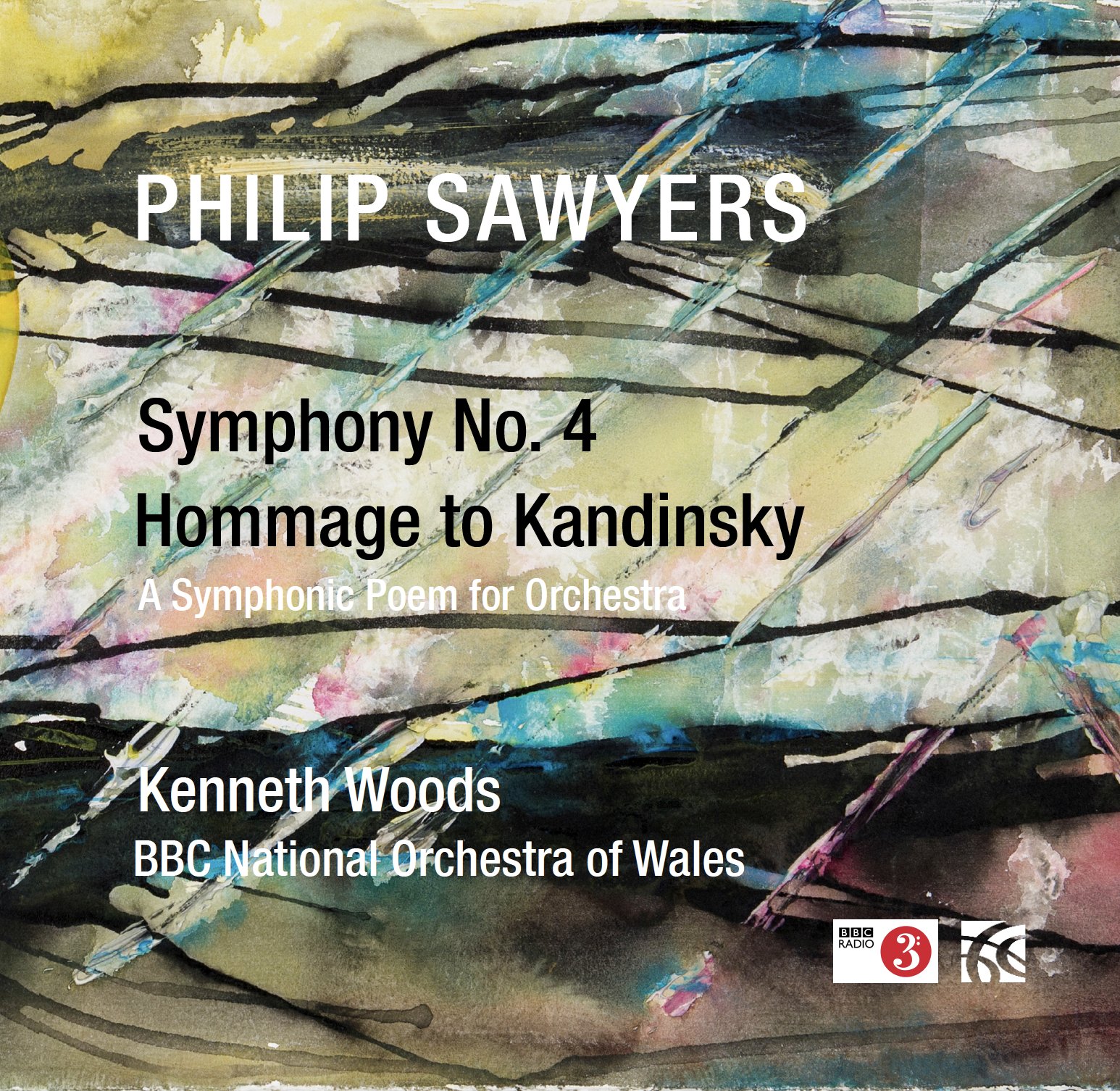 TUNE IN
Broadcast Premiere with the BBC National Orchestra of Wales 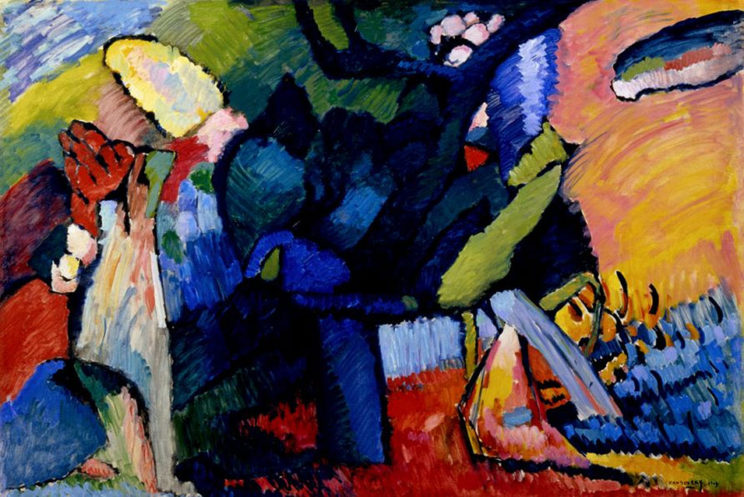 Kandinsky’s Improvisation IV (1909), one of the works in the 2006 exhibition which inspired “Hommage to Kandinsky”

The large-scale symphonic poem Hommage to Kandinsky was commissioned by the Grand Rapids Symphony in celebration of the tenure of their longstanding Music Director, David Lockington, who premiered the work in September 2014. It is dedicated to “David Lockington and the Grand Rapids Symphony Orchestra in appreciation of a decade of musical fulfilment.” It was Lockington who had commissioned Sawyers’s First Symphony for the GRSO in 2004, and it was that commission, and subsequent Nimbus recording, which, in many ways, opened the way for Sawyers’s recent surge of productivity and acclaim.

Given the celebratory nature of the occasion, the orchestra encouraged Sawyers to employ the largest orchestra he had yet written for: 2 flutes and piccolo, 2 oboes and cor anglais, 2 clarinets and bass clarinet, 2 bassoons and contra bassoon, 4 horns, 3 trumpets, 3 trombones, tuba, timpani and percussion, harp and a large string section.

The work’s subject matter had its origins in Sawyers’s attendance at an exhibition “Kandinsky: The Road to Abstraction” at the Tate Modern in London in 2006. The composer explains:

Having lived with an artist for 43 years I have gradually had my ‘eyes opened’. For a musician music is the art form. Poetry, with its rhythms and cadences always appealed to my musical side and I loved literature. Some painting did evoke a response when I was much younger, but I was less moved by the visual and had many blind spots.”

Living with an artist changed all that and I began to appreciate the ‘musicality’ in painting with its tones, lines, forms and textures ‘singing’ from the canvas. This exhibition was huge and traced Kandinsky’s work from the earlier representational paintings to the later abstracts. The developmental journey is one which many artists and composers undertake, and the whole experience seemed to mirror my own journey. I have seldom been so excited and involved with a display of visual work in its entirety. Thus the urge to write a piece which reflected my feeling about his paintings was born.

It was probably natural that Sawyers would be particularly drawn to the work of Kandinsky, who was one of history’s most musical painters, and who, as a synesthetic artist, equated visual colour and musical tones, as Sawyers notes:

Kandinsky himself referred to the idea of painting as music with some works being deliberately designated – such as ‘Fugue’ of 1914, ‘Bagatelle’ of 1916 and several works just entitled ‘Improvisation’. He and Schoenberg had a lively correspondence and Kandinsky felt they were both travelling the same path.

Although Sawyers took particular inspiration from several paintings in the exhibition, the resulting tone poem represents primarily an emotional response to Kandinsky’s work rather than an attempt to respond literally to Kandinsky’s images in music. There is, however, one telling example of Sawyers using the paintings as a source of musical material:

I deliberately created a musical theme following the ‘lines’ in ‘Composition IV’ of 1911,

a bit like a graphic score. This idea first appears in the cellos and basses very near the start of the piece. However, it would be misleading to look \for anymore similarly literal transmutations. 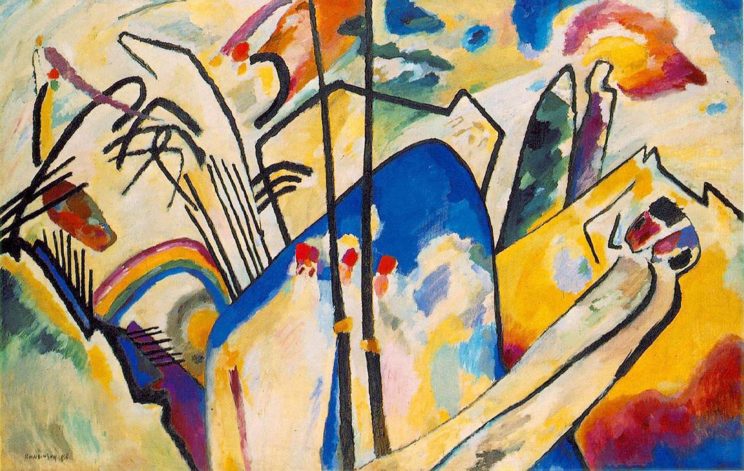 Sawyers also found an apt programmatic use for his trios of wind and brass instruments:

The piled-up major triads presented polytonally in a quick rhythm, first heard in the fourth bar and recurring throughout the piece, are representative of Kandinsky’s great ‘splashes’ of colour. Because I had three of each woodwind and brass instrument to work with, these triads could have a pure instrumental colour. It’s something that I couldn’t have done with double woodwinds because the third voice would have to be a different timbre, so it was a nice use of the larger orchestral forces.

Although written in a 21st Century musical language, there are strong similarities in Sawyers’s approach to form in this symphonic poem and that taken by Richard Strauss over a century earlier. In both cases, the work’s relationship to its subject matter is more poetic and evocative than programmatic and descriptive, and the external poetic inspiration is expressed within a rigorous, abstract musical form. Hommage to Kandinsky has many of the elements of a hugely expanded, and somewhat modified, sonata-allegro form such as one might find in Strauss’s Ein Heldenleben or Tod und Verklärung , or, for that matter, the first movements of Mahler’s Sixth of Seventh symphonies.

On the surface, the work is quite sectional, with recurring structural areas which have elements of a slow (Adagio) introduction, a violent march-like section (Allegro), a lyrical Andante (which later becomes an Adagio) and a scherzando section in 6/8 time (Vivace). This is not something one often encounters in Sawyers’s symphonies and concertos, in which most movements are in a single tempo and metre. However, Sawyers has managed to achieve a high degree of motivic and thematic interconnection between the various sections, and the transitions between sections are imaginative and fascinating.

The work opens pianissimo with the note C spread across five octaves. The first hint of melodic activity is a falling semitone from C-B in the second violins in the second bar, followed by two more. Both the single semitone, and the descending chromatic scale will prove to be crucially important ideas in the work. Within just a few bars, we are introduced to Sawyers’s polytonal “splashes of colour” and the theme based on Kandinsky’s Composition IV. We also hear a portentous rising theme which starts like a minor scale, then ascends in fourths. With surprising speed in such slow music, we’ve already heard much of the thematic material for the work by the time the low brass enter with the first fortissimo which heralds the breakthrough into the march-like Allegro.

The Allegro couldn’t be much farther from the Adagio in tempo, texture and mood, but it is closely thematically linked to what we’ve just heard. The strings attack the rising theme, now fast and fortissimo, as the horns take authoritative control of the descending chromatic line first heard in the second violins. The triadic splashes of colour explode with new vehemence in the winds, and the low strings and low brass attack the Composition IV theme. Once one notices these connections, it’s apparent that there is an element of both variation technique and motivic development which threads its way through the disparate sections.

This first storm is short-lived and sound dissipates into a lyrical Andante episode built around a long-breathed melody first heard in the cor anglais and later played in canon by the violins. Here the accompanimental figures are particularly telling – the rising and falling semitones in the violins under the cor anglais theme form an important connection with the work’s opening, while the rising octaves in the horns offer a significant foreshadowing of what is to come.

The march-like Allegro soon returns with new ferocity, with the trumpets and trombones in the foreground, and the strings exchange volleys of highly-chromatic quavers and semiquavers in which the second voice is a “crab” (or retrograde) of the first. It quickly melds into a brief waltz and then a second Andante, in which a melancholy four-bar theme i developed through a sequence of varied Bach-ian chorale settings.

Finally, we have the first occurrence of the scherzando music in 6/8, which emerges from the Andante which precedes it through a sequence of falling semitones like those which opened the work. Here again, the main theme is the one which we heard in the waltz, with additional significance given to the falling semitone motif. This first 6/8 section can be seen as the “end of the beginning”, functioning a bit like the conclusion of the exposition with the next march section marking the beginning of a long, intense development. However, it’s worth underlining that while the work has strong elements of sonata form which are highlighted by the recurrence of the music of the opening at key structural moments, it doesn’t aspire to the kind of formal closure one looks for in a Beethoven symphony, but instead moves inexorably towards a dramatic culmination.

Further detailed explanations of the musical journey are probably not needed, but it is worth pointing out that the soaring slow melody first heard in the oboe and later, at the climax of the whole work in the violins, is actually a rhythmic expansion of the waltz theme. One is also advised to see how the rising octaves first heard in the horns achieve ever more significance – this theme is further developed in the slow movement of Sawyers’s Third Symphony and his Violin Concerto, and even appears in the finale of his Fourth Symphony. And it is worth listening out for the constant significance of the falling “sighing” semitone and the descending chromatic scale.

The work ends with a long, intense Adagio, which builds from a final re-appearance of the opening to a huge C major chord, fff, in the brass. There follows one last pianissimo statement of the slow oboe melody in the violins, this time stretched out almost to the point of timelessness, winding down until all that’s left is the falling semitone from A-flat to G in the violins then the oboe, before one last fortissimo outburst as all of those “colour” triads appear at the same time:

In fact, right at the end of the piece all the colours are almost hurled at the canvas at once and as, ‘the paint dries,’ colours disappear until only pure tones are left – in this case a warm pianissimo C major chord.

Hommage to Kandinsky will be released on CD, streaming and download by Nimbus Alliance on 5 June 2020. 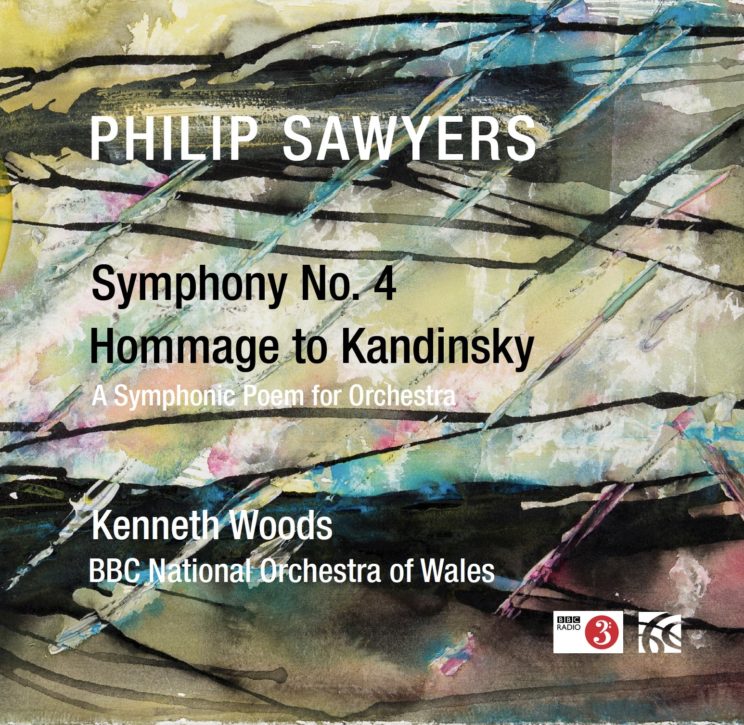