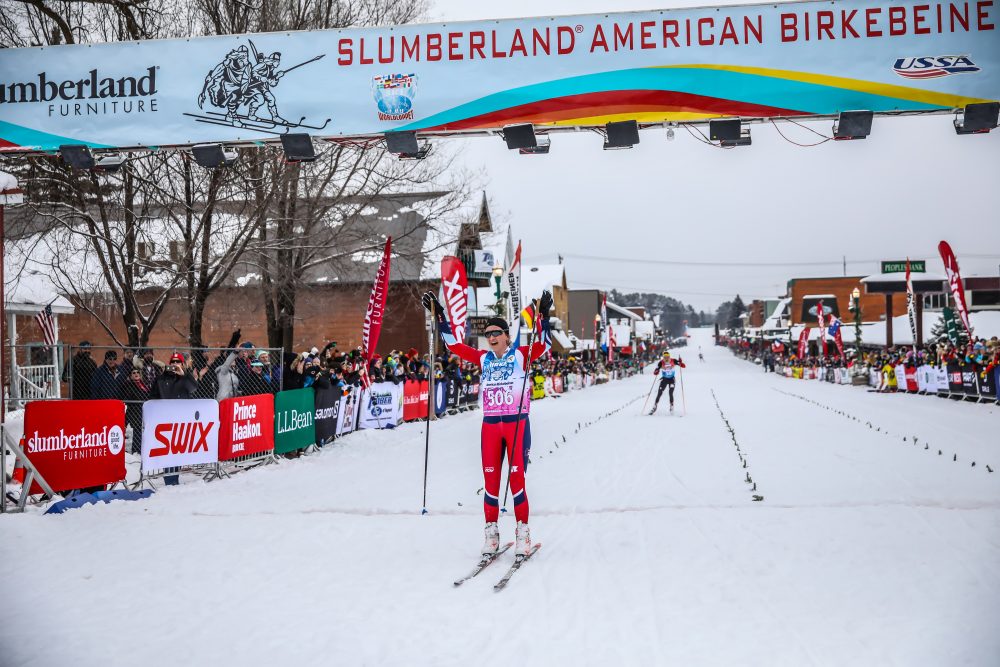 Falling snow. Not too frigid temps. And a layer of fresh snow overlaying the 50 kilometers of undulating terrain for the 2019 American Birkebeiner. Perhaps no matter the conditions, it is cross-country ski racing paradise. The event marks a gathering of nordic skiers from across the continent there to partake in an event boasting serious on-the-verge-of-leg-cramp racing and a double dose of Wisconsin culture. Norwegian sweaters and Birkebeiner chotschi aside, the famed point to point race defines head to head tactics and fitness.

Amidst the infamous trail lined with deciduous trees that eventually opens up onto Lake Hayward in the event’s closing kilometers – the 50 k skate saw a new winner in the elite men’s and women’s categories.

In her first year training full time after graduating from the University of Vermont last spring, twenty-two-year-old Alayna Sonnesyn took the overall win in the women’s race. Sonnesyn now trains fulltime with the SMS T2 based at the Stratton Mountain School in Vermont.

But she is to the bone Midwest and understands the import of the win.

“There is definitely so much excitement and enthusiasm in the state of Wisconsin right now for this race and so it is pretty cool to be a part of it,” Sonnesyn said in call after her win. “This was my first time racing up Main Street and to hear those thousands of people cheering was pretty unforgettable and my whole body kind of went numb when I heard that. It is amazing to be part of an event that has so much passion and love for this sport. It was pretty fun.”

For those not partaking in the event but wanting to know how each k went down for the winner. Where the screws were turned. Where the skis felt silky. Where they felt like the wax tech corked in a top coat of 40 grit sandpaper.

In Sonnesyn’s exuberant retelling, the 10 k to go mark was the ah-hah. Until then, a foursome of skiers had broken away to make the elite selection of the elite wave: APU’s Becca Rorabaugh, Katie Feldman (SVSEF Gold Team), Anja Gruber (Salomon), and Sonnesyn. In the midst of the 10 k and 9 k markers, Rorabaugh began to peel little by little off the back. The three remaining skiers kept the strong pull going to separate themselves.

“Anja, Katie and I were definitely picking up the pace and really working hard,” Sonnesyn said. “And I had been taking plenty of feeds the entire race and I still felt really energetic. My muscles were definitely getting pretty tired. but I still felt like I had a lot in me.”

As the k’s began to click past, Sonnesyn passed over route 77 where she took another feed.

“As soon as I crossed 77 I just felt this jolt of energy,” said Sonnesyn. “I think from a coke feed that I got or from some of the cheering there and also just realizing that I have got 5 K left. If I want to go I have got to go.” 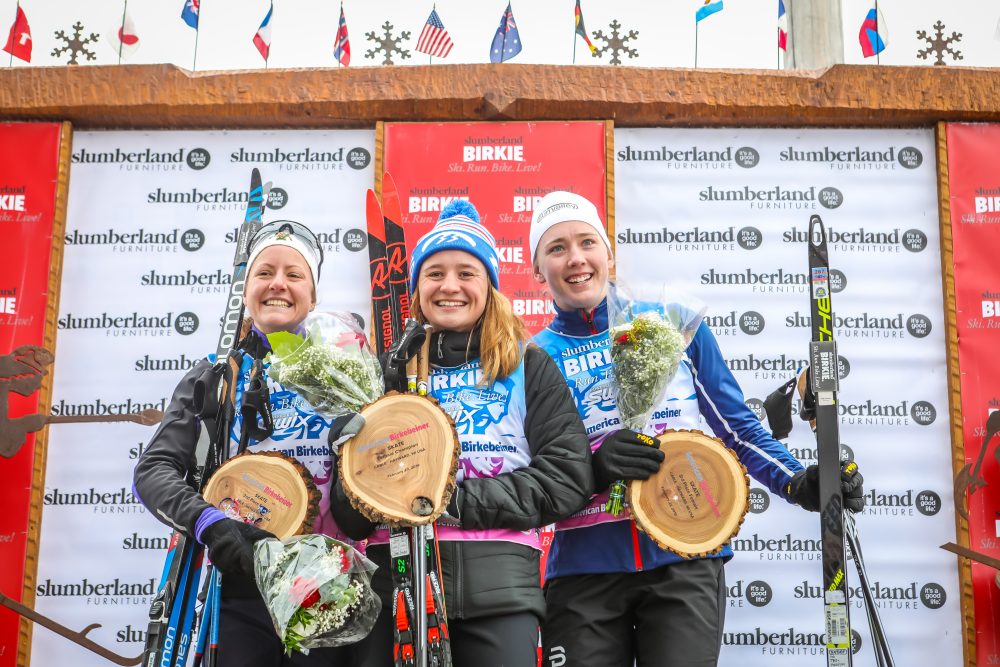 In a race like the American Birkie, the mental stamina to stay in it can rattle some and embolden others. With so many K’s to ski, it always seems safe to wait. Wait until a bit closer to the finish to make a move. With 50,000 meters to race, late can never seem too late. That is until the opportunity is abruptly snagged away.

“I thought in the back of my mind, ‘you know I could go for it here and win or I could just be patient and maybe not even make the podium,’” she said. “To me, I thought it was worth it to go for it and take that risk and take the chance to break away.”

The moment was for real. A groomed Hayward main street. A cacophony of cheers. And Sonnesyn, alone amongst her elite wave peers, won in a time of 2:34:01 hours.

“I did keep looking across my shoulder but once I got onto Main Street up and over that bridge it was surreal. All the cheering just hit like my entire body went numb. I was overcome with emotion and definitely by the time I crossed the finish line and realized I had actually done it I broke down.” 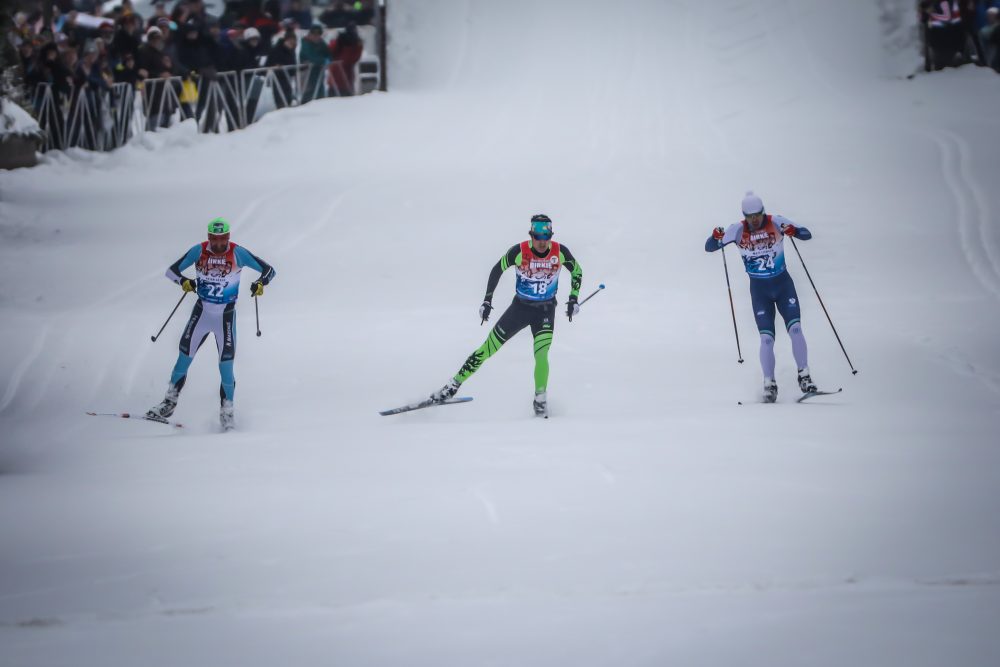 Phonetically, it is a unique name, but a simple one. Say it: “Ahh-key-oh” … Akeo. The first name has Marshall Island roots, the last name possess a Euro core. It’s Akeo Maifeld-Carucci.

But let’s dial the time machine back a bit and be a bit less formal and go with the first name. Akeo skied at Harvard, then spent stints training in Bozeman (his hometown) and Bend before settling in with the Craftsbury Green Racing Project last June.

He is a mechanical engineer. As much as he is an endurance junkie, he is a fastidious analyzer. Not a bad trait in the world of design and build, but on the race course, analyzing can help only to a point. On some occasions, the over-analysis can see the make-your-move-moment lost.

“We were at Double OO, which is 28 k from the finish or so is when Brian Gregg really put in a move,” Maifeld-Carucci said in a phone call. “There is a prime there and he went for the prime. And there is this hard gradual uphill section right after the prime and he maintained, he put a gap on us. No one really chased him and he maintained that gap for a little bit and I was like, ‘Brian is really strong we should probably try and close down on that’. So I just went to the front. Closed down. Then I looked back and saw that Matt Liebsch was on me. So it was the three of us and we had maybe a twenty-meter gap back to the rest of the pack.”

Closing the gap right then and there was the first of several clinching moves. The analysis worked. It was Maifeld-Carucci and two of the American Birkebeiner’s most knowledgeable elders in Liebsch and Gregg. As the trio raced on, according to Maifeld-Carucci, Liebsch went to the front and stated this was the time to separate from the chase.

“And I was sitting there and thinking ‘well, there is a little downhill after this and usually, it is really early to go and usually the pack can close on that downhill stretch because they move faster,’” Maifeld-Carucci said as he reflected on a moment of doubt. “I had heard a couple of guys before the start saying, ‘oh a break at OO never lasts, people always close it on the k-and-a-half of rolling downhill after that. The pack moves faster on that downhill stretch so the gap never lasts at OO.’”

The real-time analysis at OO made Maifeld-Carucci hesitate.

“I was nervous but then when they said, ‘I think we can make it’ and I knew Matt and Gregg are strong and they know the course really well, so I was considering that,” said Maifeld-Carucci.

Considering. Computing. Sensing the energy reserves and the stamina left in his legs. Again, like closing down Gregg’s pulse, Maifeld-Carucci’s endurance calculus told him to trust in Gregg, Liebsch, and himself. 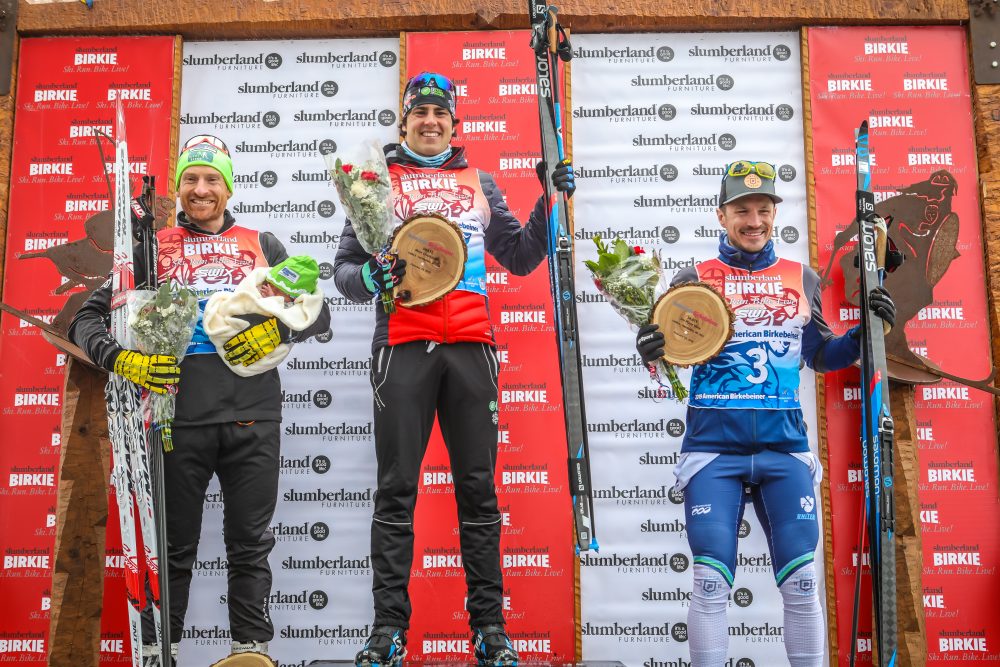 “It was nerve-wracking,” said Maifeld-Carucci. “I felt my legs starting to tighten up maybe on the edge of cramping even from 20 k out. So I was a little nervous about that, because you know that is a lot of race left. I was trying to flirt with the line of how fast I can go without pushing too hard and using too much power and making the legs cramp. I was dealing with that and it only got worse.”

But not bad enough. Across the lake, and over the American Birkebeiner International Bridge with 400 meters to go the sprint was almost on. Not before the path to victory was thoroughly analyzed did his motor truly rev.

“We dropped into the finishing stretch, 400 meters of just straight away gradual uphill and I kept telling myself, ‘’you don’t want to lead and you don’t want to go too early.’ I was trying to wait. But the crowd was so loud and so explosive I just couldn’t wait any longer I saw the finish line, felt the noise and I was like ‘screw that, we have got to go.’”