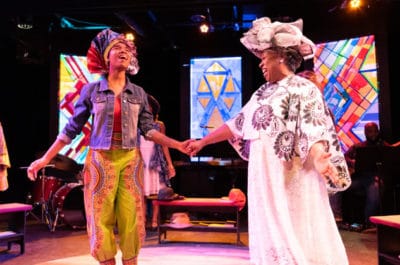 Ladies—dig out your hat boxes, Crowns is back in town!  The production at Creative Cauldron is captivating and beautifully relays the meaning, messages, stories and significance of church ladies and their hats. The African ancestry underlying the adornment is highlighted with centerstage attention from the very opening sequence and the soulful rendition hits the mark along the entire journey. Crowns blends vignettes with musical interludes of hip-hop, spoken word, blues, gospel, jazz, and R&B to share the depth and meaning behind headgear, what hats meant to elder matrons and grandmothers, just a generation removed from slavery.

Yolanda (Kendall Airen Claxton) opens the show with a rap.  She’s a Brooklyn teen sent to live with her grandmother in South Carolina after her brother was murdered. Struggling to find her way, she slowly learns to appreciate the beauty, ceremony and symbolism of hats, or “crowns” from her grandmothers’ church-going community.

There is something powerful about the solidarity church women on a mission, or as the hymn says – “On the Battlefield for My Lord” indeed, and life.  Led by the venerable gospel matriarch TiaJuana Rountree as Mother Shaw, Marching to Zion, the women tell stories of their own pasts, losses, struggles, all while being resplendent in gorgeous hats.

Iyona Blake as Velma brings dramatic flair to her characters, can flash her eyes seductively or cast a menacing glance to stop a heathen in his tracks.  With gorgeous vocals that can shift from angelic to gutsy blues, her “Eye on the Sparrow” crests and soars to glory.

Kelli Blackwell as Mabel also lets loose with all of her numbers especially “Just a Closer Walk with Thee.”  Just when you thought you were in Mahalia Jackson territory, Music Director Cedric D. Lyles  and Co-Music Director/keyboardist Greg Watkins add a funky twist with their own original arrangements and – hold on to your hats – you have to resist the urge to run down the aisle like Mable does when “getting her praise on.”  Cameron Dashiell is charismatic and reliable as Wanda, while Eirin Stevenson shakes it up as a spry bundle of energy Jeanette with hip-thrusting moves and a mega-watt smile. Stephawn P. Stephens as “Man” is a versatile wonder, tall as a protective guardian angel, playful as a youngster, somber as Father and touching as the beloved slain brother, Teddy.

Yolanda is the theatrical heart of the story. Yolanda’s healing transformation is a heart wrenching crowd pleaser and her hurt is laced with a twinge of guilt about her brother’s murder weighing down her already unbearable grief.

From the start, Yolanda’s physique and posture reflect her state of mind, as she re-imagines her playful banter on the streets. With remarkably dramatic clarity, she transitions from kinetic and verbose to hesitant and sullen when shipped south, presumably to stay out of trouble and harm’s way.

Yolanda scowls with boredom and shuffles along with her Gram to church service, hunched over in the pew seemingly wanting be anywhere but there, while at the same time, peeping out, entranced by the stories.  It’s a tough dramatic contrast to accomplish, but Claxton has the theatrical chops to pull it off.  Yolanda listens to the church ladies share about their own lives, and their hats, while traversing the emotional landscape of her own sadness and grief.

Taylor’s script lurches around a bit and jerks with the nonlinear vignettes, but it’s like bouncing on a buggy wagon behind a team of horses, also sweetly portrayed in a scene.  In her quest for answers, Yolanda is actually on the road to her own healing and identity.  It’s a journey of self- discovery that slowly unfolds in front of us as she comes to grips with herself and her loss, surrounded by loving matrons adorned in their hats that we learn go far beyond just a fashion statement – they are testimonies of life and sisterhood.

Designers at Creative Cauldron wrap the production with love and respect from the beginning as seen in the opening incantation and attire steeped in African motifs, costumes and set design by the remarkable Margie Jervis. The women converge for church service in pert form-fitted white Chanel-looking suits (watch for stockings sporting black back seams, a nicely nuanced reflection of earlier times).  Yolanda’s baggy pants have East African designed patterns.  Her crowned gele headdress in the final scene is a work of art along with the other breathtaking costumes that could fit on an Ebony Fashion Fair Runway — coral blue peacock, colorful crests and hues across the rainbow, long flowing robes like the performers of Sweet Honey on the Rock before your eyes.  It’s an exhilarating tribute and homage to the legacy of sisters profiling in their hats.

The set’s colorfully crafted stained glass windows catch the lighting by Lynn Joslin and range from brilliant to subdued and everything in between. In one particularly tender moment, a father slowly backs away receding into one of the corners glowingly backlit in a touching farewell.

In less accomplished hands, Crowns could be an entertaining parody.  Co-directed by Kara Tameika-Watkins and Ian Anthony Coleman, with an accomplished cast and loving designers at the Cauldron, it’s a universal touching tribute to the resilience of the human heart.  Crowns is a rhapsody.  Don’t miss it.