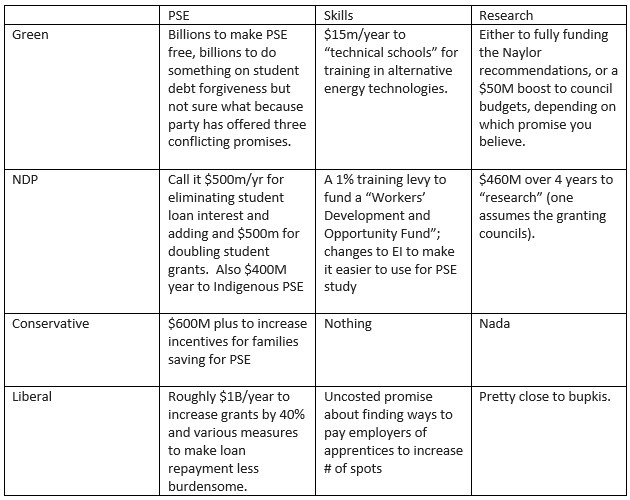 Ok, everyone.  We’re at the finish line.  Among the things we’ve looked at in preparation for this day are:

Two quick updates on things announced.  First, the Greens.  After my piece on the Greens, leader Elizabeth May announced a completely different third policy on student debt forgiveness, which would only forgive debt over $10,000, which did nothing to detract from her image as a serial pulling-things-out-of-her-posterior kind of person.

Also post-publication, the NDP did not announce a $500 million plan to increase student grants.  Didn’t mention it all.  Except in the party platform costing document they released with zero fanfare last Friday.  We have no details of how this money would be spent.  And who cares, right?  Because apparently, student aid is not a policy area where details matter, but is just a box to be checked and money thrown at for the purposes of making the party faithful feel “progressive”.  And same apparently on research – $80 million extra to the granting councils in 2020, with an extra $20m per year extra thereafter, escalating.  And an extra $400m or so for Indigenous post-secondary education. Oy.

With that, here’s a quick summary chart of the various party promises, which you can clip and save for poll-time.

Some of this stuff is good.  The failure of any party to really come to grips with research is a bit depressing, but as I’ve noted previously, most big research initiatives were never mentioned in manifestos before being implemented.  It’s simply not something that drives electoral competition, I guess.

But maybe what’s more important here is what the parties didn’t say: specifically, none of them said they were going to increase transfers to provinces.  Maybe that doesn’t matter because current policy is that the Canada Social Transfer, which is the vehicle for federal transfers, is growing at 3% per year and everyone feels this is sufficient.  But the plain fact of the matter is that for the last decade, provinces’ own-source contributions to institutions have been declining for a decade now.  Public support of institutions is eroding.  And the reaction of every federal political party is to throw money at anything except core funding.

Which tells me one thing: whatever happens today, the core dilemma of Canadian post-secondary education isn’t going away.  The long-term fiscal imbalance between provinces and the federal government is only going to get worse.  The level of government that funds institutions directly is under increasing financial pressure; the level of government with lots of room is the one that hands out money to students and niche programs.  The simple way to fix this would be new, higher transfers.  But based on what we saw in this election, I am not optimistic.

The post The 2019 Election: A Final View appeared first on HESA.