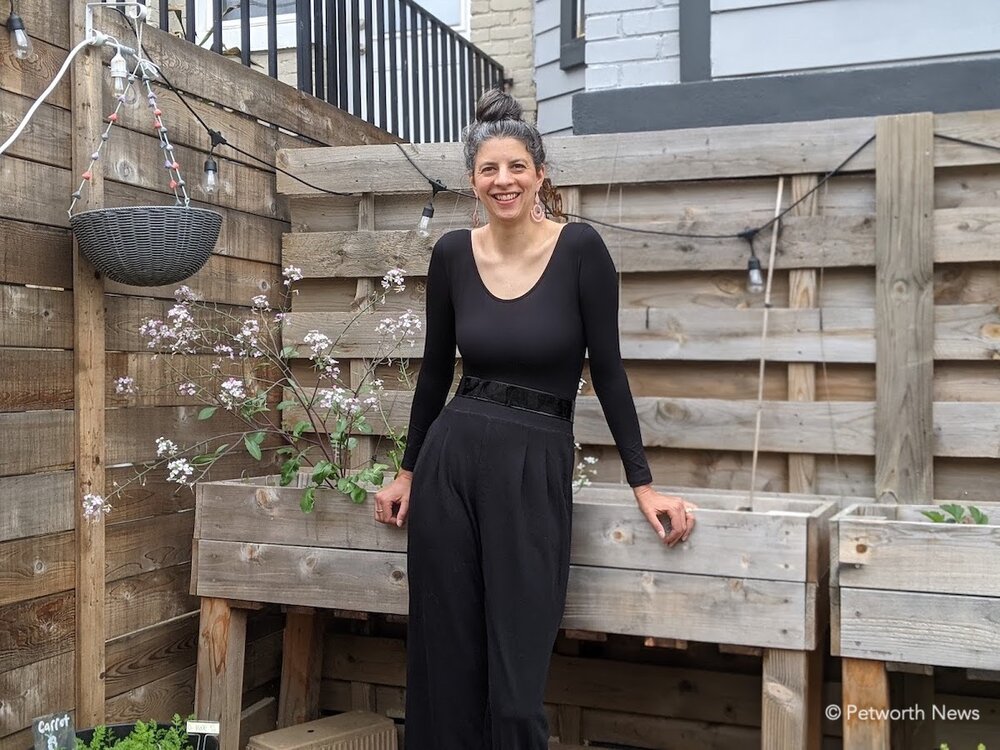 In 2019, I first heard of District BATCH and owner Marisa Martino through mutual friends who touted their natural deodorant as the best purchase that they had made that year. I checked it out later, and immediately became hooked on her deodorant and handmade soaps. I’ve given her stuff as gifts and recently brought her deodorant and soaps to a favorite things party.

Through my own curiosity and desire to promote local and sustainable businesses, I decided to reach out to Marisa, an eight-year resident of Park View, and find out more about her business.

While District Batch was officially launched in 2018, the origins of her business reach back nine years ago. At that time Marisa was getting into making aftershave for her now-husband to accommodate his sensitive skin, when her mother was diagnosed with Stage 3 breast cancer. She would accompany her mother to her chemotherapy sessions, and she noticed that in the cafeteria the food was served on Styrofoam plates. The gift shop carried skin care products containing ingredients that were known carcinogens. She was shocked about these choices made by a top cancer institute in the country and wanted to curate a natural skincare product line, free of carcinogens. Today, her mother is healthy, lives in DC, and is her biggest fan.

Marisa is a self-proclaimed “ingredient nerd” and rigorously researches the ingredients that she uses. She experiments with new ingredients and has fun sourcing ingredients for her products. Every product she offers started because she needed it. When she was nursing her daughter, she needed a deodorant that worked, but also was aware that her little nose was very close to her underarms. She worked on an all-natural formula she had been throwing around for years until she got it right. Her deodorant line became so popular that she expanded scents. (The deodorant line is the most popular, and if you return the glass jar, she will take it back, sterilize, reuse, and offer you a $1 credit towards your next purchase.)

As any small business owner would know, running a company is a lot of hard work and can be very scary. While Marisa definitely feels this, she also comes from a creative entrepreneurial family, so being a business owner feels natural to her. Also, as a woman-owned business, she finds excitement from the current support and focus on female entrepreneurs. However, her biggest pride is that her four-year-old daughter sees her work hard, sees that her mother runs her own company, and makes the decisions.

Marisa’s biggest surprise as a small-business owner was the growing pains from going from tiny to small. At the beginning she would buy 3-ounce essential oils, and now she often buys 11 pounds at a time. The things that didn’t surprise her were her connections to her customers. As a people person, she loves when people reach out to her with questions, and a smile hits her face every time when an order is placed.

She recently opened a zero-waste line, which came out of her passion to be more eco-conscious. Every year she makes one new resolution that is environmentally motivated. Over the years she has eliminated using plastic bags, paper towels, and drinking from water bottles. She knows that District BATCH is not going to solve the world’s disposable mindset problems, but it’s something that she can contribute to. She likes the idea that people buying from her company can be a no-brainer for like-minded eco-friendly consumers. She works every day to make better and more environmentally conscious choices, so when you support her company, you can support that lifestyle.

Marisa lives in Park View with her husband and 4-year-old daughter. Their favorites in the neighborhood include Call Your Mother, Tabla, and Odd Provisions. She loves the Petworth library, and what Julie is doing at Lulabelle’s and Willow on Upshur.

She also wants to tell the readers of Petworth News THANK YOU. There has been so much growth this past year even during COVID-19, and so much of that is from local sales.

Use the code PETWORTHNEWS10 for 10% of your first order and a free sample!