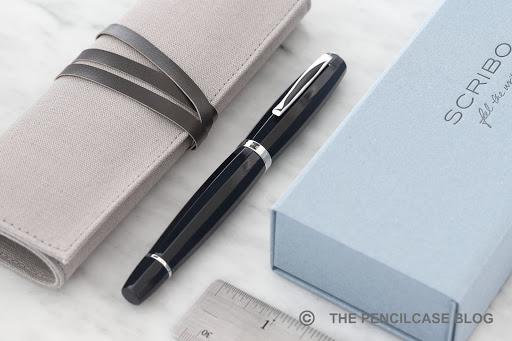 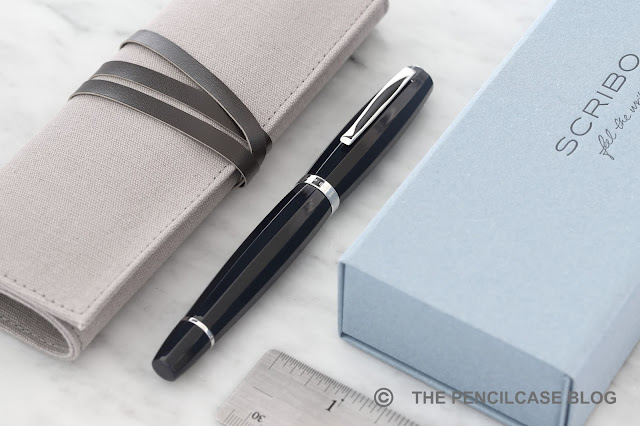 Omas has been dead and buried for 3 years already (can you believe it's been that long already?!), but brands like ASC and Scrittura Bolognese (Scribo) have since filled the void, so there's actually quite a few interesting things going on surrounding the iconic Italian brand. Closest to being an actual 'reincarnation' of Omas is Scribo, founded by ex-employees of the brand (I'd consider ASC to be more of an 'homage', if anything). Up until now, Scribo sort of went under the radar in building up towards their first 'real' production pen. In the meantime, they released two high-end limited editions, and a store-exclusive for Write Here in the UK (that I reviewed HERE).
But now they finally released their first production pen: the Scribo Feel! I had been talking with Luca -founder of Scribo- for a while already,  and he recently asked me if I wanted to take the Feel for a spin. Uhm...YES PLEASE!
I'm usually not one to spend too much time on packaging, but in this case I think it deserves some attention. The Feel comes packaged in an eye-catching baby-blue cardboard box that is very study yet not excessive. Inside, the pen is held in a pretty neat canvas/faux leather pen wrap (holds two pens and a polishing cloth). Paperwork comes packaged in a separate cardboard sleeve, and I also received a complementary bottle of 'Scribo'-branded blue-black ink (although I'm not sure if the ink is part of the retail presentation). I've seen a lot of packaging come and go, but painfully few brands realize that -no matter how excessive and ridiculously over the top- packaging is still packaging, and contributes relatively little to the overall experience of the pen after the initial 'unboxing'. While I certainly think presentation is important, I much prefer this simple but functional presentation over a massive wooden box that I has to be stowed away somewhere in between the trillion other useless boxes. 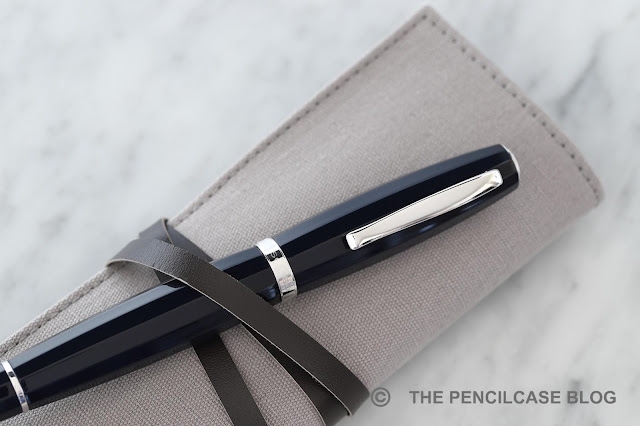 When I first saw product shots of the Feel, my initial thoughts were something along the lines of: 'Well... [cough]... that's an interesting pen.' It's a rather bold design (both figuratively and literally!) inspired by Doric columns, but it works surprisingly well in person. The design is a bit out there, and at the same time it's executed in a way that it looks quite understated. I very much came to appreciate the aesthetic having held it in person. It's a large, bulky pen with a strongly bulbous shape on both cap and barrel. The entire pen has a dodecagonal (12-sided) profile. 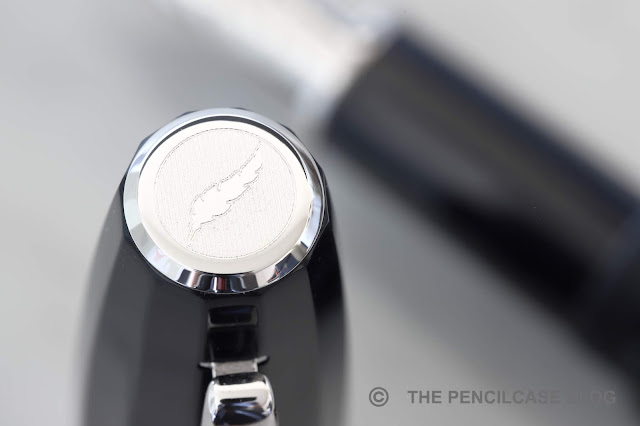 'It looks like it ate too much", was Ed's (as in: Ed Jelley) first reaction when I showed it to him. And that may be about the most apt description I've heard so far. Despite the unusual shape, it's actually quite simple in appearance with very little decorative details. The clip has a slight curvature to it, but is otherwise very simple. The center band and cap finial are both rhodium-plated metal and are very lightly engraved. The engraving is tasteful, but it could've stood out a bit more IMHO (I really like the quill logo on the cap, but it doesn't really stand out). This is really a pen you'll want to see in person, as pictures (at least in my opinion) didn't really do it justice. It's stately, but elegant because of its curvy shape. Is it the best-looking pen out there? Maybe not, but it certainly didn't polarize me as much as I anticipated it would.
Maybe the daring shape of the pen is also why they kept the material options quite simple. A lot of people will probably be disappointed by the lack of extravagant celluloid and colorful resins that Omas used to be known for, instead Scribo let the design of the pen speak for itself with two understated blue resins (blue certainly seems to be the theme here!). The opaque dark blue with rhodium trim is plain, and appears almost black in low light and in pictures. The light blue/grey version with ruthenium trim is perhaps a bit more out there, but it's still a fairly subtle resin pen and the dark trim looks understated. 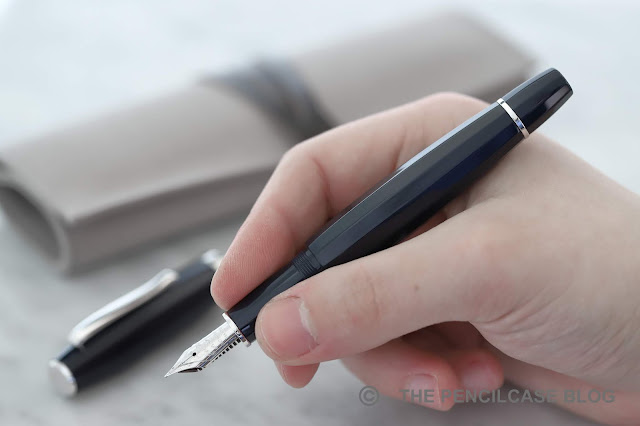 The Feel is a stately pen. It's meant to be Scribo's flagship model, and it's definitely sized accordingly. It's 14.8 cm (5.83") long, and 17 mm (0.67") wide at the 'fattest' point. With an uncapped length of 13.3 cm (5.25") it's large, and it better be because the cap can't be posted. The bulbous shape makes the entire pen appear very wide, but it narrows down considerably towards the middle of the pen and the section, which is a comfortable 11-12 mm (0.47") in diameter. The all-resin construction weighs in at a solid but comfortable 36.7 g total. Most of the weight is in the cap, so it's large but balanced in the hand. 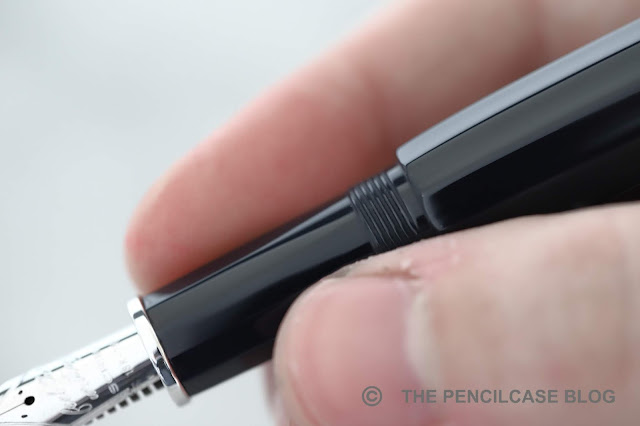 Uncapping the pen, you'll notice that the walls of the cap are quite thick, and thus there's quite a step from barrel to section. It's quite noticeable when you hold the pen, but the curved barrel somewhat helps 'masking' the transition to the section. The section is also made from resin and features the same dodecagonal profile to match the rest of the pen. The section is long enough to hold comfortably and the threads are quite unobtrusive.
The nib -I said it before, and I'll say it again here- is right on the money! The Scribo nibs are made with custom tools specifically and exclusively made for Omas. Scribo bought those tools during Omas' liquidation. Hence, they are now capable of making their own nibs, identical in specifications to the Omas ones. 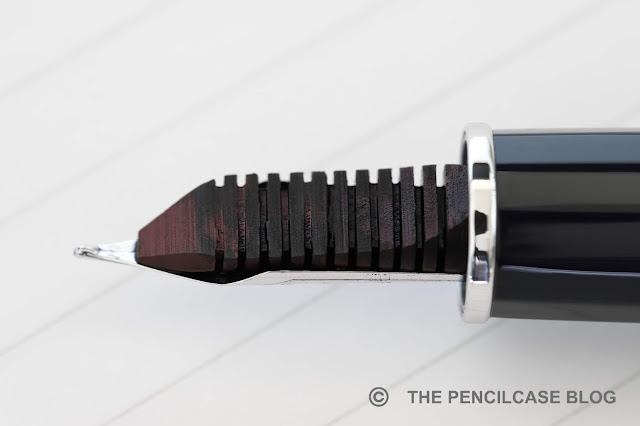 And I'm glad to say they didn't change anything, apart from the engraving design of course. Of the three Scribo nibs I've used so far, all of them have been nothing short of perfect. The ebonite feed provides a wet (WET!) flow, and keeps up well. The nib is buttery smooth, but surprisingly responsive considering just how smooth it is. It starts right up when it hits the page (even after not being used for a while) and hasn't skipped on me once. The 18k 'non-flex' nib (here in medium) has a nice bounce to it while you write, but if you want a moderate amount of line variation, there is also a 14k 'flexible' version (available in all four line widths, EF-F-M-B).
The Feel has a piston-filling mechanism that holds about 1.5 ml of ink. To be honest, my only real gripe with this pen is that it lacks an ink window. Especially considering how wet this nib writes, I found myself refilling it quite often and there's no way of knowing how much ink is left. A minor nuisance in all, but worth mentioning if you do a lot of writing. 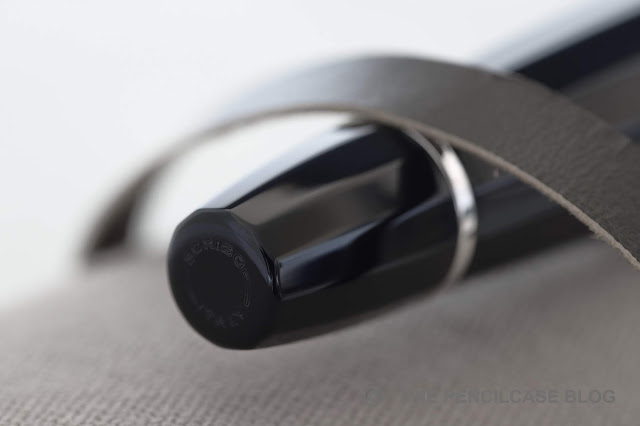 To be honest, the Scribo Feel probably wouldn't be my first choice when I'd walk into a pen shop. Yet having had one on my desk for the past couple weeks, I found myself quite drawn to it. It's different, a bit our there design-wise, but at the same time it's quite subtle. If anything, the design is a pleasant change from the usual 'thirteen in a dozen cigar-shaped pen with gold trim', and maybe that's a good thing. Is it worth the MSRP of 650€? That's a tough question. The Omas-quality nibs are a huge plus in my book, but of course it's quite a lump sum of money to put down if you really don't like the design. Ideally, I would've liked to have seen it in the 550-600€ range.
Remember how at the beginning of this review, I said Scribo is the 'reincarnation' of Omas? Maybe I should reconsider on that. How I see it, there were two scenarios for Scribo: either they completely followed in the footsteps of Omas and kept true to the old Omas designs. Or they went a completely different route to develop their own brand identity. While the first one would've definitely been the easiest to resonate with Omas enthusiasts and gain a following, I'd say they went with option two with the Scribo Feel. They are clearly putting in the effort to differentiate, while still building on their knowledge and expertise from Omas. With the Feel, they definitely show that they can think out of the box, so I look forward to what they can bring in the future!

This product was provided on loan by Scrittura Bolognese, so I could write this review. I was in no way influenced in the making of this review, the opinions shared in this review are completely my own! This post does not contain affiliate links. 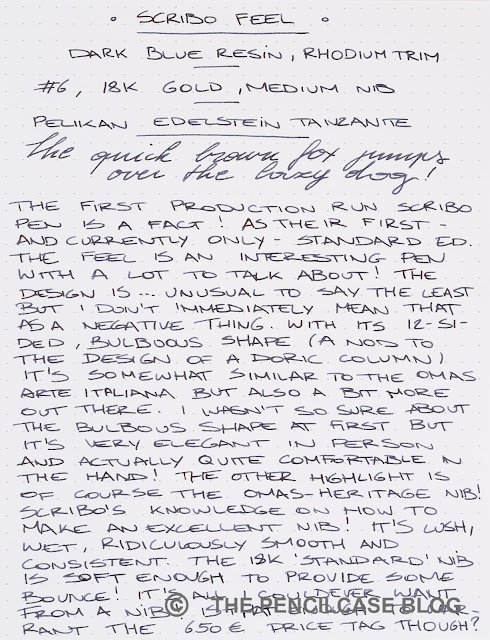