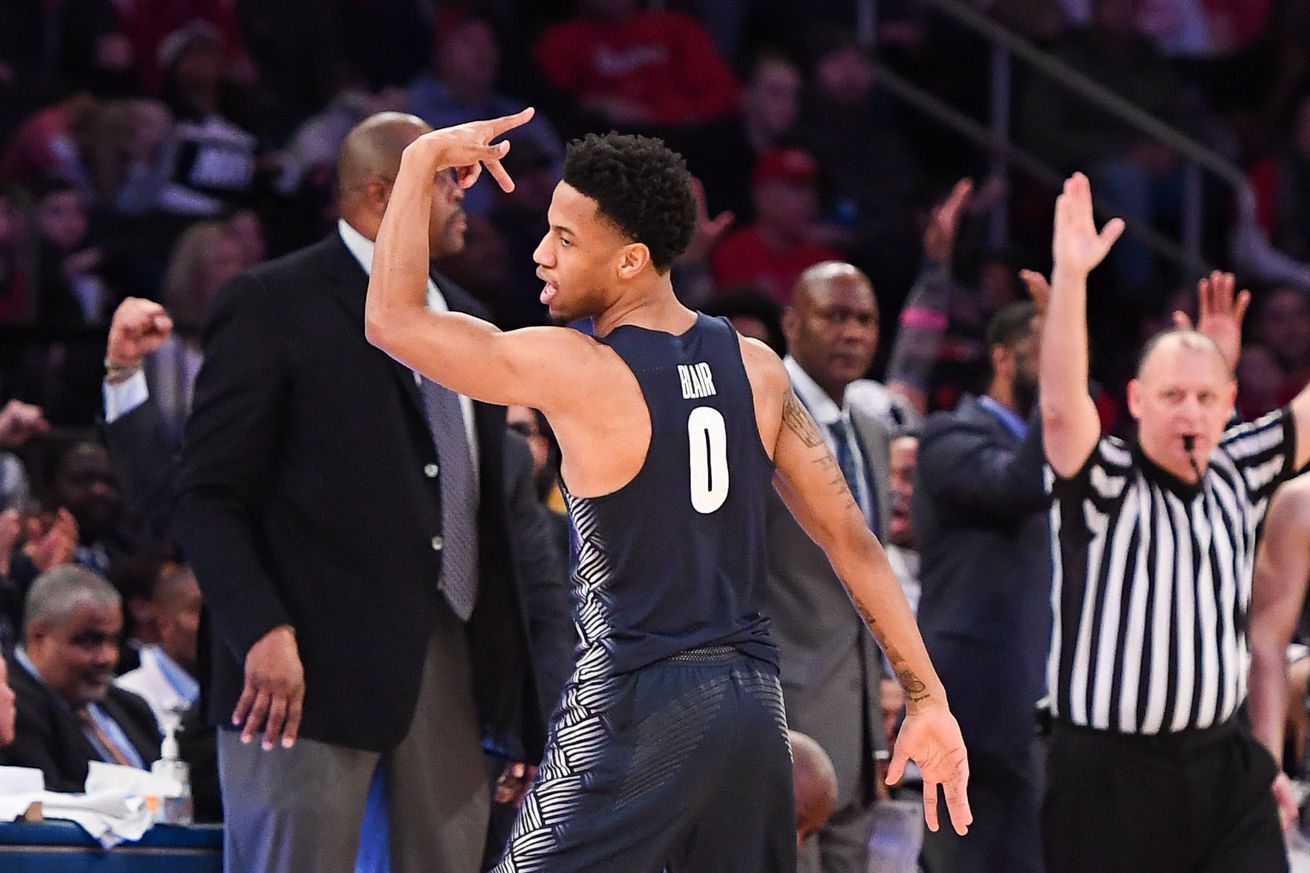 Whiplash: Hoyas get buried by Bluejays, 82-69

Jahvon Blair was the bright spot in the blizzard, dropping 16 2nd-half points

Coming off of Wednesday’s suprising win, your Georgetown Hoyas could not keep the momentum alive, falling 82-69 to the Creighton Bluejays in a game that was riddled with miscues and questionable strategic decisions. There is no single factor or individual to which the performance-related shortcomings can be attributed. Instead, roster-wide difficulty with shot & pass selection combined with inability to neutralize the Jays’ notoriously lethal offense in their home arena, yielding this season sweep.

The only Georgetown players in double digits came off the bench, with Greg Malinowski draining four 3-pointers (as well as dishing out four assists) and Jahvon Blair—providing an unsubtle reminder of how he was an all-BIG EAST freshman selection last year—scoring 16 in the second half alone. Jessie Govan scored 9 points, but he was unable to assert himself as he had against Villanova and was once again struggling to match the mobility of Martin Krampelj on defense.

From the opening tipoff, the ball got swatted directly out of bounds. That should have been an indication as to how this game was going to unfold. Creighton got on the board first and out to an 8-0 lead, thanks to triples from Davion Mintz and Mitch Ballock, but the Jays also committed seven turnovers in the first 10 minutes, many of them largely unforced. The Hoyas did not score until the 17:00 mark, when Josh LeBlanc’s third attempt at tipping in the same shot was finally successful. Georgetown was consistently trying to get the ball into Jamorko Pickett’s hands to capitalize on a coverage mismatch, but he could not convert and finished the day scoreless.

After a media break where Patrick Ewing implored his team to, “Calm down...take [their] time and move the ball,” the Hoyas appeared to regroup. Malinowski knocked down a three and then forced a turnover at the other end, which James Akinjo turned into an easy layup. Trey Mourning hit two soft jumpers and even blocked a shot from Krampelj. When Jessie Govan got the roll on a tough three off the glass, Marcus Zegarowski missed his attempt and Malinowski hit yet another triple, the Hoyas took a 22-21 lead into the under-8 media break. It would be their only lead of the contest, and it was short-lived.

While Georgetown’s offense stalled, the Jays went on a 10-0 run. Ty-Shon Alexander, who had torched the Hoyas in the season’s first meeting, navigated around LeBlanc. Kaleb Joseph hit a transition three on his way to a season-high 18 points off the bench for Creighton. A few flashes of coordination facilitated a 6-point swing and gave Georgetown hope late in the first half. Govan ran hard up the court when Pickett pulled down a long rebound and was able to finish easily. Kaleb Johnson was playing hard, diving for a loose ball to direct into Akinjo’s hands for a trey, then lining up beside Jagan Mosely to help draw the charge call against Alexander. Heading into the intermission, Creighton was up 40-34 after a period of basketball in which 5-7 possessions regularly occurred without either team scoring and wherein not one single freethrow was attempted.

When your opponent is shooting in the neighborhood of 60% while you are shooting closer to 40%, it is unlikely that you will win the game. The level of play was disappointing and needlessly tough passes made it more difficult for the Hoyas to chip away at the Jays’ lead, but the basic math was also not in their favor. Jahvon Blair tried to singlehandedly keep his team in the game, shooting like he doesn’t believe he could miss and tallying 16 points in the final 20 minutes. Mourning seemed to shoot every time he touched the ball as well, with success from within 6-8’ and markedly less desirable results when outside the arc.

Georgetown was briefly able to cut the deficit to single digits when Govan bodied up to Damien Jefferson in the paint and finished. However, their frustrating inability to make Creighton pay for any mistakes doomed them to defeat. By far the prettiest play of the latter half came when Mosely drove hard towards the basket, drew two defenders, then slipped a last second pass to Kaleb who popped it in.

Jagan Mosely serves up the to Kaleb Johnson! @GeorgetownHoops looking for Hoya Magic in Omaha on @CBBONFOX. pic.twitter.com/YRWUGIHveh

What was missing from today’s game? It might be more appropriate to ask who was absent. The freshman trio of Mac McClung, James Akinjo and Josh LeBlanc each played 25 minutes or less, well below their season averages. Also not living up to expectations were the stat sheet contributions of the backcourt duo, with LeBlanc making ball-handling errors and Mac & James scoring fewer points than fans have come to expect. Part of this shortfall was due to Coach Ewing’s decision to bench them for significant stretches, particularly in the second half. Their absence from the court could have been a tactical decision based both on saving their legs from the rapid pace of play or as a disapproving response to some questionable long shots, but regardless, tomorrow’s leaders were not there today. (Ed. Note: Credit where it’s due - Akinjo managed to notch 8 assists in a limited time frame.)

With this afternoon’s result, the Hoyas are now 6-9 in conference play and 16-11 overall, and the bubble talk may quiet. The team will have plenty of time to think about what went wrong in this one, as a blizzard is bearing down on Omaha and there is probably not much else to do on a snowy night in February when trapped at an airport (or hotel) in the midwest. Whenever they do get to leave Nebraska, Georgetown has a home game against DePaul to look foward to.

That one is coming up on Wednesday (2/27) at 7pm from Capital One Arena, and will be airing live on CBSSN. For now, cheer on that meteor to strike the court at the Carrier Dome sometime between 6-8pm.

Whiplash: Hoyas get buried by Bluejays, 82-69