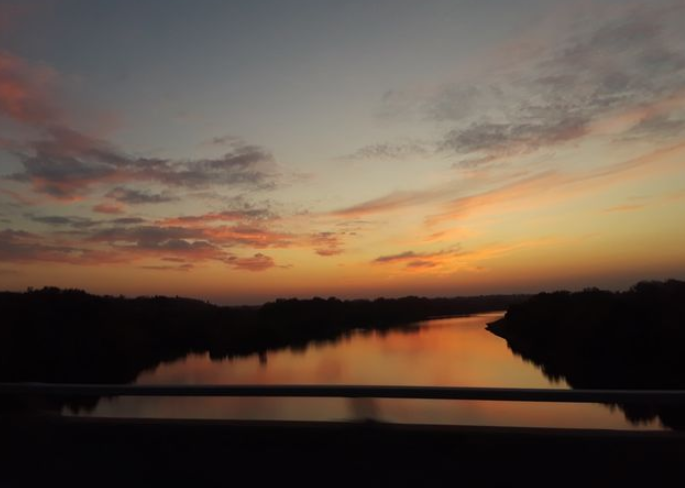 Happy Wednesday...I'm back today after having a few days off. Didn't really do anything aside from a few things around the house and played a bit of golf. The weather was wonderful and the lack of rain continues to be a thing. There are going to be some chances down the road, but despite the temperatures going all over the place there aren't any big storms showing up quite yet but there may be "players on the field" for something down the road.

Those players are mostly more extreme air masses setting up. This is the time of the year where Canada starts getting colder and colder...in part due to less daylight...and the southern US stays warm>hot. As the boundaries push against each other...things get a bit more interesting.

Today: Partly cloudy and windy...gusts to 30+ MPH likely as the day moves along. Warm with high highs in the lower>mid 80s

Tomorrow: Mostly sunny and blustery with highs only around 60°

Up and down we go...today and Saturday we go up.

Sunday...probably down to some extent...although things may get a bit more tricky by then.

The cause...numerous and seasonably strong cold fronts. Cold fronts are typically associated with SW winds ahead of the front...and N or NW winds behind the front. You're taking one air mass and replacing it with another air mass.

The connection of that 2nd air mass to colder air from Canada goes a long way in determining how chilly we get around here.

Goodness knows we can be cold, even in October...remember last October...it snowed 3/4 days at the end of the month I think. The October before that we had some flakes as well during the middle of the month...so things can happen around here.

The first thing is the warm-up today and the wind ahead of the front. The front right now is still up in the upper Midwest...

It will come through the area early this evening. The winds ahead of the front will crank away before subsiding just a bit later this afternoon.

Behind the front the winds will be busy, except more from the north or northwest...and that will usher in some chillier (but seasonable) air into the aree.

There won't be much precip with this transition...if any. Dew points are in the 45-50° range from here southwards...so there isn't much for the front to work with. There may be a few light showers towards northern MO tonight...but at this point not a lot is expected. Perhaps a few light showers/sprinkles early tomorrow from the clouds.

Then tomorrow and Friday will be chillier...breezy as well tomorrow adding a bit of a bite to the air as well. There may be some areas of frost up north as well.

We then try and do the whole thing again on Saturday with a windy warm-up expected...back to around 80 or so before dropping on Sunday. The Sunday drop is not being handled well by the models at this point. Yes there will be a cold front coming through but there are issues with just how cold that front will be...will it be another 20-25° drop type front or not? Take a look at the GFS...

and this from the EURO..

Some of the EURO data is even warmer...

Ensemble data from both models support each other so not a lot of help there. There are some subtle differences aloft though with a wave moving across the northern Plains and where its located. IF the wave is slower and weaker...the cold air push with the initial front on Sunday is weak...if stronger...like the GFS is showing ...it's a bigger push of colder air. I'm not sold on either solution so at this point I'd say a compromise is probably best.

I will say though that the push of cold air sometimes is over estimated in these early season fronts I think...so I think the GFS is a bit on the extreme side of things.

There should be a good and stronger push of chilly air at some point next week...although with the air masses battling out for a few days next week...it's going to lead to a lot of forecast changes I think for the next week ahead. Just be aware of this.

Hopefully at some point we get some meaningful rain...although that may wait another week or so.

The feature photo of the day is from Jean Nemerowsky