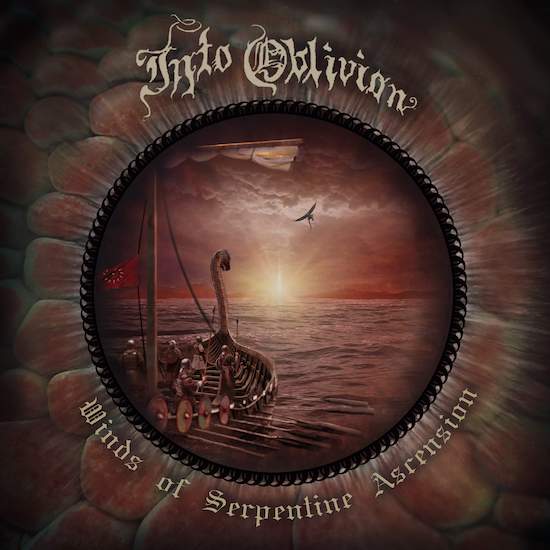 AN NCS PREMIERE: INTO OBLIVION — “EAGLE OF THE SERPENT SUN”

Winds of Serpentine Ascension is the title of a new EP by the Toronto band Into Oblivion, and we’ll call it an EP because its tracklist is just three songs long — although they collectively amount to 35 minutes of music. The first two tracks, “Where Winds Wail and Gnaw” and “The Shattering Ascent” are longer than average, both of them falling between seven and eight minutes in length, but they lead up to a truly extravagant musical odyssey in “Eagle of the Serpent Sun“. That song, which we’re presenting today in advance of the EP’s September 29 release by Hessian Firm, is almost 20 minutes long.

The song is an odyssey in more than duration alone. As the band lead us through the richly varying movements of the song and its dramatic range of instrumentation and moods, it really does seem that we have embarked on a harrowing and heart-breaking journey, one that may only end in death for all concerned. And not only because of the EP’s cover art, it seems like the narrative of a warrior’s journey that crosses the sea and hostile lands. 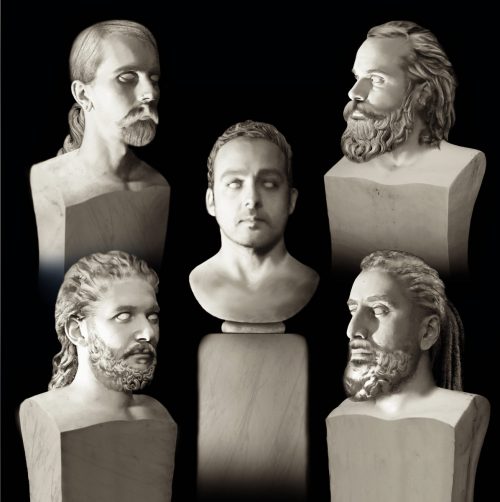 To be clear, this is just one writer’s interpretation. I don’t have the lyrics or inside insights into the band’s inspirations or conceptual framework. But whatever lies behind the creation of the song, its effect is deeply immersive and profoundly moving. Rather than a chore to get through, it’s so involving that the temptation to experience it again is immediate.

Stylistically, Into Oblivion draw together ingredients of black metal, death metal, and folk music. But don’t get the idea from the EP artwork or what I’ve written so far that this is some kind of cheesy Viking metal made of big riffs, war-drum cliches, “heroic” vocals, and flimsily constructed atmosphere. It’s far less manipulative than that, and far more intricate and intense. It demands more of your attention, and respects and rewards that attention. Its darkness is genuine, and powerful.

The ages-old acoustic instrumentation and the old folk resonances in the song are key parts of its allure, and the band present those ingredients before anything else, opening the track with gloomy acoustic-guitar strumming. The thump of an ancient drum, greater liveliness in the picking, and the electric effect of fiddles adds vibrancy to the mood, and you can also imagine the rhythmic sweep of longboat oars, but it’s still a mournful prelude.

With a crash of lightning the song dramatically transforms, rushing ahead with rumbling thunder in the low end, a blasting snare, and surging swaths of hostile, vibrating chords. The vocals let loose cauterizing shrieks and monstrous roars. And although the fiddles and the acoustic guitars surface again, the overarching mood is one of seething cruelty and charging menace.

The bass punches, the fiddling becomes a feverish inferno, and the buzzing riffage mutates into a more blood-crazed sound, but the intensity seems to ebb. Yet although the drum tempo slows, there’s still menace in the hammering of the bass and madness in the wild fiddling, which drives the music toward a new zenith of derangement and eventually another warlike assault of battering percussion and deep, grinding fretwork. The whirring harmonies have a dissonant tone that seems to channel flailing anguish and desperation.

The band then introduce another digression, one made of weeping violin melody and darting acoustic guitar, and a backdrop that sounds like an approaching storm at sea. Eventually, the acoustic guitar melody and the sound of waves are all we hear — but those lead into a momentous stomp of heavy chords and pounding timpani, joined by a bird-like flurry of wittering electronics (!) that becomes cacophonous. The acoustic strumming remains measured, but a tremolo’d lead creates a gripping impression that seems… beseeching.

The violins rise, and their sound cascades in grand, heart-wrenching waves. It’s a mesmerizing but painfully sad conclusion to what really is a stunning musical odyssey.

As noted at the outset, Hessian Firm will release Winds of Serpentine Ascension on September 29th, in a CD edition. Below you’ll also have a chance to listen to the previously premiered opening track, “Where Winds Wail and Gnaw” — a much shorter track than the one we’re presenting (“only” seven-and-a-half minutes long), but an arresting experience in its own right and one you shouldn’t miss.

The post AN NCS PREMIERE: INTO OBLIVION — “EAGLE OF THE SERPENT SUN” appeared first on NO CLEAN SINGING.

AN NCS PREMIERE: INTO OBLIVION — “EAGLE OF THE SERPENT SUN”