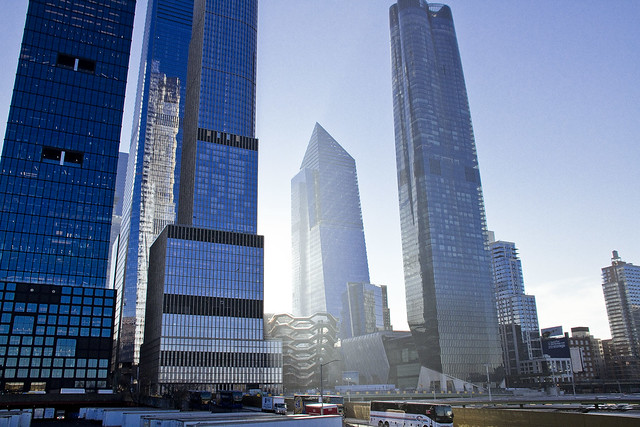 That’s the first phase of the Hudson Yards project pictured above. What’s expected of one such as myself would be to condemn, criticize, or condemn the place. Yes? Ok then.

Here’s my three “C’s.” I personally find the design of Hudson Yards to be quite off, given its total embrace of 75 years old urban planning chestnuts like “superblocks” and “towers in a park.” Hudson Yards ignores its surrounding neighborhoods contextually, offers a harsh and unfriendly pedestrian space, and is guilty of architectural banality. No thought seems to have been given on the subject of its relationship to the position of the burning thermonuclear eye of god itself’s journey through the sky, as the reflective tower facades cause harsh light to broadcast and strobe about from on high. Even sunglasses won’t help when walking westwards on 32nd or 33rd streets in the morning, or eastwards from the Hudson coast of Manhattan in the afternoon/evening.

Walking through the “zone,” I was keenly aware of how unwelcoming the place seemed, displaying emotional sterility while trying too hard to be “artsy.” Every design attempt at being “playful or whimsical” reminded me of a crass and cheaply rendered version of Disneyworld. Rust, peeling paint, and cracked cement is already visible on and around the “Bloomberg Building” for instance.

Homogeneity is what the City Planners like, and in Hudson Yards their vision is writ large. These folks hate the heterogenous chaos of cities, preferring the neat appearance of shopping mall gallerias. Long story short, I’m not a fan. 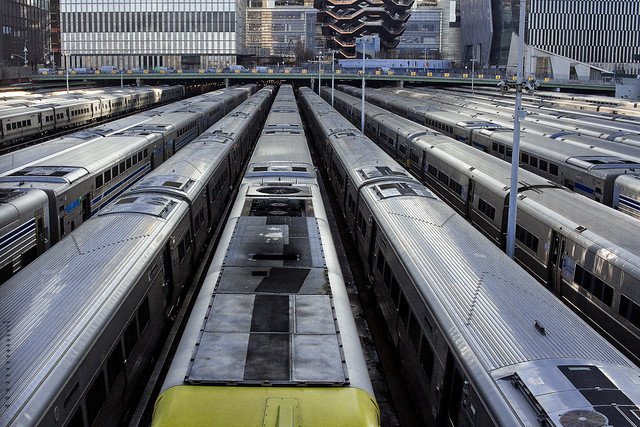 On the other hand, gazing upon these shots, which were gathered up on the High Line, I have to remind myself what used to be here – which was a whole lot of stuff nobody wants. Long corridors of graffiti covered concrete walls vouchsafing the rail yards below, open air drug dealing, and more prostitutes than you could shake a stick at (pun intended). This was a “dead” section in busy midtown Manhattan, incongruously sandwiched in by neighborhoods that didn’t end two to three blocks short of the Hudson. The long eastward trek from the Javitz Center for convention goers back to the subways and Penn Station, the automobile commuter focused street design… the west side in the 30’s was never a destination you’d want to tell your mom you were heading towards.

Is this incarnation better? Worse? Only time will tell. 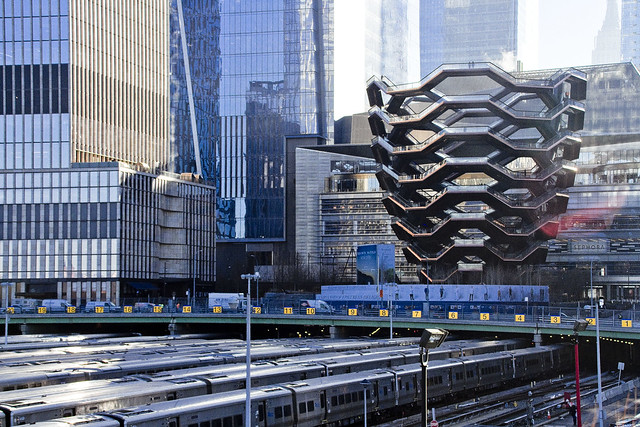 What I can tell you, after walking the camera through and reviewing the photos gathered, is that every single minute I’ve spent opposing the Sunnyside Yards proposals here in Queens has been time well spent. The fancy pants crowd which is in favor of the gargantuan endeavor of decking the Sunnyside Yards doesn’t really understand what it would entail. They haven’t fully digested the reality of the construction or come to the understanding that to justify the colossal $22 billion estimated cost of the deck, you cannot build small or even medium – you have to build big. That’s an economic reality.

Look at that shot above, and imagine you’re standing in Queens Plaza. Now you’re starting to realize what’s what and why we have to keep this from happening in Queens.

“In the Shadows at Newtown Creek,” an 88 page softcover 8.5×11 magazine format photo book by Mitch Waxman, is now on sale at blurb.com for $30.