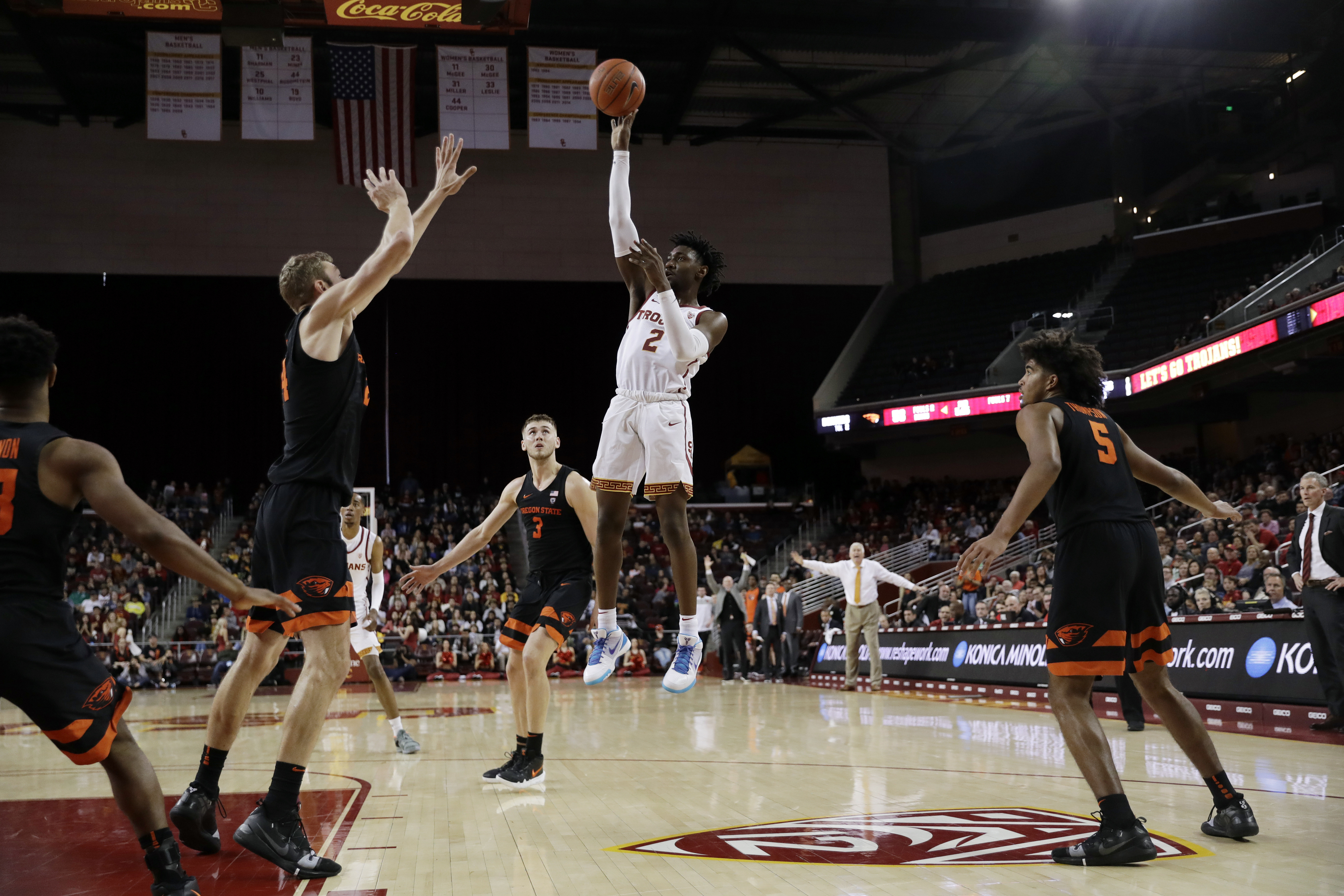 LOS ANGELES >> The fans sprinkled throughout the Galen Center seats buzzed Saturday afternoon when Jonah Mathews spotted up along one side of the 3-point arc, caught a pass from Shaqquan Aaron and floated a shot to reclaim the lead for USC in the final minutes of its home finale against Oregon State.

Mathews’ 3-pointer dropped through the rim, positioning the Trojans ahead by one point with 3:54 left.

But the spirited comeback attempt withered. The Trojans, who had previously trailed by as many as 10 points early in the second half, would go scoreless for the next three minutes and lost to the Beavers, 67-62, ending a brief two-game winning streak.

Over a series of critical late-game possessions, the Trojans unraveled, including a bad pass by Derryck Thornton that marked a turnover, three missed 3-point attempts and a charging foul against Nick Rakocevic who ran over a smaller defender in the key. In total, they missed five consecutive shots before Aaron hit a 3-pointer with 22 seconds left. But at that point, they had fallen behind by nine points, the outcome no longer in question.

It wasn’t the only cold spell for the Trojans, as they shot just 29.6 percent from 3-point range, making only eight of their 27 attempts. They were even worse at the free-throw line, missing all six attempts. It was the first time in school history that they had failed to make at least one free throw in a game.

“I’ve never been in a game where we didn’t make a free throw,” USC coach Andy Enfield said. “I don’t know what to tell you. We missed wide open 3s. We had open looks. We have to shoot better to beat a team like Oregon State.”

The defeat kept the Trojans, who fell to 15-13 overall and 8-7 in the Pac-12, from overtaking the Beavers (17-9, 9-5) for third place in the conference standings. It was also another close loss to Oregon State, which defeated them 79-74 in overtime in January in Corvallis. Including Saturday’s loss, the Trojans have lost five of their six games this season decided by five points or less.

Along with a handful of teams, USC is vying for a top-four finish in the Pac-12, which would secure an opening-round bye for the conference tournament next month, affording an easier path in an attempt to compete for its automatic berth for the NCAA tournament.

Saturday was also a sour final note for Bennie Boatwright, the Trojans’ star senior forward who was playing in his final home game in front of an announced crowd of 4,772. He finished with 13 points and made three of his seven 3-point attempts, but also missed three free-throw attempts.

Boatwright showed an upbeat demeanor when he spoke with reporters following the game and remarked that the loss was not “too tough.” He was proud of his career.

Before tip-off, Boatwright, along with Aaron and walk-on Devin Fleming, were honored in a brief ceremony at center court and given framed jerseys. Boatwright drew an ovation when he emerged from the tunnel with his family members.

The Trojans got off to a slow start after the emotional ceremony and fell behind by halftime, trailing the Beavers, 31-27. For most of the first half, they were without center Nick Rakocevic, who was benched after he picked up a flagrant foul about three minutes in.

“It changed the flow of the game,” Enfield said. “It changed our team significantly.”

Officials whistled Rakocevic for a flagrant 1 foul after a replay review that followed a sequence in which Rakocevic had grabbed a rebound. Sophomore Victor Uyaelunmo filled in his place. It was Rakocevic’s second foul, and he would end up plagued by foul trouble for most of the game, limited to only nine minutes.

“He’s our anchor down low,” Boatwright said, “and he’s missed when he’s not in the game.”

Nearly half of Oregon State’s points on Saturday came in the paint, and the Trojans faced a difficult time against the frontcourt tandem of 7-footer Kylor Kelley and Tres Tinkle, who had 15 points and 14 points, respectively. Rakocevic ranked second in the Pac-12 in rebounds and leads the Trojans with 9.7.

But the Trojans, in particular, missed Rakocevic on offense, where he has been their second-leading scorer behind Boatwright, averaging 15.5 points. Their 62 points equaled their second-lowest total in a conference game this season.