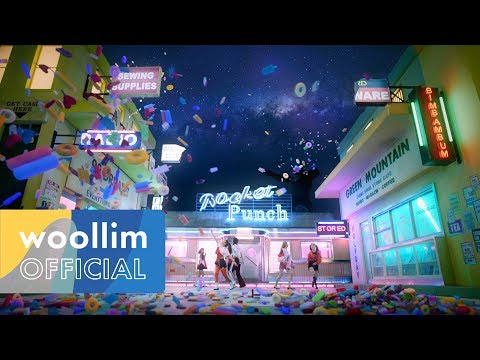 As summer draws to a close, August offers the last chance of to enjoy some cool and refreshing summer fun. Sadly, summer this year has been rather lackluster musically as instrumental breakdowns replaced the hook/chorus of many songs. Aesthetically however, MVs offered bright colors and cheerful settings that guaranteed to lift our mood.

With only a few big-name groups such as Seventeen and Red Velvet releasing music in August, it was a good month to get to know rookies, mid-tier/smaller name groups, and older legends. Here are a few of August’s underrated offerings that deserve our attention.

Woolim Entertainment‘s new girl group Rocket Punch made an eye catching debut with an oddly titled song. The tropical song conveys the feeling of excitement as one starts something new, ringing it in wonderfully with a “Bim Bam Bum.”

It’s obvious like fire, you’re falling in love with me even more
It’s a moment that lasts forever
Our beginning is brilliant
And your heart burns like the sun.

The bright and colorful MV celebrates the group’s debut and the start of something new. The six members dance in front of a theatre with a board announcing the show, “Rocket Punch,” in large letters. Other such boards and posters fill the MV, welcoming the group with the words, “Adorable,” “Crush on Rocket Punch,” and “Our Start is Wonderful,” among others. Ice creams float in the sky and a tiger casually walks by. Little elements like these abound, giving Rocket Punch a great, energetic start to what will hopefully be a long and illustrious career.

Did someone say K-pop is not political? In light of ongoing South Korea-Japan tensions, rookie group Mont released the very patriotic “Long Live The Republic of South Korea.” The MV has been filmed on a rocky island known as “Dokdo” in South Korea and “Takeshima” in Japan, which forms the subject of a territorial dispute between the two nations. Rapper Roda opens the song with:

Freedom and right that was stepped on by them,
We don’t even hope for mercy,
All we want is one thing, Korean liberty,
Even if you press and choke my neck, I will shout Korean liberty.

Political considerations aside, “Long Live The Republic of South Korea” is actually a good song. This aggressive sound suits Mont better than the sweet pop sound of the group’s January debut, “Will You Be My Girlfriend?” and late August comeback, “Rock, Paper, Scissors,” neither of which helps the group stand out among the crowd.

First generation boygroup g.o.d’s vocalists and maknae line members Kim Tae-woo and Son Ho-young debuted as a unit with the playful “Game Over,” which reminds us to treasure our friends. HoooW confidently break away from the lacklustre trends presently gripping K-pop, and offer a melodic, laid back, and cheerful track that is perfect for a relaxed, windy evening by the beach with your friends.

In a cute MV that has the power to endear the older idols to present day audiences (such as me), the duo take on the role of friends, one of whom (Ho-young) mopes over a girl. His friend, Tae-woo, talks him into meeting her and resolving whatever is bothering him. Hilarity ensues as Ho-young tries on different outfits and drives erratically over to the party at her house, much to the exasperation of his accompanying friend. What happens next? Do watch the MV to find out.

In case it was not already clear from the first listen, “D.D.D” stands for “Dance, Dance, Dance.” The Boyz took home a number of rookie awards in the year end ceremonies at the end of 2018 and still appear to be going strong. Their latest comeback is a noteworthy addition to a steadily expanding discography. In “D.D.D,” the boys dance as their hearts flutter when they look into the eyes of a lover.

An energetic pop track, “D.D.D” is a breezy song that relies heavily on synth-based instrumentals, yet offers light, cheerful summer fun with a distinctly youthful feel. The colorful MV takes one back to summer holidays and breaks from school as it follows the boys through a fun summer day. The members, on their own at first, follow magical signs that bring them all together. These signs eventually lead the group to a game arcade, an amusement park, and finally, food! Who could say no to such a day?

Everglow’s debut found a firm place in our Mid-Year Review that considered the most impactful debuts of the first half of 2019. The group bet on attitude and flair, instead of playing it innocent and cute, pulling off their concept choice with aplomb. How did their first comeback compare? Everglow continues forward with sass and confidence as they inform the listener that if they are not the first from them very start, it is “Goodbye, Au revoir, Adios.”

The consistency in concept should help retain fans even as they add new elements. The instrumental that replaces the chorus is, for once, a meaningful choice as its arrogant, hard-hitting sound amplifies the group’s concept. In the choreography MV accompanying the song, the girls alternate between two expressions — looking coldly into the camera or smirking condescendingly — as they dance in a desert, in front of a screen of some sort, and in a museum. The makeup and styling of the members, and the grandness of the sets, all stress that these girls are not to be messed with.

Up10tion returned with eight members as ProduceX101 participants Kim Woo-seok and Lee Jin-hyuk took on separate promotions. I was curious as to whether the group would be affected by the absence of two members, but the concern was unfounded. In such a large group, the remaining eight members manages to cover for the absent ones quite easily.

“Your Gravity” is an energetic electro-pop track about being pulled in by the power of love, much like the pull of gravity. The boys dance and play around colorful sets in the MV. The camera moves and rotates constantly as though it is unaffected by gravity, so much so that watching the MV too closely could induce a headache.

Gravity causes the world to behave in funny ways, including the song. Just as an object circling the earth is actually falling towards, but constantly missing, the planet, the song circles noticeably around a hook but never actually gets there. While a hook is not an absolute necessity in music, it does help make songs more memorable. Without any other standout elements, “Your Gravity” is a fun song that will be welcomed by fans, but one that the casual listener may not be able to recall easily.

Following a long break, In2it returned with the single, “Run Away,” minus maknae Kim Sung-hyun, who participated in ProduceX101. The group’s woefully short discography consists of under 10 songs spread out over nearly two years. The lack of any promotions for “Run Away” on music shows is further testament to MMO Entertainment’s disinterest in the group. Fittingly, the lyrics, ostensibly about running away with (presumably) a lover and escaping the harsh reality that imprisons the persona of the song, contain lines like these:

Don’t stop me, don’t let go
Trying to escape from this suffocating place

An prominent electric guitar breathes life into the song, giving it a distinct rock sound despite it clearly being a dance track. The MV cleverly utilizes light to convey the mood. At the start of the video, it is night and the boys’ expressions are dark as they perform the choreography. By the end of the MV, however, the members run through a narrow passageway and break free into the light of day. Their expressions finally lighten up and they smile in contentment as they breathe in the fresh air.

While not giving individual members much room to shine, the song and MV do bring out the group’s strengths as seasoned performers and strong vocalists. I look forward to seeing what In2it releases next, although it will probably be a long wait.

Readers, were there any other releases from August deserving of our attention? Share them in the comments!