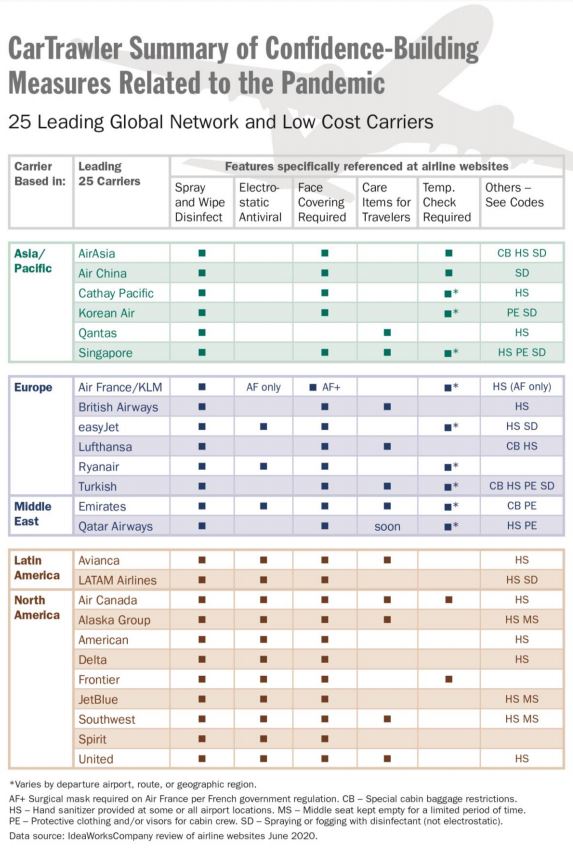 The world’s biggest air carriers are taking common steps to prevent the spread of COVID-19 aboard aircraft, with the hopes of attracting flyers once more. A study shows spray and wipe disinfecting, mandatory face coverings and electro-static antivirals are the most common measures airlines are using to fight against the novel Coronavirus.

The world’s 25 leading global airlines and low-cost carriers are all taking common measures to ensure flyers stay healthy on their aircraft, including utilizing spray and wipe disinfectants and introducing mandatory face covering policies. The activities were revealed in the CarTrawler-sponsored Summary of Confidence-Building Measures Related to the Pandemic study, completed by IdeaWorks.

To determine what airlines were doing, the research group went over the websites of the world’s biggest carriers in three different regions: Asia-Pacific, Europe and the Middle East , along with North and Latin America. In each area, there were common trends every airline is taking to prevent the spread of COVID-19. 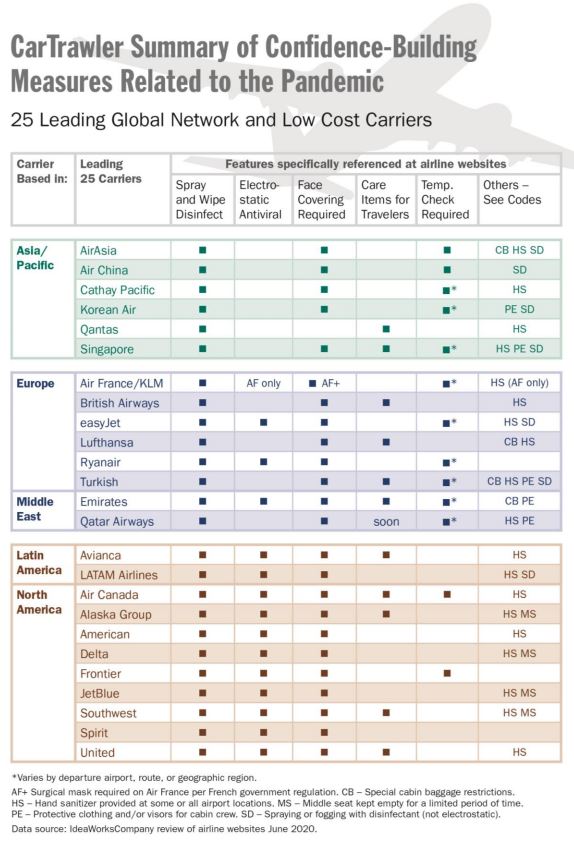 All 25 airlines are using spray and wipe disinfectants between flights to keep cabins clean. In addition, 24 of the airlines are requiring passengers to wear a face covering when flying. The study suggests Qantas is the only one without a required face mask policy.

While Electro-static antiviral spraying is popular in the Americas, the practice isn’t widely used in foreign countries. While all of the North American and Latin American airlines are using electro-static spraying, only half of the Europe and Middle East carriers are utilizing the tactic, while none of the Asia-Pacific airlines are taking the same precaution.

The practice of offering personal care items for flyers is also split. Six European and Middle East carriers will start offering protective amenities to passengers, compared to five in the Americas (including Alaska Airlines, Southwest Airlines and United Airlines), and two Asia-Pacific carriers.

“It’s hugely encouraging to see the proactive and sensible measures airlines are taking to prioritize passenger health and safety,” said Aileen McCormack, chief commercial officer at CarTrawler, said in a press release. “The travel industry has been hit hard, but these measures signal positive momentum and will provide consumers with the confidence and peace of mind they’re seeking.”

While the airlines are united on face mask usage and disinfecting aircraft, implementation of other protective measures are split by region. According to the survey, only three carriers in the United States are blocking middle seats, while everyone else is opting to load aircraft to capacity. However, Delta confirmed to FlyerTalk they would continue to block middle seats through Sept. 30, 2020.

Regardless of amenity kits, 19 of the 25 airlines are making hand sanitizer available to flyers, while only five airlines are providing enhanced personal protective gear to their flight crews. Six airlines (none of which are in the Americas) are using a fogging disinfectant to clean cabins, including Air China, Korean Air, and EasyJet. Only four airlines – AirAsia, Lufthansa, Turkish Airlines and Emirates – are restricting cabin baggage allowances to improve loading speed and reduce interpersonal contact between flyers.

The report ends with a call for flyers to work with cabin crew to ensure safe passage during these stressful times. There have been at least two confrontations in the past 30 days where flyers have been removed from aircraft due to non-compliance with face covering policies.

“The scale of effort by the world’s airlines to build traveler confidence during the pandemic is impressive, and often exceeds regulatory requirements. It’s the cabin crew who ultimately deliver the promise of traveler safety and comfort,” the report reads. “Let’s hope travelers all treat cabin crew with kindness and respect, even if they feel pandemic-related measures are inconvenient or intrusive.

“After all, the primary concern of cabin crew has always been the safety of their passengers, even at the risk of their own lives.”

Editor’s note: The chart in this article has been updated to reflect a revision in the original IdeaWorks report. The company omitted Delta Air Lines among the airlines blocking middle seats. Delta confirmed to FlyerTalk they would not book middle seats through Sept. 30, 2020.