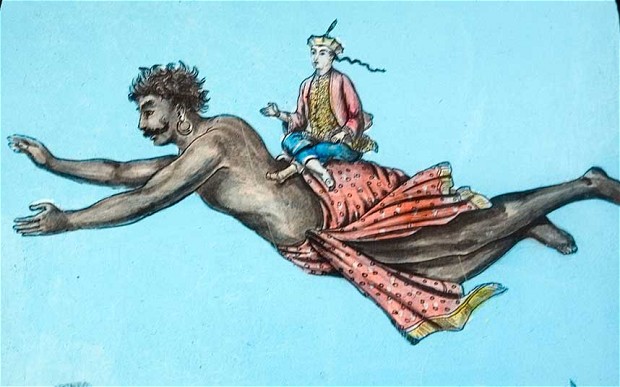 Jinn: The Arab spirits who can eat, sleep, have sex, and die.

Arab poet Kuthayyir ‘Azzah of the Umayyad period (661–750) once described how he became a poet:
One day [...] a man on horseback came toward me until he was next to me. I looked at him. He was bizarre, a man made out of brass […]. He said to me, “Recite some poetry!” Then he recited poetry to me. I said: “Who are you?” He said, “I am your double from the jinn!”
That is how I started reciting poetry.
Jinn (often al-jinn or djinn) are shape-shifting spirits made of fire and air with origins in pre-Islamic Arabia. They are the inspiration for Aladdin’s genie, and have held space in Arab culture for almost as long as Arab culture itself. And yet, having transcended both religion and the physical world, so little is understood about the spirits.
Neither inherently good nor bad, Jinn are amorphous entities, able to take the shape of humans and animals alike. Their role in society, too, has been malleable: Jinn have served as a source of inspiration for both the most esteemed classical Arab poets in the first millenium and Disney in 1992 (jinni—aka genie—is the singular of jinn). Both before and after Islam’s introduction—which included mentions of jinn in the Qur’an—jinn have remained an inexplicable entity. “The orthodox scholars say you can’t understand jinn,” Arabic literature researcher Suneela Mubayi tells Broadly. Still, despite their mysterious nature, there are some things historians, Islamic scholars, and believers of jinn have come to discern about the spirits.
According to El-Zein, pagan Arabs (big believers in the occult) worshipped jinn long before Islam was introduced in the seventh century, believing that the spirits were masters of certain crafts and elements of nature who had the power to turn plots of land fertile. Jinn are believed to both interact with humans in our reality and lead their own lives in a separate realm. “As spiritual entities, the jinn are considered dual dimensional, with the ability to live and operate in both manifest and invisible domains,” El-Zein writes. 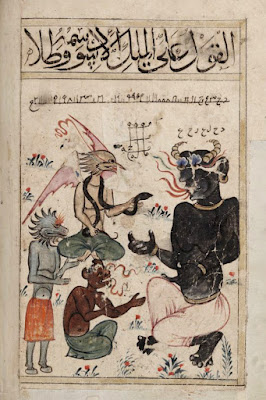 Jinn’s influence has been widespread both religiously and culturally in pre- and post-Islamic Arabia. They can talk or otherwise communicate with people, though some, like poets, are more likely than others to be hit up by a jinni. Ancient Arabs, known for their affinity for poetry, even coined the term sha’ir, meaning an Arabic literature poet who was “supernaturally inspired” by jinn, to designate poets like Kuthayyir ‘Azzah. “Poets in pre-Islamic Arabia often said they had a special jinni that was their companion,” says Mubayi. “Sometimes they would attribute their verses to the jinn."
In the early seventh century, when the Islamic Prophet Muhammed (SAWS) began spreading the word of the Qur’an, he shared multiple surahs, or verses, that mentioned jinn, including one named entirely after the spirits.
Still, in both the past and present, stories of those possessed by jinn are not hard to find. Exorcisms, which can involve reciting the Qur’an over a person or, more rarely, physically beating the jinn out of them, are performed in some circles on those thought to be possessed by jinn (despite being condemned by mainstream Muslims). People who partake in the latter believe that the pain is not felt by the person who the jinni occupies, but the jinni themself. And while reading the Qur’an is a popular exorcism method, Jinn’s links to possession predate Islam. “The Arabs of pre-Islam invented a whole set of exorcism procedures to protect themselves from the evil actions of the jinn on their bodies and minds, such as the use of beads, incense, bones, salt, and charms written in Arabic, Hebrew, and Syriac, or the hanging around their necks of a dead animal’s teeth such as a fox or a cat to frighten the jinn, and keep them away,” writes El-Zein. In Arabic, the word majnun—meaning possessed, mad, or insane—literally means “to be possessed by a jinni.”
Despite stories of possession, Jinn are remarkable in their propensity towards neither good or evil. In Christianity, demons and evil spirits appear as entities carrying out Satan’s maleficent wishes, but neutral spirits like the jinn have no place. El-Zain believes that jinn have been robbed of the scholarly devotion they deserve, in part because they complicate the narrative of monotheism, what it means to believe in “the existence of intelligent spiritual entities without necessarily demonizing them.” Jinn—different than both angels and the devil—oscillate between good and evil, making them all the more relatable. They can be pious, they can help us, or they can hurt us, as shown in folktales from One Thousand and One Nights (commonly known in English as Arabian Nights). In one of these tales, “The Fisherman and the Jinni”—the inspiration for Disney’s Aladdin—a fisherman pulls a bottle out of the sea. When he opens it, a jinni appears. Angry to have been trapped in the bottle for centuries, the jinni tells the fisherman their plan to kill him. But after the two exchange stories, the jinni changes their mind, instead bestowing the fisherman with a life of good fortune.
Fluid in form and interpretation, jinn not only possess and converse with us, but they can also fall in love (or in bed) with humans. Pre-Islamic poet Ta’abbata Sharran once wrote about sleeping with a jinniyah (feminine form of jinn) in a poem called “How I Met the Ghul”.
According to El-Zein, the ability or desire to have sex isn’t all jinn have in common with humans. Like us, “jinn eat, drink, sleep, procreate and die,” she says, though their mortal lives can extend for thousands of years. And yet, while we can relate to the spirits on many levels, the consensus remains that we cannot fully comprehend jinn—though we can try.
Via: vice.com
Source: visualmagick