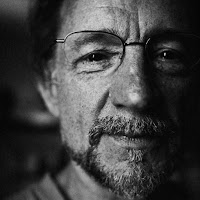 Peter Tork - His Life and His Instruments

OK I admit it. When I was around 13 years old, The Monkees television show was a very popular for folks around my age.  Every week I watched the show, and I even went to The Monkees concerts.


The premise of the show was loosely based on the Beatles movie, A Hard Days Night, in which a band of popular musicians experience silly daily exploits. The show featured the four Monkees living together in a beach house somewhere in Sourthern California. Unlike real band members, the four Monkees were always joyful, held no antonymous, and did not want to kill each other.

You knew it was fiction.

Not too long after the show aired, the group went on tour. I went to two different concerts with a friend to see them perform. You could not hear much of the music since all the teen girls there were screaming at the top of their lungs. However I do recall the stage being set up with two large Vox cabinets at either side.

The Monkees theme song came on over the PA system. Girls stood on their feet and screeched, and suddenly those large Vox cabinets opened up, and two Monkees emerged from each one.

Mike Nesmith played a Gretsch 12 string electric guitar, and Peter Tork played a Gretsch bass guitar. I was told years later, by some musicians in the know, that most of the music originated on a tape recorder behind the stage. But I could tell Nesmith and Tork were playing their instruments along with it.

Tork also played the Vox organ on I'm A Believer during the concert. The amplifiers were made by Vox USA.

Peter Tork passed away on February 21st of this year after a 10 year battle with cancer. He started his musical career in Greenwich Village in New York City.

His given name was Peter Thorkelson.


Peter began studying piano when he was nine years old, and soon learned to play banjo, acoustic bass, and guitar.

In the early 1960’s he moved to New York City, and befriended some up and coming musicians on the folk music scene including Stephen Stills.  Tork played banjo in Greenwich Village folk clubs during that era.


In 1966, Stills auditioned for a new television series, but was turned down for the job. He suggested that Tork should audition for the job, since they were looking for a young, blonde, Nordic looking actor. Peter Tork got the job.


Tork took on the part of a lovable dummy, on the television show. He had honed that image as part of his folk act. He was anything but a dummy.

The head of the music department for Screen Gems was Don Kirschner. Kirschner was all about the money and knew his way around the music business. After all he owned his own publishing songwriting company, Aldon Music, in New Yorks Brill building, and managed songwriting talent such as Neil Diamon, Carole King, Gerry Goffin, Cynthia Weil, Barry Mann, among others. Kirchner also owned three record labels.

Kirschner was hired by the producers of the Monkees to provide the music for the show. And many of the song became hit records. Studio musicians known as The Wrecking Crew played the instrumental parts.

The Monkees sang their parts. But there were some exceptions.

Tork, and his friend Joey Richards wrote the closing theme song for the TV show. It was called “For Pete’s Sake.”  It is also said that he played the piano on Day Dream Believer.

For the show Tork played bass guitar in the Monkees’ band. Sometimes he was featured playing a Vox Continental organ.


I will not go into detail, but eventually the actors, who in fact were pretty good musicians, and songwriters, got into difference of opinion with Don Kirchner, and wanted to write, produce, and record their own songs.

Tork was very interested in the recording process. The band produced six albums, four of which were number 1 on the Billboard chart. But like most bands, creative differences, and tensions escalated. Tork was dissatisfied with his situation, and bought out the remaining four years of his contract, then quit the group.

In 1967 Peter took a trip to London, and contributed a banjo part to George Harrision’s soundtrack for his film Wonderwall.


Tork formed a band with some friends called Peter Tork And/Or Release, and recorded some music, but did not get much reception. They disbanded when he ran out of money.

He worked on some other projects with his friends including Mickey Dolenz, and founded a music and film company. And during this period, Peter Tork became a father.

Sadly in 1972 he was arrested for possession of hashish, and spent three months in prison.

He later moved to Fairfax in Marin County, California and joined the 35-voice Fairfax Street Choir and played guitar for a shuffle blues band called Osceola.

Peter Tork returned to Southern California where he married and had a son, then took a job teaching at Pacific Hills School in Santa Monica. He spent a total of three years as a teacher of music, social studies, math, French and history, and coached baseball at a number of schools.

There were more than a few Monkee reunions. The first was at Disneyland in 1976.

In 1980 he recorded a six song demo for Sire Records. Unfortunately it did not get a very good reception.

In 1985 Davy Jones and Mickey Dolenz were touring in Australia, and the following year asked Tork to join them for a 20th anniversary greatest hits release. The group toured for a few years, sometimes with Mike Nesmith.


It was in 2009 that Peter was diagnosed with a rare form of cancer, and underwent surgery, and radiation.


By 2011 they got together for concerts in England, and the United States. Through the years Tork acted in some films and television programs.


Peter Tork’s long neck banjo, that he played during his folk years, on recording, and occasion on the Monkee’s TV series was made by the defunct ODE Banjo Company. It was possibly a 1961 model and had a figure eight style peg head.


The ODE company was eventually purchased by the Baldwin Piano company, and it is rumored the company made the only Baldwin long neck banjo prototype and gave it to Peter Tork.


There was a deal with Baldwin, and Screen Gems to feature Gretsch instrument on The Monkees show. Baldwin went on to make a Monkees six string model 6123,.

On the TV show and in concert, Peter Tork played a burgundy Gretsch electric bass, model 6073. This bass guitar featured two pickups, and a 4 on-a-side headstock. It is said, that bass was prone to feed back, despite the fact it had faux “f” holes.

For concerts in the latter part of 1967 Peter later switched to a 1966 Guild Jetstar Bass Guitar, This instrument had one pickup, and a four-in-line headstock.


Most recently, during the Monkee reunion concerts, Peter  is seen playing a red Fender Stratocaster with EMG pickups, and a Floyd Rose tremolo system. He also played this same guitar with his last band  Shoe Suede Blues. There is no logo on the guitar.

He played a few other Fender Stratocasters at reunion concerts. The red one seemed to be his favourite.

Throughout his career, Peter Tork played a number of different instruments, including a Fender bass, a sunburst Guild acoustic, a 12 string of unknown origin, and a Taylor mini.


I did find a couple of other pictures of Tork playing what appears to be a Carvin Guitar. This was from a television appearance on the (org) Rosie O'Donnell Show back in 1996. 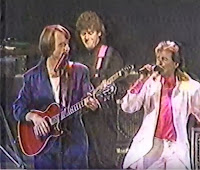 This picture is from a 1986 Monkees concert. Peter is playing a Guild Songbird, electric acoustic guitar.

Despite being labeled "The Pre-Fab Four", the Monkees gave us some very memorable songs, and entertained us when we were young, and into our senior years

Peter Tork - His Life and His Instruments