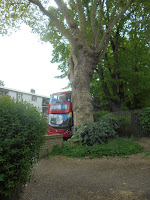 With Jo’s Thameslink cancelled and a tricky back street route from Nunhead station this Journey started a whole hour later than intended.  Fortunately the area around St Mary’s Church included a small garden with benches useful for anyone waiting to board the 78 bus. This route does not pass the excellent,now restored Pioneer Centre  but those and other flats are doubtless the reason a bus route penetrates to this very residential area, beautifully quiet at this time of day.  The church has obviously been rebuilt with a component for community outreach – I had hoped this would include some public loos but Thursday proved to be a day of closure! 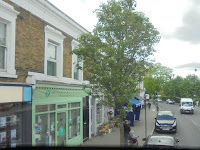 We set off once Jo arrived and twirled round the back streets to emerge into Nunhead Lane – there are many attractive period houses and smaller scale blocks fill in.   At one end of the Green the almshouses remain and at the other the redevelopment  seems to have been dragging on for a while. 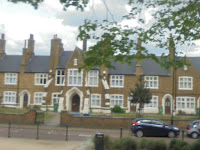 The 78 cuts across the bottom of Peckham Rye quite smartly and then runs into what is a 14 months massive road closure – not only is there deep digging and I hope both gas and water mains replacement but also some of the older buildings are taking the opportunity to have a face lift. There is no access so all the buses go round the back of the High Street – in some ways this is quicker as less risk of random shoppers toppling into the road with their overloaded trolleys, especially towards the weekend . Not that this diverted route is without its roadworks... 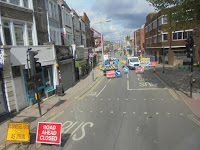 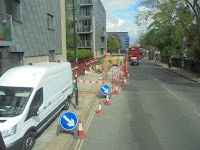 Soon we were round by the Library, next to which the Mountview Theatre is almost complete, having moved down from the lofty heights of Highgate.  So good that Peckham will have access to a purpose built theatre space, offering teaching alongside.

Just as you think the 78 might just be a 63 clone it heads right in order to serve the many differently aged blocks of social housing.  There have been improvements here since we last came round
With a new adventure playground on the site where footballer Rio Ferdinand once played. 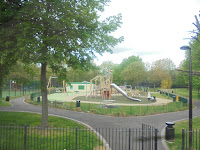 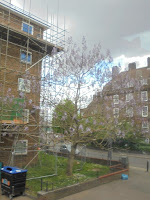 Remembering that this was once a single decker it often keeps to lesser roads so after a few metres along the Old Kent Road it turns right at the big Tesco’s and heads down Dunton Road where they seemed to be building a hotel. 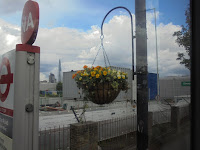 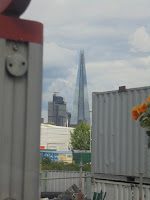 The section from here through to Bermondsey was quite slow, possibly as the streets are narrow but still well used – we passed Bermondsey Spa Gardenswhich do indeed commemorate a once nearby Spa, developed to rival the more famous (and ultimately more accessible) Vauxhall Gardens. The current Spa Gardens prosaically date from bomb clearance in 1954 but have been revamped, along with much of Bermondsey, which we could see as we passed yet more Sales Suites .  (At one point before re-starting the Bus project we had thought we might try our hand at visiting the various show flats to view in London but sadly many require more serious punters than a couple of ‘day trippers’.) 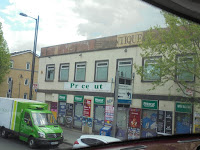 These seemed to come thick and fast as we came past Bermondsey Square and approached the Tower Bridge Road, and past the Caledonian Market (and yes, Jo, it had originally been up at yourCaledonian Road).  No-one much buys middle range antiques any more and younger generations are apt to reject their parents’ offerings …

As the road narrows towards the bridge we spotted the Pommelers’ Rest – as Jo said since it’s a Wetherspoons Pub they will explain the history of the name even if they make it up.  In this case the area was known for the leather trade and the guys who pommelled the leather ... presumably needed the odd rest and drink? 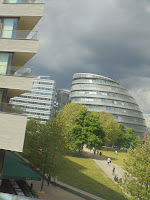 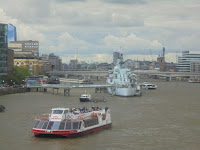 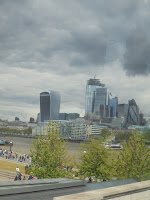 There was a splendid wisteria totally entwined in the fire escape of one of the older blocks, which probably invalidated its primary function.
As we crawled across Tower Bridge (just as well there are barriers to keep traffic and pedestrians apart) we remembered how scary it was walking across the glass platforms up on the Bridge Experience. 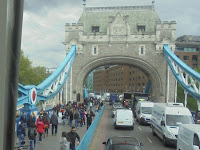 At Peckham we had been joined on the top deck by a young couple who got justifiably excited as we crossed the bridge and just as delighted as we went alongside the full length of the Tower of London, with a good view into the moat . The gutters were replaced in Victoria’s time said Jo, spotting her insignia.  Our ‘Museum’ visit had coincided with the Poppy Display and ever since the moat has looked strangely empty.
After Tower Bridge Gateway Station (the furthest west the DLR seems to reach) come the Minories – named for ‘second rank’ monks otherwise known as nuns. 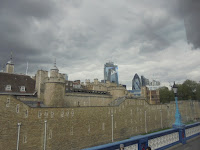 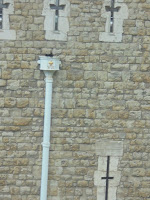 After this the 78 does a kind of circuit with a short dash into Tower Hamlets and then along by St Botolph and the City’s only public secondary school – Sir John Cass
This blog is a labour of Love whose starting point was Sir John Cass, and his enormous legacy
The rather handsome building just by St Botolph’s has served various educational institutions in its time though I am not sure what it does today as the School bearing his name is now in Stepney. 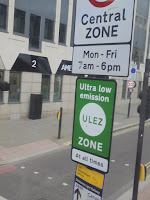 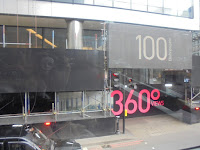 It seems it’s a long time since Goodman’s Fields was ever anything but built up, as there have been three ‘theatres’ there in its time and its now lots of shiny flats…  After some lesser known corners of the City /Tower Hamlets borders we were back along Broadgate, bustling with folk this lunchtime, and then round some more wriggles to the left into Shoreditch and the final resting place in Curtain Road.
It was to be but a short walk to the Number 35 but somehow we landed up on Great Eastern Street rather than Shoreditch High street, a tale Jo as already told on the 35.

After our late start we really enjoyed this bus from its modest beginnings in Nunhead over Tower Bridge to the working heart of the City in 55 minutes, rather less time than you might expect. 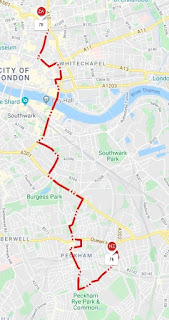