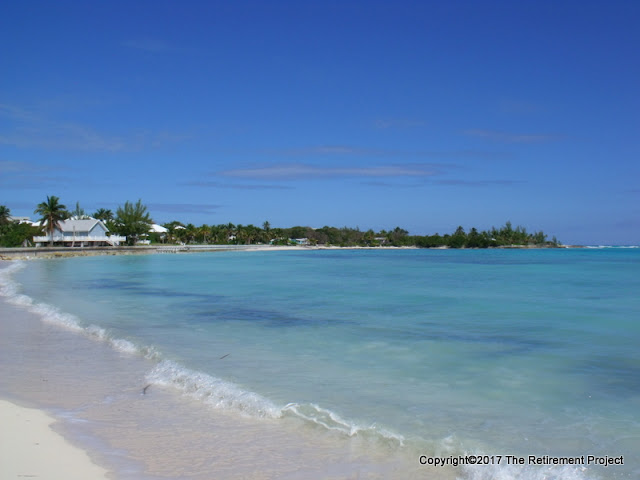 Posted by TJ
February 27, 2017
After just 2 nights in Manjack we made a nice little sail to take a mooring ball in the Black Sound side of Green Turtle Cay. A forecast for just a little bit of weather bringing west winds prodded us to bail. When the inbound weather turned up carrying more wind and rain than expected, we decided it was a pretty good move. 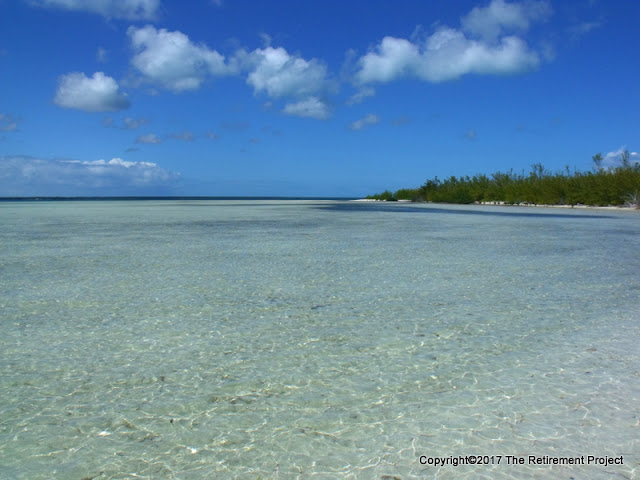 Green Turtle Cay is another one of our favorite places, the little town of New Plymouth being the quintessential Bahamian burgh. There are a couple of little stores that are well stocked. (We found milk, veggies, and ice-cream all in one store!) It is also a better place to be than on anchor if a boat project doesn't go as planned. A nice “plan B” since we had a couple of small issues to address.

A pin hole leak has appeared in the engine exhaust, a patch and clamp should see us back to the States without a hitch. The old GPS that gives our AIS its position information refused to power up. Taking it apart uncovered a spot of corrosion on the power switch inside. It seems to be working now, which is a good thing. Night runs without the AIS can get spooky. The big concern was the water pump leak, which was definitely getting worse. A new seal in the old pump and the old pump installed in place of the new looks to have that problem solved. It appeared that the drive pulley was brushing against the front seal just enough to cause the leak, so please forget everything I said about Jabsco pumps and water leaks. We also tightened up the staysail halyard and life lines, and cleaned at least two layers of grime off the hull.

When not working on the boat we spend time in town. As is our normal experience in the Abaco Islands the people are open, friendly, and curious. Much to my surprise I discovered they are having their own election, but no one seems to talk about it much. Government here, it seems, has no need to be the center of attention of every news cycle. They don't tweet, spend a lot of money on TV advertising, and don't seem to stoop to the gutter politics that Americans respond to with such enthusiasm. Virtually every Bahamian national we have talked with finds that to be both a puzzle and a disappointment. They want to think better of us, but we are not making it easy. The Customs Agent who checked us in put it this way, "You guys are really embarrassing yourselves."

We Americans like to think of ourselves as a good people, better even, than pretty much everyone else on the planet. But we flock to the atrocious, deeply flawed, and petty for leadership; as if the quality of someone's character is utterly irrelevant to the kind of leadership they will provide. This calls into question the quality of our own character, since we find these people acceptable. Well, some of us anyway. There is good reason to think that most of us know better, and tried to avoid having the current resident move into the White House.

Unfortunately the “some” who went the other way may be too many. After all, sometimes, when a person dies, most of their body's functions are still working fine. Its just the lungs that fail, or the kidneys, one little valve in the heart goes bad, or a tiny bit of blood leaks into the brain. Perhaps a few bacteria invade through a minuscule cut  on a finger or toe. In any case something small starts a cascade of failures, and brings about the demise of an otherwise healthy being.

It might be that America's body politic will survive this current fever, and I find it easier to be a bit more optimistic from this side of the Gulf Stream. We are among some of the most beautiful islands on the planet, islands filled with folks just going about their business without drama queen theatrics. Most days the sun sparkles on clean water. Both sunrises (of which I see few) and sun sets (those I normally catch) are spectacular reminders of just how much wonder fills this little corner of the cosmos. This is a place that overwhelms huge egos without effort, marking American's latest dalliance with authoritarianism and hubris as childish, petty, and (frankly) pathetic. But there is some hope that this current disease will not overwhelm all of our systems. If we are lucky our body politic will heal and, in the process, pick up a few anti-bodies to help fight off  future infections with similar DNA.

In the mean time Kintala pokes her bow in here and there, stops for a few days to hide from some weather or to hang out in a pretty place for a few extra days. Jumping through the Whale will be next, making our way into the southern part of the Abaco Islands. It has been a while since we visited Treasure Cay and Marsh Harbor, and it will be good, healthy even, to see them again.