Do the Sacrifices in Ezekiel 40-48 Pose a Problem for Evangelicals? 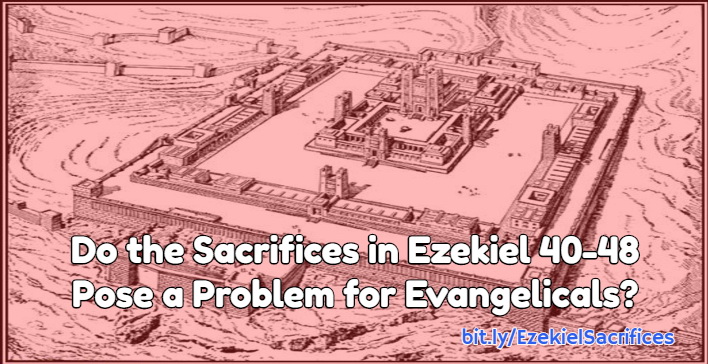 The descriptions of animal sacrifices are no problem for the symbolic school since these interpreters see the section as at least borderline, apocalyptic literature that speaks to us in pictures that are not to be taken literally. Thus, we are to glean eternal truths from the section rather than see actual, temporal events yet to occur.

The descriptions of animal sacrifices are not a problem for the literal, millennial view either, though it takes a bit more explanation to say why this is so. This view does not see the sacrifices as efficacious but only as memorials (much like the Lord's Supper still observed today).

Hebrews 10:1-25 teaches that the Mosaic system was not given to be efficacious in atoning for sin since animal sacrifices could not suffice as penal substitutions for mankind. Only Christ' sacrifice on the cross could achieve this. Thus, the Mosaic sacrifices only looked forward to the finished work to be accomplished.

There are other OT passages that fill out the picture of millennial worship and the omissions (admittedly an argument from silence) are worth noting. There is no high priest, no Day of Atonement, and no Ark of the Covenant where atoning blood would be sprinkled.

Millennial literalists believe any sacrifices offered after the cross (during the millennium) would then look backward as memorials to that finished work (again, much like the Lord's Supper) and would not be meant as efficacious in themselves.

Whether one takes the symbolic or the literal view, the sacrifices described in Ezekiel 40-48 pose no insoluble difficulties for Evangelicals.

© Copyright 2019, David Kowalski. All rights reserved. Links to this post are encouraged. Do not repost or republish without permission.

Do the Sacrifices in Ezekiel 40-48 Pose a Problem for Evangelicals?