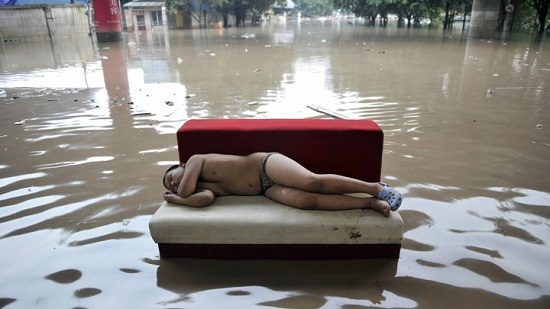 A chronological listing of news articles posted on the Skeptical Science Facebook Page during the past week, i.e., Sun, Feb 17 through Sat, Feb 23, 2019

The 3 Big Things That People Misunderstand About Climate Change

David Wallace-Wells, author of the new book The Uninhabitable Earth,describes why climate change might alter our sense of time.

A child sleeps on a couch in a flooded street in Chongqing, China, on July 20, 2010. REUTERS

The year is 2100. The United States has been devastated by climate change. Super-powerful hurricanes regularly ravage coastal cities. Wildfires have overrun Los Angeles several times over. And it is dangerous to go outside on some summer days—children and the elderly risk being broiled alive.

In such a world as that one, will we give up on the idea of historical progress? Should we even believe in it now? In his new book, The Uninhabitable Earth, the writer David Wallace-Wells considers how global warming will change not only the experience of human life but also our ideas and philosophies about it. It’s possible, he told me recently, that climate change will make us believe that history is “something that takes us backward rather than forward.”

“The 21st century will be dominated by climate change in the same way that … the 19th century in the West was dominated by modernity or industry,” he said. “There won’t be an area of human life that is untouched by it.”

I recently talked to Wallace-Wells about his new book, the difficulty of writing stories about climate change, and which science-fiction prophecy he believes came true. Our conversation has been edited for clarity and brevity.

The 3 Big Things That People Misunderstand About Climate Change by Robinson Meyer, Science, The Atlantic, Feb 22, 2019