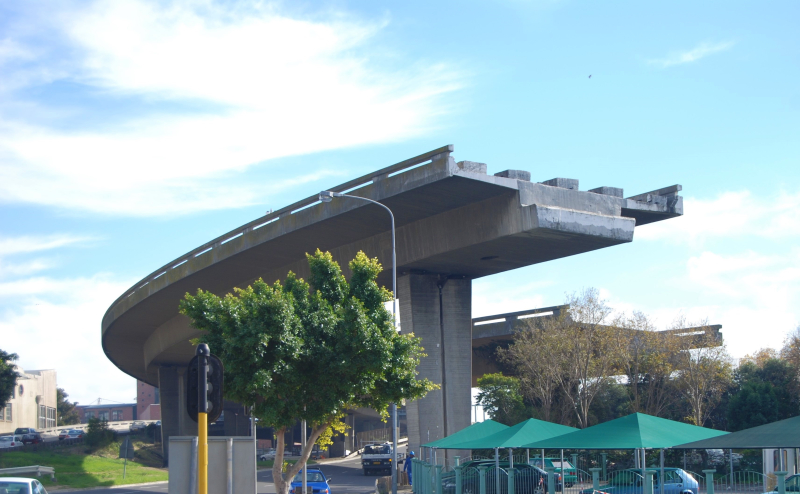 Tax extenders back on track, but going still slow

When it comes to expired tax laws, Congress is in much the same situation as the builders of this unfinished bridge. The basics are there, but there's still work to be done. (Photo by Paul Mannix via Flickr CC)

The measure is his party's legislative mechanism to renew a batch of temporary tax laws, known collectively as extenders. Most of them expired at the end of 2017. Others were given brief new life. Others are set to end at the end of this year.

"For far too long, Congress has not extended important tax provisions in a forward-looking basis, resulting in confusion and uncertainty for taxpayers. This week, we take the first step forward in untangling this mess," said Thompson in introducing his bill.

The full House Ways and Means Committee will mark up the Taxpayer Certainty and Disaster Tax Relief Act, which, as the name indicates, also includes a variety of disaster tax proposals, on Thursday, June 20.

A collection of other family-friendly tax provisions also will get a review by the tax-writing panel tomorrow.

Today, though, here's an overview of the Democrats' new family related tax breaks, along with some tax extenders, primarily ones that apply to individual taxpayers, that soon could come back to life.

Forgiven mortgage indebted: When a lender forgives a portion of debt, the tax code says that amount generally is taxable income. The recession of the late 2000s, sparked by the crumbling housing market, prompted Congress to change this when it applies to mortgages.

Under the Mortgage Forgiveness Debt Relief Act enacted on Dec. 20, 2007, when a homeowner was able to rework his or her mortgage so that a portion of it was forgiven, making the remainder more affordable and allowing them to keep the home, that forgiven amount was deemed nontaxable.

PMI treated as deductible loan interest: When a homeowner can't make a 20 percent down payment, the mortgage lender usually requires the buyer purchase private mortgage insurance (PMI). A temporary tax provision allowed eligible homeowners to deduct the PMI costs as if it were tax deductible interest.

Thompson's bill would reinstate this itemized deduction option retroactively to tax year 2018 and continue it for 2019 and 2020.

Medical expense deduction floor lowered: The Tax Cuts and Jobs Act (TCJA) expanded the standard deduction amounts, meaning that fewer folks now itemize their expenses. However, many of those who still file a Schedule A do so because they have large medical expenses.

Under the Affordable Care Act, these amounts were to go to 10 percent of the taxpayer's adjusted gross income (AGI). That limit was dropped by the TCJA to the previous 7.5 percent level, but only for the 2017 and 2018 tax years. It was to return to 10 percent for tax years 2019 through 2025.

The Dems' proposal would keep the 7.5 percent itemized medical expenses threshold at 7.5 percent for 2019 and 2020 tax years.

Tuition and fees above-the-line deduction back: This tax break that doesn't require itemizing — yes, the TCJA kept some of these, just shifting the claiming to a new Form 1040 schedule — would be back, allowing for the write off of up to $4,000. This so-called above-the-line deduction expired at the end of 2017, but would be back, retroactively for the 2018 tax year and through 2020.

Energy efficient home improvement: Several expired energy provisions would be back, including a credit for qualified fuel cell motor vehicles and electric motorcycles. But the one that many readers of the ol' blog have asked about is energy efficient improvements they made or plan to make to their homes.

It's known officially as the nonbusiness energy property tax credit, but it's popularly referred to as the residential energy efficiency tax credit. It offers a 10-percent credit for certain energy improvements made to taxpayers' existing primary homes.

The credit is nonrefundable and there's a lifetime limit of $500, but if it applies and you haven't used it up on previous home upgrades, it's worth looking into. Basically, this tax break applies to several relatively easy home energy upgrades, such as a new roof or roof products, exterior windows and doors and skylights. Energy Star has details on what qualifies.

Additionally, smaller credits are also available for the purchase of specific energy efficient items, such as an advanced main air circulating fan ($50) or qualified natural gas, propane, or oil furnace or hot water boiler ($150 each).

These would be available, again retroactively to the 2018 tax year, and through 2020.

Added electricity from other renewable resources: Other more elaborate, and expensive, energy upgrades also would get extended life.

The wind production tax break is scheduled to expire at the end of December 2019.

The closed- and open-loop biomass tax break, as well as credits for geothermal energy, municipal solid waste, qualified hydropower production, and marine and hydrokinetic renewable energy, expired at the end of the 2017 tax year. All would be allowed through 2020.

The work opportunity tax credit is set to expire this coming Dec. 31. The Democratic extenders proposal would keep it in effect for qualifying new hires who begin work on or before Dec. 31, 2020.

Estate tax/unified credit would be cut: Under the federal estate tax, there's what's known as the unified credit that covers taxable transfers at a person's death. The unified credit offsets tax, computed using the applicable estate and gift tax rates, on a specified amount of transfers, aka the exclusion or exemption amount.

The exemption used during life to offset taxable gifts reduces the amount left at death to reduce value of an estate and the possible taxes it might face.

The TCJA essentially doubled the basic exclusion amount, which previously was $5 million, indexed for inflation. Thanks to inflation, that amount for 2019 is $11.4 million. It would stay at the level, plus inflation, though 2025 under the GOP tax reform bill. In 2026, unless it was extended, the exclusion would return to the $5 million-plus-inflation level.

The Democratic extenders proposal, however, would accelerate the return to the lower estate tax exclusion amount. It calls for the basic exclusion amount to return to $5 million base for decedents and gifts made after Dec. 31, 2022.

More family tax breaks to be considered: In addition to Thompson's extender's bill, the House tax-writing panel also will look at H.R. 3300, a proposal by Ways and Means Chairman Richard Neal (D-Massachusetts) to expand other family-friendly tax laws.

The maximum EITC for adults without children would be tripled.

The CTC would be fully refundable, meaning eligible filers could a tax refund if their credit amount is more than any tax they owe.

The CDCTC also would be refundable and the maximum credit increased from 35 percent to 50 percent. The phaseout threshold also would be hiked to make more filer eligible.

These enhancements would apply only to the 2019 and 2020 tax years.

Passage possibilities still shaky: These bills are expected to make it easily through the Democratic-controlled Ways and Means Committee. Full House passage also shouldn't be a problem.

However, it could run into trouble on the other side of Capitol Hill, despite bipartisan support of the Senate Finance Committee's leaders.

A major problem is the House plan to cut into the GOP's estate tax relief. Since the GOP still holds the majority in the Senate, this would be a no-go.

But at least the House Ways and Means legislative movement is a starting point for possibly putting many expired tax breaks back on the books, albeit again for only a short time.

You also might find these other posts of interest:

Tax extenders back on track, but going still slow