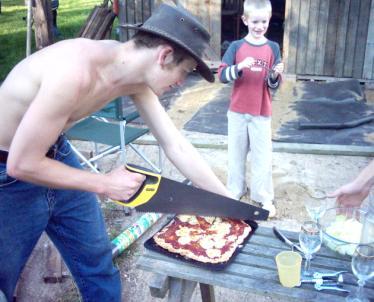 There’s a curious phenomenon going on in the world.

Some people assert that the horse’s hooves must be trimmed in a certain way, and the horse left without shoes. The phenomenon has firm and vocal proponents, as well as firm and vocal critics. It’s called “barefoot trimming.” And I don’t quite get it.

First off, I have trouble with the name. I mean, if you’ve ever tried to trim a horse’s hooves (I have and do), you immediately understand how difficult it is to trim a horse’s hooves when they are anything other than barefoot. If there’s a shoe (with nails) in place, or if the horse is wearing some kind of a protective boot, those devices make it exceedingly difficult to trim the hoof. Plus, they ruin good horseshoeing tools. Of course, that’s not what proponents are taking about, but I just want to point out that English is (or at least should be) as precise as possible. ‘Nuff said.

In general, “barefoot trimming” advocates assert that it’s better for horses to go without horse shoes. In support of their contention, they may point out—quite correctly—that horses in the wild don’t wear shoes. This shouldn’t be a surprise to anyone, since horses in the wild also lack many of the things that we typically associate with responsible horse owning, such as, oh, stalls, barns, readily available feed, deworming, vaccination, brushes, and, for that matter, farriers who might do any kind of trimming, barefoot, or otherwise.

On the other hand, horses in the wild do have some of the things that we typically don’t associate with responsible horse owning, such as starvation, predators, rattlesnakes, overpopulation, and such. Curiously, even though they are the state of things in nature, I don’t hear anyone, including barefoot trimming advocates, arguing for any of those things. Go figure.

NOTE: I’m not going to being to get into the various problems and controversies surrounding wild horses, but I do want to emphasize two things:

This, of course, isn’t exactly a revelation, and, come to think of it, I don’t recall ever seeing anyone advocate in utero shoeing, where the foal would come out wearing, say, a shiny set of half-rounds, and no one says that horse shoes are routinely found next to horse fossils, so I’m really not sure what the point is.

“Barefoot trimming” advocates may also say—quite correctly—that, in some horses, shoes can cause horses pain and/or lameness. As such, they may then conclude that shoes are bad. The fact that shoes can sometimes cause horses problems is also a bit obvious, at least to anyone that has been around horses and paying attention for, oh, say, a couple of weeks. But to me, pointing out that bad things can happen when you nail a shoe on a horse is a bit like pointing out the fact that fire burns down houses and buildings, and then concluding that we should ban all fires. As bad as fires can be in certain circumstances, I don’t recall ever hearing anyone advocating getting rid of fire, which, of course, can be charming, warming, romantic, and even somewhat essential in certain circumstances (see, for example, romantic, and especially when combined with wine).

REASON FOR DISAGREEMENT NUMBER ONE: The stated assumption that “barefoot is always better.”

REASON FOR DISAGREEMENT NUMBER TWO: There’s no such thing as a “natural” hoof conformation.

Assumption One. Let’s start by looking at studies that have been done on wild horses’ hooves, ones that have never been chased down and trimmed by even the most dedicated barefoot trimmer. Let’s see what “natural” really is. Let’s take a look at the wild Kaimawana horses of New Zealand.

In 2010, a study was published looking at 20 of these wild horses. Researchers found that there was no such thing as a consistent foot type. In fact, studied horses had a variety of hoof types, and many of the findings weren’t good. Not only that, but some of the studied horses also showed evidence of laminitis, which really isn’t good. You can CLICK HERE to read an article about the study, and you can CLICK HERE to read the abstract of the study.

And that’s not all. Studies on the feet of 100 wild horses in Australia were published in 2013. And those findings certainly aren’t good news for the “barefoot is always better” crowd. Investigators noted that the shape of the feet of the wild horses was affected by how far horses traveled, as well as the type of ground that they traveled on (e.g., how abrasive it was). They also found “marked differences” between conformation in the wild horses and in domestic horses from other, previous studies.

Further, in another study on the same group, the authors concluded that there was “overwhelming evidence of suboptimal [poor] foot health,” which agrees with the New Zealand study.

So, Dr. Ramey, what does this mean?

Quite simple, really. It’s probably not appropriate for the feet of wild horses to be set out as some sort of ideal model for horse foot health in general.

So, Dr. Ramey, what else does this mean?

If you can get folks believing in what you’re doing, no matter what the evidence, you might be on to something. After all, paraphrasing H.L. Mencken, no one ever went broke underestimating the intelligence of the public.

Assumption Three: Barefoot is not always better. In fact, the problems with barefoot were the reasons that people started putting shoes on horses in the first place. Before metal shoes, people were putting plants and leather and such on the bottom of horses hooves (there aren’t examples of them, because they’ve all decomposed). Soon, by the 6th and 7th centuries A.D, they started nailing metal onto hooves, presumably because metal shoes last longer than do leather and plants.

Why shoes? Because when horses run around on abrasive surfaces (like, say, dirt, or sand, which, by the way, are completely natural substances), their hooves get worn down. Among other virtues, horse shoes slow down wear on the hoof, and help protect it from trauma. For many horses, this is quite simply a godsend—it helps keep them sound.

In addition, some horses can be helped by various shapes and sizes of shoes, for a variety of conditions (that’s another discussion, or, more correctly, a whole bunch of ‘nother discussions).

Now I will be the first to admit that shoes may come at a price, when it comes to the function of the horse’s foot. But sometimes you have to give something to get something. If, say, the horse’s foot doesn’t expand as much as it might otherwise because there are nails in it, that’s certainly something to consider. But if it also doesn’t wear down in the sand, it’s often worth the trade-off.

Come to think about it, when it comes to barefoot, pretty much the exact same discussions come up when talking about the shoes people wear. A barefoot running shoe craze started in people a few years back, based on a lot of the same arguments that are made for horses. Turns out that the benefits of running in “barefoot” shoes are wildly exaggerated, and, in fact, there’s really no evidence at all that barefoot running is better for people. It works out OK for some people, but it isn’t good at all for others (CLICK HERE to read a scientific study about that). And, in fact, one of the companies that makes barefoot running shoes just settled a multi-million dollar lawsuit because of false claims that were made for the shoes. Not horses, of course, but instructive, nonetheless.

Finally, taking shoes off a horse can certainly be beneficial. For one, if a horse can get along without shoes, you’re going to save money. But for two, keeping a horse barefoot and following a consistent trimming schedule might be able to help change the shape of the foot in some horses. In 2011, researchers trimmed seven horses every six weeks for 16 months, and found that there were changes in the heel (and other stuff) that were deemed beneficial (CLICK HERE to see the study). Keeping a horse barefoot can sometimes be a reasonable option, but it does take time to work.

Honestly, when it comes to “barefoot trimming,” I’m really not very sure what the fuss is all about. Fundamentally, there’s a lot of basic science lacking when it comes to trimming and shoeing horses, and I think it’s a pretty good idea to have a lot of options when it comes to dealing with a horse hoof problems. I think you’re really pretty silly if you’re going to say, “My way or the highway,” or assert that one size fits all. When it comes most things, those sorts of approaches tend not to work very well anyway.

If you’re horse goes well without shoes, I think it’s great. But if your horse goes well with shoes, I think that’s great, too. Don’t pay too much attention to the “theory” that’s invoked in the name of this barefoot stuff, and certainly don’t be persuaded by anyone that tells you that “barefoot” is the only, or even the best, way to look after a horse’s feet. At the end of the day, your horse is going to tell you how things are going, at least if you’re paying attention.

Whew. I’m going to put my bare feet up now. On the couch.

Dr. David Ramey is a 1983 graduate of the Colorado State University School of Veterinary Medicine. In addition to being a full-time equine veterinary practitioner in Encino, California, Dr. Ramey is also an internationally recognized author, lecturer and blogger. Dr. Ramey is a vocal advocate for the application of science to medicine, and—as such—for the welfare of the horse.