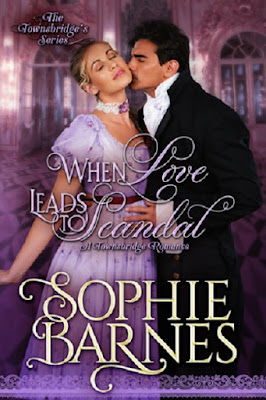 Unwrapping a Guest Review by Connie Fischer of WHEN LOVE LEADS TO SCANDAL, a Townsbridges novel by Sophie Barnes

Greetings my darling readers, I know I’ve been remiss in providing you reviews of good reads this past year and I apologize. Life has a hold on me which does not allow me much reading time. I have tried to make up for that in publishing my own good reads for you and I hope you’ve given them a try. So to make up for my neglect, I will be offering up guest reviews for you enjoy. I hope to be back reviewing for you soon but in the meantime, I hope you’ll enjoy my dear friend, Connie Fischer’s reviews to guide you to good reads. Enjoy and Happy Reading!
I present to you a guest review of WHEN LOVE LEADS TO SCANDAL, a Townsbridges novel by Sophie Barnes, published February 19, 2019.
Blurb for WHEN LOVE LEADS TO SCANDAL:
Two people fated to be together…
Recently engaged to the Earl of Langdon, Lady Bethany is content with the knowledge that she’s made a wonderful match for herself. Until a chance encounter with a handsome stranger makes her wish she was still unattached – a sentiment that grows even stronger when circumstance causes her to spend more time in this gentleman’s company.
And the duty that threatens to come between them…
Charles Townsbridge is not prepared to learn that the mystery woman he met in the park, the very same woman he cannot get out of his head, is in fact his best friend’s fiancée. Determined to do the right thing, he tasks himself with quashing the attraction, only to discover that the heart cannot be so easily controlled.
~*~*~*~*~*~*~
Connie’s Review:
London - 1820

Charles Townsbridge, age 26, son and heir of Viscount Roxley, enjoys taking a morning walk in the park. This morning, he hears a young woman calling for help to keep her bonnet from being blown into the lake. Charles grabs the bonnet and helps her and her chaperone to a bench to rest. He then excuses himself and heads home for breakfast. His is a close family consisting of his parents, two sisters, Athena and Sarah, and two younger brothers, James and William.

Lady Bethany Andrews is the daughter of an earl and is engaged to Robert, the Earl of Langdon. She became betrothed before she had been presented to society. Bethany had enjoyed briefly meeting Charles and was surprised to see him again that evening at a soiree. There, she discovers that Charles is the best friend of her fiancé, Robert. Robert is eager to talk with others about business deals and asks Charles to dance with and entertain Bethany. This irritates her as she feels he is treating her like a child. Charles is taken aback at Robert’s actions because he feels his friend should be spending time with his lovely fiancé. Bethany enjoys making architectural drawings which is quite unusual for a young woman but Robert disapproves saying she should be playing the piano instead, again irritating her.

Charles is invited to the Langdon estate for a two-week house party leading up to the wedding of Robert and Bethany. While at the party, Robert again ignores Bethany asking Charles to entertain her. Both of them are angry at Robert once again. Is there hope for a successful and happy marriage between Robert and Bethany?

Once again, Sophie Barnes has written a sweet romance that really shows what love is. Robert is a clueless clod who needs to change his priorities before he ends up a loser in life. Charles is the perfect hero that makes one sigh. I like Bethany because she is a smart, curious, and down-to-earth person. Great start to a new series. Cannot wait to read more.

Copy provided by the author in exchange for a fair and honest review.
WHEN LOVE LEADS TO SCANDAL, a Townsbridges novel by Sophie Barnes, self-published, available now at Amazon, Barnes & Noble, and Kobobooks.

Unwrapping a Guest Review by Connie Fischer of WHEN LOVE LEADS TO SCANDAL, a Townsbridges novel by Sophie Barnes