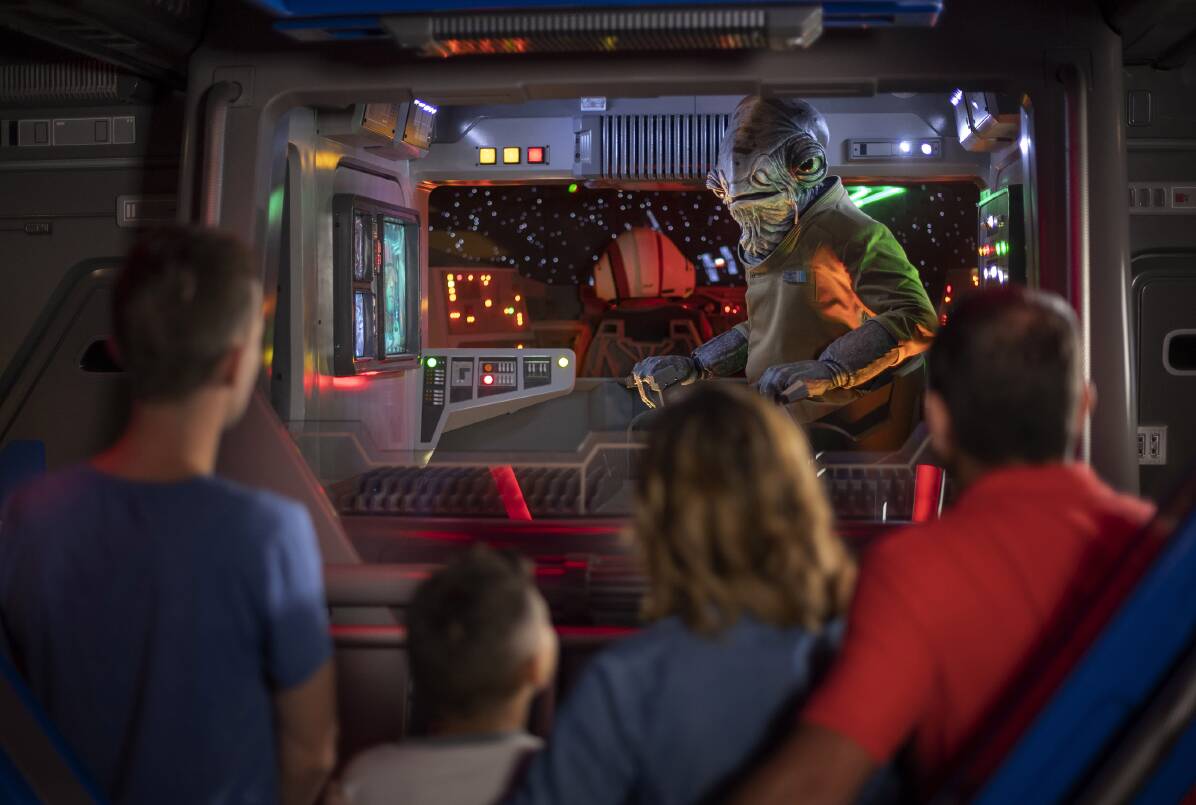 While shopping, eating, and taking a quick ride on the Millennium Falcon may constitute a full day’s worth of activities at a highly immersive theme-park land, they only sit on the backburner narratively speaking – and it is in terms of narrative that Star Wars: Galaxy’s Edge attempts to stand out from all the rest of the themed pack.

For the very first time, a theme park will help to tell the story of its source property in real time. Yes, that’s right – Galaxy’s Edge is set some five months after the 2017 film Episode VIII: The Last Jedi and some seven months before December 20’s Episode IX: The Rise of Skywalker, with Disney even going so far as saying that its events will somehow get referenced or will otherwise pay off in the new movie. And this is where Star Wars: Rise of the Resistance, the themed area’s second (and final) ride, comes into play – the skirmish that takes place between Poe Dameron and the meager forces of the Resistance, on the one hand, and Supreme Leader Kylo Ren’s ascendant First Order, on the other, will no doubt be the key event that has this greater narrative resonance.

It’s also the event that the Mouse House has promised to realize in far more depth than ever before, cobbling together an experience that is bigger in scope and more complex in its technological realization than any other it has crafted across Imagineering’s previous 65 years. That’s no small feat, and in order to bolster both of these audacious claims, Disney was kind enough to invite us out to get a sneak peek at Rise of the Resistance – including an early spin on the ride! – before its official opening on Thursday, December 5.

Here’s everything that we now know and saw during our participation in the Battle of Batuu.

Rise of the Resistance’s backstory

First, though, some perspective on how we got here.

As established in a whole slew of tie-in novels and comic books, the Resistance arrives on Batuu a full month (or so) before the events of Galaxy’s Edge, generally, and Rise of the Resistance, specifically, setting up its base camp in the long-abandoned ruins of the Ancients who were the first to settle the Black Spire Outpost region (events told in the novel Galaxy’s Edge: Black Spire). Although the First Order was quick to follow spy Vi Moradi and her small band of compatriots to the distant planet, it took some time for the neo-Imperials to fully understand the significance of the Resistance presence here – and, once it did, it arrived in full force, including a planetary blockade and the direct presence of Kylo Ren himself (as depicted in the comic book miniseries Galaxy’s Edge).

Tensions in the settlement start to simmer, with growing street protests and, even, some flashes of violence between the supporters of either side, until everything boils over in open warfare between the Resistance and the First Order – citizens of Black Spire are startled to see ship-to-ship combat suddenly playing out in the skies over their ancient, sleepy home (as seen in the young-adult book Galaxy’s Edge: A Crash of Fate).

Although not directly shown in any of these media, it’s probable that Vi Moradi, the founder of the Resistance’s Batuu presence, called in Poe Dameron, one of the highest leaders in the freedom movement, once she was tipped off that Kylo Ren himself was about to arrive on the planet in order to personally supervise the rebel cell’s destruction. This explains how guests are able to encounter Commander Dameron and his trusty sidekick, the lovable droid BB-8, in Rise of the Resistance – and how they, in turn, are able to holographically loop in Rey, the protagonist of the current film trilogy.

(Oh, one further probability established through all of these tie-ins: Kylo Ren might have an ulterior motive in arriving at Batuu in the form of hunting down any and all Sith artifacts he can get his grubby little Skywalker hands on; Dok-Ondar, it turns out, has quite the collection of ancient Force-related relics, some of which can be purchased by tourists for the right price.)

Rise of the Resistance’s ride experience

WARNING: from here on out, there will be some slight spoilers. Proceed at your discretion.

Such an integration into the broader Star Wars mythos may be impressive, but it’s an effort that doesn’t stop with the land’s and its rides’ backstories – it continues on into Star Wars: Rise of the Resistance’s ride experience, as well, with the Imagineers responsible for its design working hand-in-glove with Lucasfilm on crafting the whole premise and writing each page of the script.

From Lucasfilm’s perspective, Galaxy’s Edge is no different to the multimedia continuity it’s been so assiduously building since April 2014 (a continuity which already features such unique items as an original audiobook and virtual-reality videogame), and it is this approach that helps explain the brand-new character of Lieutenant Bek, a Mon Calamari Resistance officer who helps shepherd guests through “their harrowing journey,” first as an audio-animatronic in the queue and then, at the end of the ride, as a friendly voice in their ear. (While Bek may be specific to the ride [for now], the Mon Calamari play an outsize role in this particular chapter of the Star Wars saga, gifting General Leia Organa with an entire fleet of their galaxy-famous starships to comprise the new Resistance navy with [an event which occurs in the recently-concluded Allegiance comic book miniseries].)

This idea of blending the different facets of the overarching narrative actually continues on throughout all of Rise of the Resistance. Cast members working the attraction, for example, have adopted “personalities of First Order and Resistance troops,” Disney says, in order to “further deepen the immersive experience for guests.” It’s a small touch, but a surprisingly effective one – there’s nothing quite like being stared down by an employee in neo-Imperial regalia, asking you what’s so funny, while waiting to be interrogated by the supreme leader himself just down the hall. But all this pales in comparison to Disney’s grander effort of blending in the queue, preshow, and ride together, which helps explain why guests board the Intersystem Transport Ship (a type of motion simulator) and get deposited into the large-scale hangar of a massive Star Destroyer before boarding the ride vehicle proper. (Such experimentation only befits an attraction that bills itself as the most ambitious in Disney’s history, after all.)

Further bleeding over Rise of the Resistance into the Star Wars mainstream is its construction – since it was developed during the Episode IX: The Rise of Skywalker shoot, several of the actors (and, in at least the instance of Poe Dameron and his X-wing, some of the film’s sets) were brought over from the soundstages to record their footage for the attraction, helping to increase what Disney calls its “cinematic scale.” During riders’ recruitment at the Resistance base on Batuu, their flight to the Star Destroyer in the planet’s orbit, and their escape off of the capital vessel, they encounter the familiar faces of Rey, Finn, and General Armitage Hux in addition to Poe and Kylo Ren; expect to see them in both video and audio-animatronic form, ranging from Vi Moradi’s makeshift basecamp back on Batuu to the bridge of the imposing Resurgent-class Star Destroyer. Both instances of these characters’ realizations are executed almost flawlessly, with the animated figures in particular a true sight to behold.

This blend between the digital and the practical actually continues on all throughout the entire experience (resulting in “thousands of special effects,” Disney likes to brag). Full-size All-Terrain Armored Transports (the four-legged Imperial Walkers) loom large in one room, while countless stormtroopers on screens dot the Star Destroyer landscape. In one corridor, massive turbolaser cannons have to be ducked under while they fire on suddenly-arrived Resistance ships, which can be seen out the virtual windows located directly across the way from the guns. Blaster bolts incessantly ricochet around you, an effect which seems achievable only by magic. And then there’s the finale, when your trackless ride vehicle docks inside a motion base and then plunges down a drop shaft in a very convincing simulation of an escape pod being boarded and then fired down back to Batuu’s surface. The amount of detail, and the level of alchemy, achieved is nothing short of breathtaking.

And while these larger-than-life elements are all certainly noteworthy and immersive, there’s actually quite a few smaller components that also help to create a sense of place – and continue to push the theming boundaries that Rise of the Resistance so obviously obliterates in other areas. Loading onto the ride vehicles is perhaps the best example of this: there are no numbers on the floor to stand on while you await your turn to hop aboard, and there are no railings to help corral guests. When combined with the trackless nature of the vehicles themselves – it really does feel as if you’re moving freely throughout a First Order Star Destroyer – the sheer immersion is hard to top.

Forget all the story tie-ins and new characters and Star Wars references – this alone is enough to make Rise of the Resistance one of the most compelling attractions out there.

Star Wars: Rise of the Resistance opens on December 5, 2019.

Discuss Star Wars: Galaxy’s Edge and Rise of the Resistance with thousands of other die-hard fans in our OI Community Facebook group.