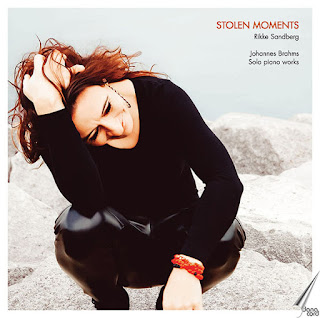 Rikke Sandberg, one the toasts of the Danish music scene, gets her premiere Danacord CD off to a superlative start. Brahms’s c.1877 transcription of Bach’s Chaconne from the Partita in D minor for violin solo BWV 1004 is certainly not a work to be approached lightly. Brahms wrote that this Chaconne was one ‘of the most wondrous, unfathomable pieces of music ever written. On a single musical stave, writing for a small instrument, this man [Bach] creates a whole world of the most profound thoughts, and the most powerful emotions.’ Many listeners will know Busoni’s magisterial reworking of this piece: the Italian composer brought all the resources of a modern concert grand, high romantic piano technique and quasi-orchestral colourings. Brahms adopted a more restricted approach by limiting himself to the virtually the music that Bach wrote, reworked for the left-hand only. There is a depth and sincerity in this music that come close to surpassing Bach’s own intent. Rikke Sandberg introduces a strong rhythmic strength as well as clarity of line and a clear understanding of the work’s massive formal structure. It would be educational to hear what Sandberg made of Busoni’s transcription.
I have not consciously listened to the Variations on a Hungarian Song, op.21 no.2 in D major. Brahms wrote this work around 1854. The theme was given to him by his friend and associate Eduard Reményi. These 13 variations plus a finale are very short, lasting just over eight minutes. The first eight feature alternating waltz and common time signatures.   There is a great deal of interest in this rather lop-sided, but enjoyable, piece. Each variation is over in a flash, with the much longer finale, working through several keys bringing the work to an exuberant conclusion. I was especially impressed by Rikke Sandberg’s playing of the more intimate middle variations of this piece.
Most listeners will have heard some or all of Brahms’ Hungarian Dancesin their orchestral or their piano duet versions. What amazes me with Sandberg’s account of the 1st and the 4th dances in their solo piano arrangement is the impression that there are four hands playing and not just two!  It is a remarkable performance. Look out for the ‘indescribable mixture of clicking and banging, whirling and whistling, gurgling and half singing effects’ in the F# Dance.
Brahms Eight Piano Pieces (Klavierstücke), op. 76 were written over a seven-year period, when he was interested in writing what are classified as character pieces. This was some 15 years after his last piano piece, the Paganini Variations. The only problem was that he was seemingly stymied in choosing ‘characteristic’ titles. Hence, in this group we have four capriccios and four intermezzos. It is also a moot point as to whether these eight pieces should be played as a group. The designation of Capriccio is not an outgoing piece, but one that simply follows the composer’s whims, whilst being written with a strict formal structure.  The Intermezzos are typically slower and more restrained in their performance, whilst the Capriccios are faster paced and often display considerable dynamism.  There is certainly a balance of mood between the pieces that reflects Brahms growing introversion. They are beautifully played by Rikke Sandberg who manages to capture the feeling of regret that haunts all these pieces, whatever the tempo.
The recital closes with the Intermezzo from the Seven Fantasias (Fantasien) op.116. This a quiet, reflective piece that successfully explores the depths of sadness without ever sinking into self-pity. The heart of the work is the ‘ethereal’ mood of the middle section. This is music that surely brings calm and resignation to the soul. It is perfectly contrived on this recording.
I was a little disappointed with the liner notes. It would appear to constitute the soloist’s thoughts on the programme. There is no descriptive or historical analysis of this music. Even the dates of each piece are not included. There is a biographical note about Rikke Sandberg.
I enjoyed this exploration of Brahms’s music and was delighted that some of the works included are less-well-known. The highlight for me was the first and the last tracks: the superb realisation of one of Bach’s masterpieces and the deeply felt sorrow of this Intermezzo.
Track Listing:
Johannes Brahms (1833-97)
Chaconne from the Partita in D minor for violin solo by Johann Sebastian Bach BWV 1004 (arrangement for piano: left hand only) (c.1877)
Variations on a Hungarian Song, op.21 no.2 in D major (1853-56)
Two Hungarian Dances (arranged for piano solo) no.1 G minor & no.4 F# minor (1869)
Eight Piano Pieces, op. 76 (1871/78)
Intermezzo op.116, no.2 in A minor (1892)
Rikke Sandberg (piano)
Rec. Nødebo Kro 25-28 June 2018
DANACORD DACOCD 835
Source: landofllostcontent