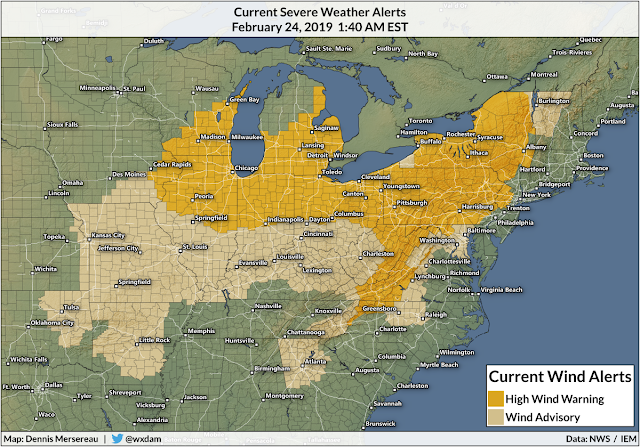 Power Outages Likely as Intense Winds Blow Across Much of the Eastern U.S. on Sunday

An intense windstorm will rake much of the eastern United States on Sunday as a powerful low-pressure system tracks across the Great Lakes. The storm system in question is part of the same upper-level trough that brought rare winter weather to low elevations in southern California and the desert southwest on Thursday and spawned dangerous severe thunderstorms in the southeast on Saturday. Wind gusts topping 70 MPH in some places could lead to widespread power outages and tree damage.
The most striking feature on weather maps going into Sunday was the giant splotch of wind advisories and warnings covering all or part of more than 20 states. The criteria for a wind advisory or a high wind warning differs from region to region, but the gist is that winds will get high enough on Sunday to knock down trees and power lines, especially where the ground is saturated from recent heavy rains.

Blizzard warnings supplant some of the wind advisories to the west of where the alerts on this map stop, including in the northwestern part of Michigan's Lower Peninsula, as well as parts of Iowa, Minnesota, and Wisconsin.

Intense wind gusts are likely on Sunday due to a low-pressure system explosively intensifying as it moves northeast across the Great Lakes. The low will undergo what’s known as bombogenesis, a process that’s often referred to as “bombing-out” or (annoyingly) a “bomb cyclone” in news coverage.

Bombogenesis occurs when the minimum central pressure in a cyclone drops by 24 millibars or more in 24 hours. The low had a minimum pressure of 994 mb as it moved over eastern Iowa at 10:00 PM EST on Saturday. By Sunday afternoon, the low will be near the Great Lakes with a minimum pressure of about 975 mb, which represents a 26 mb drop in 24 hours.
An intense low-pressure system that’s rapidly intensifying is prime territory for intense wind gusts. The strongest wind gusts will occur near the Great Lakes where winds could top 70 MPH at times. The windstorm could be particularly severe in western New York, where a long fetch over Lake Erie will allow winds to gust to 75 MPH near the coast.
Not only will the winds cause damage, but this storm could result in a significant seiche on Lakes Erie and Ontario, potentially leading to major coastal flooding on the eastern shores of the two bodies of water.
Here's what NWS Buffalo had to say about the coastal flooding potential on Lake Erie in their forecast discussion published at 1:17 AM EST on Sunday:

ALONG THE LAKE ERIE SHORE...LAKESHORE FLOODING IS EXPECTED, AND THIS IS LIKELY TO BE A HIGH END EVENT. GUIDANCE SUGGESTS THE  WATER LEVEL AT BUFFALO MAY EXCEED 11 FEET ABOVE LOW WATER DATUM.  THE WILDCARD IS HOW MUCH THE LAKE ICE WILL RESTRICT THE SEICHE.  DURING A MODEST WIND EVENT A FEW DAYS AGO, SATELLITE IMAGERY SHOWED THE ICE ON LAKE ERIE MOVING, SUGGESTING IT IS NOT FAST ICE AND THE WIND WILL BE ABLE TO MOVE THE WATER AND ICE SIGNIFICANTLY.

AS A RESULT, THIS MAY IMPACT SOME LOCATIONS WHICH ARE NOT
TYPICALLY IMPACTED. FOR REFERENCE, WARNING CRITERIA IS 8 FT. IF
THE WATER LEVEL AT BUFFALO EXCEEDS 10 FEET ABOVE LOW WATER
DATUM, FLOODING MAY OCCUR AT CANALSIDE AND IN THE OLD FIRST WARD SECTION OF BUFFALO.

THE HIGHEST WATER LEVELS WILL BE SUNDAY AFTERNOON AND EARLY SUNDAY EVENING.

A seiche occurs when the water in a lake sloshes back and forth like a wind-induced tide. Think of a child sliding back and forth in a bathtub—gradually causing larger waves on either end of the tub that eventually splash over the edge and make a mess—just occurring on a much larger (and slower) scale. A wintertime seiche on an ice-covered lake is particularly dangerous because chunks of ice could cause damage to structures along the coast, in addition to the ice chunks causing additional flooding on top of what's already occuring.
Make sure you've got batteries and actual flashlights—not just the flashlight feature on your cell phone—as well as some non-perishable, ready-to-eat foods just in case the power goes out for an extended period of time on Sunday. You can keep track of power outages over at PowerOutages.US, a great resource for real-time power outage information across the country.
You can follow me on Twitter or send me an email.

Power Outages Likely as Intense Winds Blow Across Much of the Eastern U.S. on Sunday