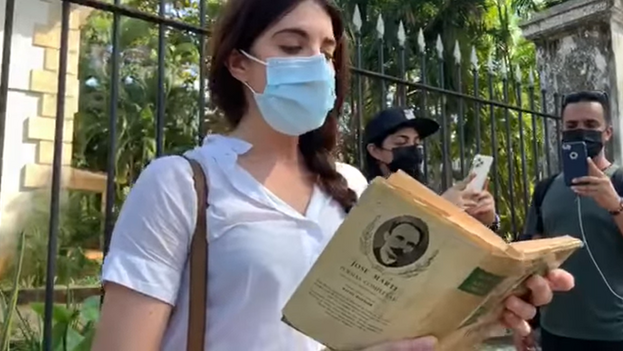 14ymedio, Havana, 25 March 2021 – The criminal case against Carolina Barrero for “clandestine printing” has been shelved this Thursday, as she herself confirmed on her social networks.

“Together we can build a culture of law, we have to know that we can defend ourselves against arbitrariness and fight for our legal rights,” she wrote on her Facebook wall. “Today we have won. At the Infanta and Manglar station I was notified that the proceedings are being archived according to Article 8, subsection 2 (8-2) of the Penal Code and I was given the seized iPad.”

The article cited says that “the act or omission is not considered a crime, even including the elements that constitute it, as it lacks social danger due to the limited nature of its consequences and the personal conditions of its author.”

A police file was opened on the historian on February 7, after an interrogation in which a State Security agent urged her to return to Spain, where she currently resides, for making and disseminating drawings of José Martí wearing a shirt with stars.

According to what Barrero told 14ymedio on that occasion, State Security also searched the house where she was staying in Old Havana and seized her iPad, the printed drawings, and some pages with signatures collected online demanding the resignation of the Minister of Culture Alpidio Alonso.

“State Security accuses me for this printed image. It is a Martí made of stars, with the trace of the tenderness and the dream. There is not a hint of offense in that drawing, it is all respect and illusion,” Barrero wrote on her social networks, During the interrogation Barrero availed herself of her right to remain silent and did not comment on the accusation. “If they are going to build a case against me for this to put me in prison after a summary trial like they do, let it be clear to them, they are not going to blackmail me or threaten to build an alleged crime. I told them yesterday, I did not hide making it, I would print it a thousand times. ”

The complaint against Barrero was made by Lieutenant Colonel Kenia María Morales Larrea, an officer who has dedicated herself to threatening artists like Tania Bruguera in recent years. Morales has also participated in police searches of the homes of activists and independent journalists.

COLLABORATE WITH OUR WORK: The 14ymedio team is committed to practicing serious journalism that reflects Cuba’s reality in all its depth. Thank you for joining us on this long journey. We invite you to continue supporting us by becoming a member of 14ymedio now. Together we can continue transforming journalism in Cuba.