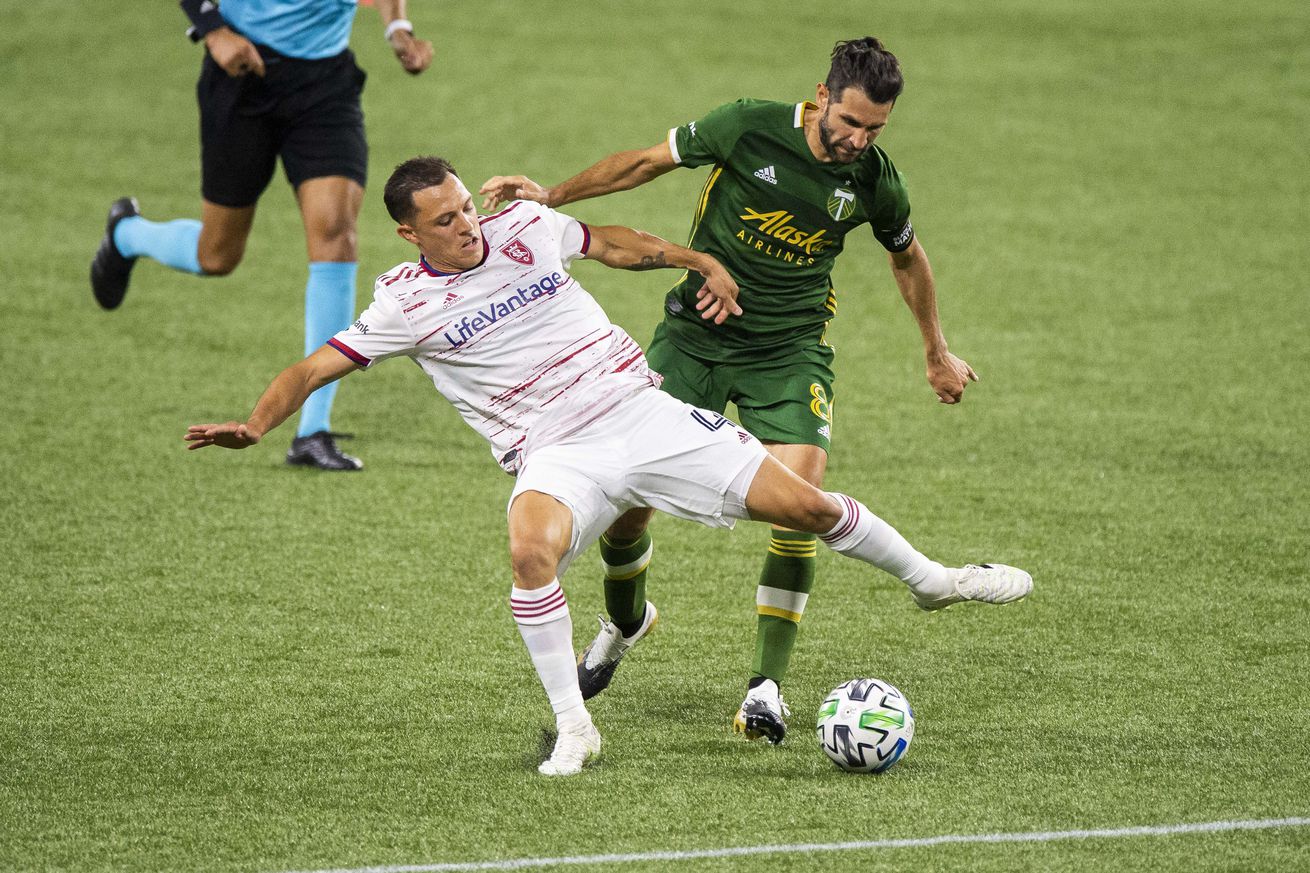 RSL, trailing 4-2 going into stoppage time, earned a point thanks to goals from Giuseppe Rossi and Sam Johnson in the dying moments of the game.

Real Salt Lake earned a point on the road in Portland thanks to a miraculous comeback in stoppage time. RSL trailed 4-2 going into extra time, but goals from Giuseppe Rossi and Sam Johnson solidified the draw, earning the visitors a point in a 4-4 final score line.

Portland opened the scoring early on as midfielder Diego Chara capitalized off an Andrew Putna mistake. Off a restart, Putna sent the ball calmly to Nedum Onuoha, who gave the ball right back to him. Putna then tried to pass to Pablo Ruiz, but Chara came quickly from behind to steal, and sent it right into the net giving the home team a very early lead off a terrible gaffe by Putna.

RSL was able to answer not too long after as Corey Baird found the equalizer. A free kick from outside the back found its way to the head of Marcelo Silva, who pushed it back in the middle toward Maikel Chang. Chang let a shot rip but it was blocked by a defender. Baird collected the rebound and was able to slot it into the net to tie the game up in the 19th minute.

Unfortunately, the Timbers found their answer just two minutes later when Jaroslaw Niezogda headed in the ball off a corner to give the home team the lead again.

RSL came out in the second half with a renewed sense of purpose, putting the Timbers on their back foot from the first minute. It paid off when Karate Kreilach made his return, with Damir able to levitate and put the ball in the net off a header originating from a corner kick. Kreilach’s fourth goal of the season was enough to equalize the game at 2-2.

Portland took the lead back when Sebastian Blanco gave the Timbers their third goal with a world class left-footed shot that no ‘keeper could have saved.

Just as RSL thought they had another equalizer as Onuoha’s shot off a corner kissed off the far post, the Timbers went on the counter and Felipe Mora was able to get the ball in the net past Putna to seemingly put the game out of reach as the Timbers went up 4-2.

Not to be completely defeated, RSL found a way to close the gap as Giuseppe Rossi sent home a left-footer in the 90th minute.

It wasn’t over, as RSL had one more in the bank thanks to a beautiful play from Corey Baird, dribbling through a couple defenders and laying the ball off to Sam Johnson. Sammy let a quick shot rip and beat Clark, finding the equalizer in what would prove to be the last important play of the game, equalizing for RSL in the dying seconds of the game.