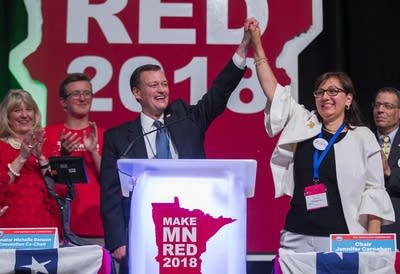 Minnesota’s Republican Party won’t hold an in-person state convention next month due to the coronavirus situation.

Republican Party Chair Jennifer Carhanan said Tuesday there will be a virtual convention in place of the traditional convention that was supposed to be held May 15-16 in Rochester.

“I just didn’t see a scenario where we would be able to have 4,000 people gathered in an arena 11 days after the shelter-in-place is lifted, assuming it lifts on May 4th,” Carnahan told MPR News in a phone interview.

Carnahan said CDC guidance to limit large gatherings for the time being also factored into the decision. Carnahan has been among the state’s Republicans urging Gov. Tim Walz to let Minnesota businesses reopen quickly.

Even if the state’s restrictions came off, Carnahan said “as an organization we did not anticipate that means you could go from zero to 60 in 11 days.”

The lack of an in-person state convention deprives the party of one of its key liftoff moments of the election year. A delay wasn’t feasible because Minnesota’s candidate filing deadline arrives in early June.

That means the party will endorse a U.S. Senate candidate and select national convention delegates in an online gathering. Voting will happen through mobile or computer applications.

“We just need to keep chugging forward with the party’s business,” she said.

All of the party’s local conventions this spring have been held over the internet and congressional endorsements will happen that way, too, next week.

There is a silver lining. Carhanan said Republicans were able to cancel their convention contracts with full refunds due to the circumstances, and people who would have had to spend personal funds to attend will see savings as well.

On a conference call Monday, Republican National Committee Chair Ronna McDaniel said no decisions have been made on the party’s national convention set for late August in Charlotte, N.C. She said the party is required to hold an in-person convention of some kind.

Minnesota Democrats haven’t said what will happen with their late-May state convention, which is also set for Rochester.

National Democrats have already delayed their convention from July to August. It is scheduled for Milwaukee, although presumptive nominee Joe Biden has raised doubts about the ability to hold a typical convention, given the pandemic.