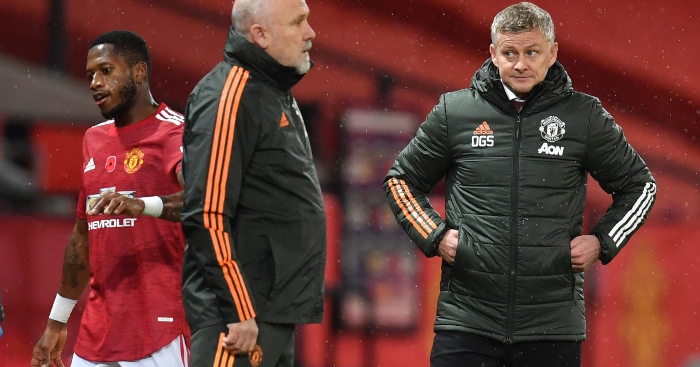 Solskjaer’s biggest mistake was starting Fred, not leaving him on…

Ole Gunnar Solskjaer should not need the gift of hindsight to recognise that he mis-managed Manchester United on Wednesday night. Everyone watching from their sofas could see that Fred was not going to last the 90 minutes against PSG. Solskjaer should have ensured that the midfielder’s exit was at his behest rather than the referee’s.

But it could be argued that Solskjaer’s biggest error was not persisting in the forlorn hope that Fred would be on the pitch come the end, but rather that he should not have been there at the start. Did United, again, need both Fred and Scott McTominay patrolling the grass in front of their back four?

There is certainly a stronger case for two defensive midfielders when the visitor is PSG rather than West Brom. But in between hosting the Baggies and the Parisiens, Solskjaer had stumbled upon the closest thing to balance that the United midfield has shown all season.

Against Istanbul Basaksehir last week, Solskjaer paired Fred with Donny van de Beek at the base of his midfield. The Holland international made a huge difference to an area of United’s side which so often looks stodgy, one-paced and devoid of adventure.

Van de Beek’s passing, usually one-touch and penetrative whenever possible, offered United a dimension that McTominay, Fred and Nemanja Matic cannot. That 4-1 victory and Van de Beek’s role in it should have brought Solskjaer a rare moment of clarity amid the customary chaos at Old Trafford. But the manager has so far chosen to ignore it.

"He showed why he's so highly thought of in European football."

"He will make other players tick and perform better."@rioferdy5 and Paul Scholes liked what they saw as Donny van de Beek ran the show in midfield for Man Utd

Against Southampton, Solskjaer changed the system to yet another iteration of the diamond midfield with Van de Beek shunted to the left side. For PSG, he returned to a 4-2-3-1, which seems to be his preferred formation even if he is yet to fathom how best to use it.

Ideally, Paul Pogba would partner a screener in the deeper midfield area. Pogba, we know, has the physical and technical attributes to play in the position but seemingly he lacks the the will, the discipline and the nous to recognise that this is the role in which he can best and quickest rebuild his reputation as one of the game’s finest midfielders. Instead, he appears content to sit on the bench in the assumption that Real Madrid will still come to his rescue.

Van de Beek, though, is aching for the chances that Pogba has blown. Alongside a more defensive-minded holder, McTominay or Matic for now, Van de Beek can carve out a niche for himself, especially while there is little opportunity to do so in a more advanced position.

At least with Van de Beek, his attributes are clear. With Fred, two-and-a-half years after he arrived at Old Trafford for £52million, it is not yet entirely clear what he does best.

His current duties centre around winning the ball when United don’t have it, and when they do, keeping it moving, ideally in a forward direction towards the more creative talents. But according to Whoscored, Fred has attempted the seventh most tackles per game of the Premier League’s defensive and central midfielders and ranks 18th for tackles won. Of the league’s more regular starters, only Conor Gallagher has been dribbled past more often on average, and 25 midfielders are averaging a higher number of interceptions.

In possession, his numbers are no more impressive. There are 27 midfielders with more key passes per game this season, while 33 have made more dribbles.

There is no doubt that Fred’s form is much-improved but that reflects the horribly low bar more than anything else. Still, for that improvement; for coming through a quite dreadful first year at Old Trafford; and for demonstrating that he is more worthy of Solskjaer’s trust than Pogba, he deserves credit. But that should be offered in the form of a pat on the back and a place on the bench, rather than a pivotal role in United’s XI.

Troy Deeney revealed that United’s opponents were regularly singling out Fred as a weakness in the United side and his first touch was the trigger for a thousand presses. Against PSG, that flaw cost United their 11th man, albeit belatedly. Solskjaer cannot afford to place such responsibility at such clumsy feet.

The lack of a mobility among his three screeners is most likely at the root of Solskjaer’s misguided belief that he always needs two of them. But even in the short-term, before United can at least pretend to look for a top-class defensive midfielder to partner Van de Beek, the manager has more to gain than he has to lose by giving his most expensive summer signing a run of starts between the boxes.

The post Solskjaer’s biggest mistake was starting Fred, not leaving him on… appeared first on Football News -.

Solskjaer’s biggest mistake was starting Fred, not leaving him on…